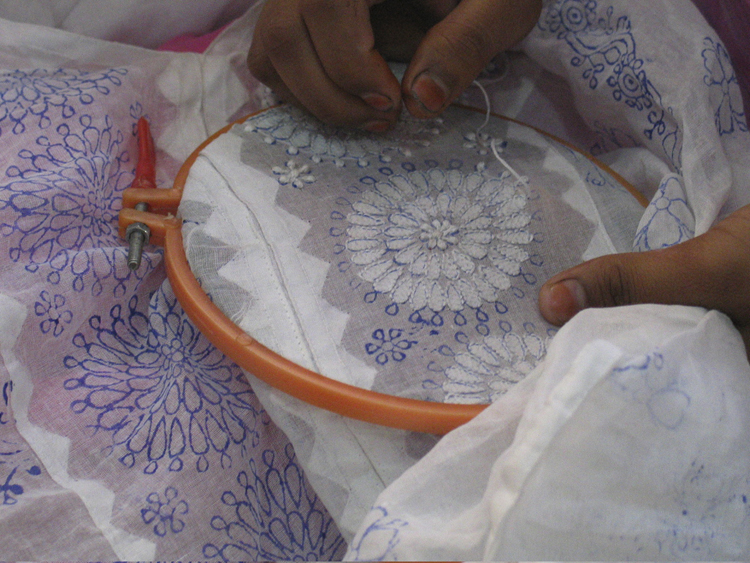 The craft of Chikan work, often referred to as Lucknow Chikan, is over 400 years old with a firm presence in the Indian and global fashion arena. The technique of its creation is called Chikankari and its unique sensibility flaunts grace and elegance as subtly as the wearer pleases. 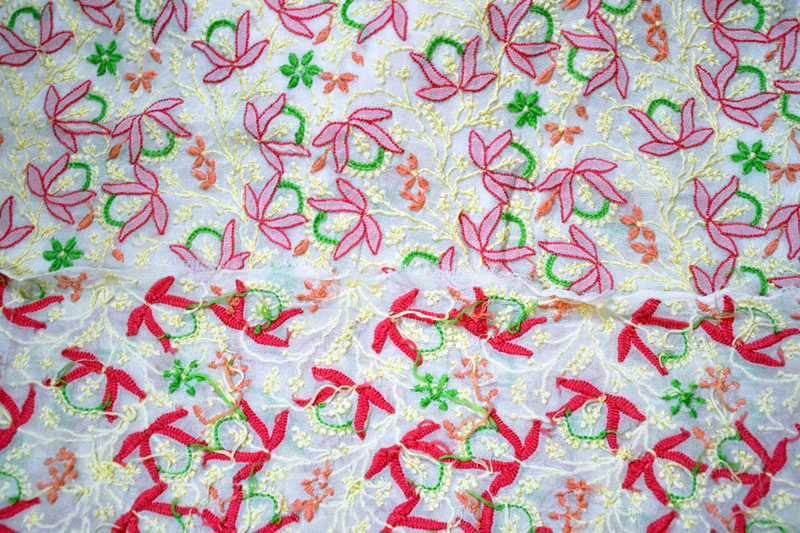 While the word Chikan quite literally means embroidery, the art form incorporates approximately 36 different stitching techniques that in modern times are often combined with embellishments of pearls, mirror and Mukaish. Though traditionally it was done on Muslin cloth, white thread on white fabric, today it can be seen on various fabrics and colors, popularly pastels. While its central hub and place of origin is Lucknow, Chikan work has spread far and wide within India, with West Bengal and Awadh also specializing in its production.

Some historians have recorded the presence of Chikan as early as the 3rd Century AD during the reign of Changragupta Maurya, but the exact origin of this technique remains a mystery to date. Another common tale behind its history relates the Mughals introducing this Persian craft to India in the 17th Century. The Mughal Emperor Jahangir’s consort, Noor Jahan, was a known talented embroiderer with a particular fondness for Chikankari work. Jahangir was also enamored by this craft and lavished it with his royal patronage. He established several workshops to hone and perfect this art form. In this era, the fabrics used were mostly Muslin or Mulmul as they were best suited for the warm, humid climate.

After the downfall of the Empire, Chikankari artisans spread all over India and founded various centers for re-establishment in the 18th and 19th Century. Lucknow was the main one with Awadh as a close second. The then Governor of Awadh, Burhan Ul Malk, was a Persian nobleman and Chikan work beneficiary who had a major role in restoring this craft to its former glory, which in many ways stands till date.

There are hardly any garments with Lucknow Chikan work that don’t use floral patterns or motifs. Due to the strong influence of Persian aesthetics on this craft, flowers have been a staple in Chikankari designs. The types of flowers (including their stems, Buti, leaves and Paisley motifs), as well as their stylizations, have varied throughout time to keep up with fashion trends, but in general have remained fairly intricate and delicate.

The Making & Artisans Behind Chikankari

The Lucknow Chikankari technique can be most easily broken down in to 2 parts; the pre and post preparation stages and the 36 types of stitches that can be used in its embroidery phase. The basic 3 stage process of all Chikankari work is:

This is the initial phase where the design is made on the cloth of choice. The cloth is cut according to the garment it will form and using multiple wooden block stamps, designs are imprinted in blue ink on to the fabric.

This fabric is then set within a small frame, part by part, as the needle work begins to trace the ink printed patterns. The type of stitch an artisan chooses depends on the specialty of the region and the type and size of motifs.

Once the embroidery work is complete, the fabric is soaked in water to remove the pattern outlines. After this it is starched to obtain the right stiffness depending on the fabric.

Usually there is a combination of different Lucknow Chikankari stitches used within one whole pattern. These include: Makra, Kaudi, Hatkadi, Sazi, Karan, Kapkapi, Dhania-patti, Jora, Bulbul and many more. There are also 10 principle stitches made from raw skeins of thread:

• Jali: A specialty of Lucknow; this technique uses minute buttonhole stitches with a wide blunt needle to make a Jali or net where the thread in never drawn through the fabric, making it impossible to distinguish the front from its back side.

• Tepchi: This is a long running stitch that is weaved on the right-hand side of the fabric and forms the outline of a motif.

• Murri: This is a minute rice shaped design used in minimalistic and intricate patterns.

• Bakhiya: Also called shadow stitching; here, the thread work is done on the back side in order for its outline and tint of color to be seen on the front side of the fabric.

• Zanzeera: This is a chain stitch made to design the outline of leaves and petals especially when they are connected within their pattern.

• Hool: This is a detached eyelet stitch used to design the heart of the flower.

• Phanda: Millet shaped stitches; these are used to make vines of flowers and grapes.

• Rahet: This is mostly a single stitch technique used to create plant stem designs, however can also contain a double stitch using the Bakhiya technique.

• Keel Kangan: This stitch is mainly used to adorn floral motifs and petals.

• Khatua: Considered a finer form of Bakhiya and used for flowers and paisleys, the motif is first weaved on a calico and then placed on the main fabric.

Originally Chikan work was done on Muslin or sheer cotton cloth with white thread. Over time, more colors have been incorporated including pastels and fluorescents. The fabrics used for this craft must be soft as hand stitching is required. They include: Silk, Chiffon, Georgette, Net, Voile, Kota, Doriya, Organza, Cotton and faux fabrics.

There is a tremendous variety of garments that come adorned with this type of work, for men as well as women. This includes everything from long and short kurtas, tunics, sarees, Anarkalis, palazzos and Capri pants to a range of accessories such as shoes, bags, belts, lamp shades, table cloths and cushion covers.

Lucknow Chikan embroidery has ebbed and flowed since its initial formal establishment. Its golden years in the period of Mughals and Nawabs were followed by a major downfall in later years during the British Rule. 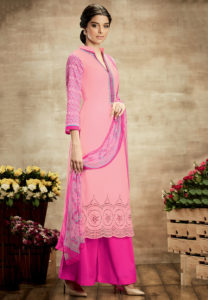 Only during the Industrial Era did Chikan begin to re-emerge with the same popularity it had before. It took no time in being commercialized. The Bollywood Film fraternity, as well as smaller design enterprises, played a big part in nationally restoring the respect and appreciation Chickan work always deserved.

Thus, undoubtedly, the sheer variety of Lucknow Chikan work today is more bountiful than ever before. It is greatly in demand by the general urban masses, upper classes and celebrities in Bollywood and Hollywood alike.

During the Lucknow Chikan craft’s eventual revival during the industrialization era (in the 1980s), commercial copycats and pocket-friendly imitations emerged. New fabric blends and machine embroidery was introduced to cut production costs. Then, with the start of the recent, profit-oriented era in Indian fashion, small and big designer houses began to add crystal, Mukaish and Zardozi elements to Chikan for a more opulent aesthetic.

Lucknow Chikan embroidery should ideally be dry cleaned, though this depends more on the fabric than the work. Some fabrics, such as silk, need to be dry cleaned but others, like cotton, can be hand washed.

• Lucknow Chikan embroidery is highly time consuming and skilled work for which artisans can be trained for up to 20 years.

• Depending on the pattern intricacy and size of the piece, the embroidery process alone can take up to 10 days to complete.

• Ustad Faiyaaz Khan and Hasan Mirza Saheb are two of the most renowned Chikan artisans of Lucknow and have mentored many students under them.