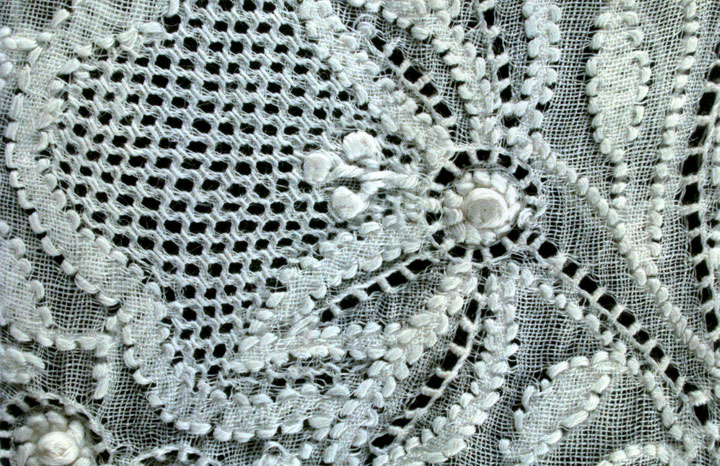 Jaali work is a technique that is somewhat similar to threadwork and involves making holes in the fabric. However, the method of doing so is different from the tradition of punching holes in to the cloth. Jaali work involves pulling the warp and weft threads apart with a needle without breaking the continuity of the fabric. It did not emerge as a form of embroidery on its own. This is a technique that is used in chikankari work, which is a specialty of Uttar Pradesh, India. A jaali on fabric is also known as a trellis.

There are many forms of stitching and embroidery that have emerged over the ages as first a need and then a commodity. The need to tailor garments and mend holes was the basis of many of the most basic stitches that one sees in India. Other, more sophisticated forms, however, have been invented when the art of tailoring became a commodity, therefore increasing the demand on sophistication and embellishments in clothing. While embellishing with stones and thread is an option, in the earlier days it was a slightly more expensive option. The more convenient, affordable yet artsy choice was to use the thread and the weave of the fabric in itself for embellishing the garment. This seems to be the background to the origin of the Jalli technique in chikankari stitching.

Chikankari in itself flourished during the Mughal times and was known as a very fine art that was meant for royalty and nobility.

It is said that Noor Jahan, queen to the Mughal emperor Jahangir, took a special interest in Turkish architecture. Wide open designs and the visual effects of a jaali i.e. lattice screens in concrete fascinated her. The desire to replicate the jaali or lattice screens in concrete onto fabric is what inspired the creation of this technique in chikankari. In fact, one can also witness lattice screens-like structures in Mughal architecture i.e. palaces and forts as well. It became a hallmark for them. 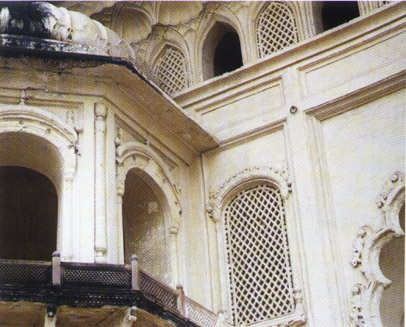 One of the things that are special about chikankari is that it has a repertoire of about 40 stitches and the artisans who specialize in one kind of stitch will do only their piece on the garment. For instance, the artisan responsible for filling work on the garment cannot create the jaalis on the fabric. This can be thought of as one of the earliest forms of the ‘assembly line’ in the history of embroidery.

The work of producing a jaali onto the cloth is done by warp and weft threads are pulled apart with a needle and tightened to give the cloth the appearance of a net. This makes holes with a regular circumference and also ensures that the strength of the fabric is not compromised. The artisan then works around the jaali or net to fill in the cloth.

The effect that jaali creates is similar to that of what a net fabric does. It serves to make the garment look more elegant and light. Although jaali work in itself is one technique applied in chikankari, it has many varieties within itself. There are a couple of straight line jaali stitches that are known as hathkati and bank jail. Other more commonly seen forms of jaali stitching are bulbul chashm, makra, mandrazi, phool jaali, sidhaul jaali and Tajmahal.

The most used motfs on chikankari clothing are blossoms, vines, leaves and buttis. Within this jaalis are created. 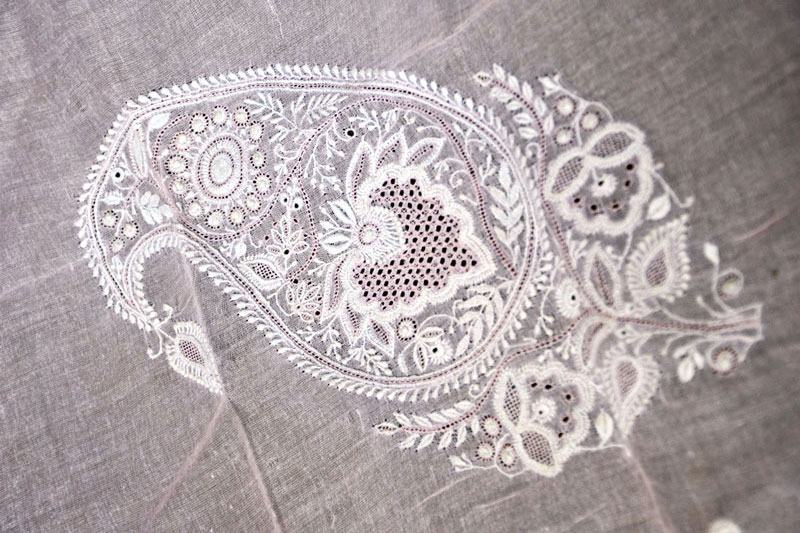 Chikankari clothing is one of the most widely known forms of Indian embroidery, across the globe. It has been seen on many internationally renowned runways and ramps that by some of the best Indian designers who are revered the world over. However, the art of chikankari is dying out in India. The practicing community has severely diminished in number and the threadwork done by the current artisans is not as fine as what it once was.

Although the technique of creating jalis has been noticed by many across the world, its point of origin is no longer a flourishing art. Many designers and governmental agencies who believe in the preservation of traditional art forms are actively trying to find ways to promote this form of embroidery.

Because of its rise in demand and decline in production, the prices of fine chikankari garments have automatically risen.

Due to the way the jaali is created, the fabric is not compromised and is just as strong as it was meant to be. Therefore, maintenance of the garment becomes easy. Regular washing and ironing techniques are fit for garments with jaali work on them.