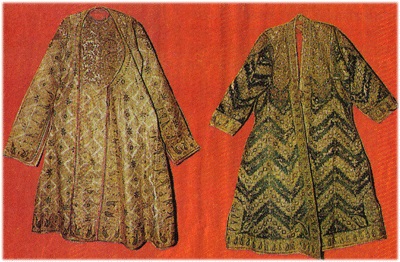 The Chogha and Atamsukh are types of over garments worn by men in the Mughal times. When translated, the word chogha means ‘cloak’ while the atamsukh literally means ‘giver of comfort to the soul’. Versions of the Chogha and Atamsukh brought to India from invasions of the Mughals as well as the indigenous attire present in Rajasthan probably coexisted at some point in time. Although this clothing style has been innovated with, the general style of draping as well as the fashion of wearing an over-garment still persists in many regions in India. This custom is especially prevalent in areas like Rajasthan and Gujarat where the weather necessitates the wearing of a protective outer-garment. 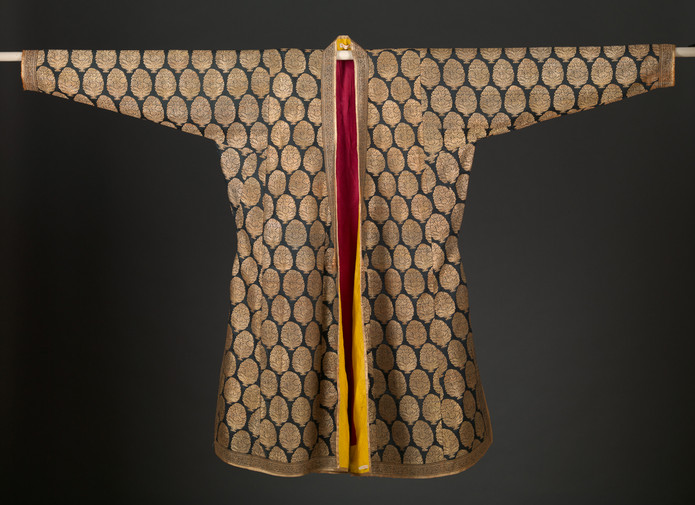 The Chogha and Atamsukh brought to India by the Mughal invasion is said to have originated in Turkey. However, it became a part of the cultural heritage of India in 1525 when Babur invaded the country. While this is the only known point of origin of the chogha and the atamsukh as part of India’s cultural heritage, it has always been a part of Rajasthani aristocratic attire. Whether the inclusion of these garments into Rajasthan’s royalty happened before or after the Mughal invasion is still unknown.

The garment itself was initially created in woolen and light, silken material. While the former was used in winters, the latter was used in summer months because it is light and porous. Moreover, the traditional chogha and atamsukh had some of the most elaborate and exquisite embroideries on them in threads of precious metals as well as exotic looms in various colors. Besides threadwork, there were a number of different embroidery forms that were worked in different motifs onto the garment that gave them a luxurious and grand look.

Both the choga and the atamsukh have been invented as garments to beat the weather. Whether summers or winters, in an era where there was no mechanized system of heating or cooling, garments that naturally made the wearer comfortable, were needed. The inspiration for the atamsukh came from the need for developing an article of clothing fit for a king that would also keep him warm, in style.

The chogha and atamsukh were prominently worn in royal courts so often that artisans from Banaras or Varanasi in Uttar Pradesh and Dhaka in former East Bengal (currently known as Bangladesh) would prepare customized garments for the members of the court. However, the grandest of all these would be that of the king.

The chogha is loose and may have a symmetrical opening secured at the front with ghoondis instead of buttons. The ghoondis are fixed in rounded ties. The chogha is worn on special occasions and during festivities and celebrations. It was not usually considered a daily-wear garment.

The Atamsukh as an outer garment extends up to the knees. Its silhouette resembles that of the modern day Anarkali i.e. narrow from the top and flared from the waist onwards. Since the purpose of an atamsukh is to keep the wearer warm, the garment was usually padded with cotton wool. In order to showcase grandeur fit for a king, the outer side of the garment was lined with beautifully embroidered silk brocade. It served a dual purpose of adding to the warmth of the garment as well.

The chogha and atamsukh are often mistaken as two names for the same garment. However, the difference between the two lies in the purpose of the clothing as well as their silhouettes along with other subtle dissimilarities.

The embroidery on the chogha usually showcased episodes of hunting on the outer side. The inner side of the garment showcased woven motifs of animals and birds. Although there are no set motifs that would be embroidered on to the atamsukh, they were usually inspired either by nature or were a specialty of the area where the atamsukh was being stitched. Floral motifs were also very popular on outer garments made of pashmina wool.

Needlework was the preferred form of embroidery on these items, especially with the use of silken and zari threads. Moreover, decorative elements such as badla and sitaare were also used to give the chogha and atamsukh a look of grandeur.

The atamsukh being a warm item of clothing was made of cotton wool along with silk brocade. The chogha on the other hand was made using different materials based on the season as well as the region in which it was worn. For instance, Amritsar in Punjab was at the center of manufacturing specialized woolen choghas for the royalty of Rajasthan. However, choghas made of muslin cloth was worn in the summer season with light embroidery in the pattern of buttis on them.

In the present day and age, the chogha and atamsukh have been adapted in various forms to appease modern style sensibilities. While some designers have adapted the motifs others have taken the silhouette and created modern items of clothing that are suitable for men as well as women. However, the chogha and atamsukh in their original form are no longer in use.

A fine sample of the chogha can be seen on display at the Kashi Hindu University whereas an atamsukh with rich Banaras brocade worn by Rajasthani Maharaja Sawai is exhibited at Mubarak Mahal and City Palace Museum.

Atamsukhs have now been created for women as well that resemble the original silhouette. The fabrics used, however, are lighter and airier. It is worn with a churidar pajama so that the unusual silhouette remains the highlight of the attire.

Chogas have also been reinvented and are now seen as appropriate groom-attire along with churidar pants and designer dupatta. The work on the chogha remains elaborate and heavy as the modern usage of the garment is an occasion as grand as a wedding.

The Chogha was originally worn over the angrakha shirt. Although an outerwear like the atamsukh, it wasn’t meant for a particular season but was rather meant for special occasions. The atamsukh, on the other hand, was meant to be worn during winters.

Since the chogha and atamsukh are not available for purchase in their original forms but have been deemed as precious items to be stored in museums, it can be deduced that extreme care needs to be taken with these items. Since these articles went out of use over a century ago, the fabric is fragile and needs to be handled with care.

Modern day, reinvented choghas and atamsukhs can be either washed or dry cleaned based on the fabric they are made of. Heavily brocaded articles however, should always be dry cleaned.