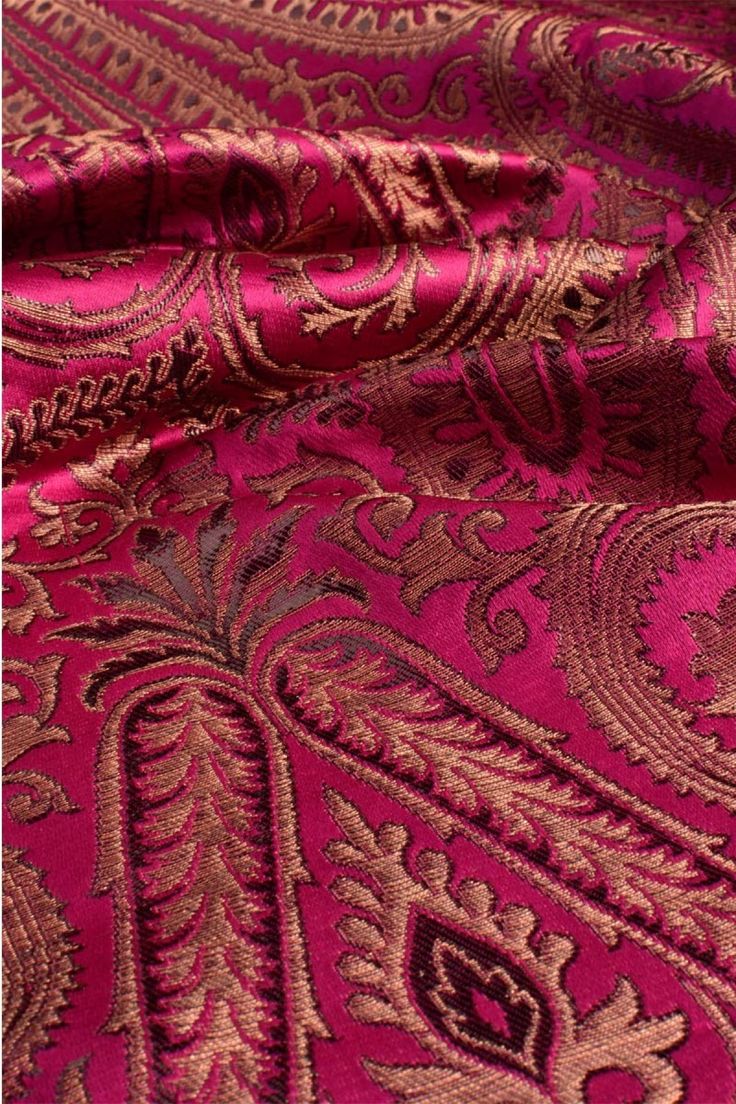 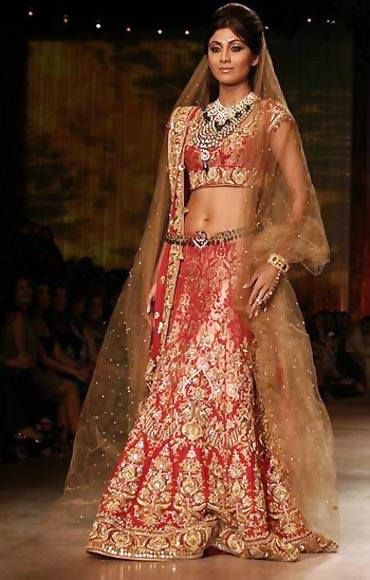 Kinkhwab brocade is essentially a heavy and gilt form of brocade. It is known for having extensive amounts of zari work which makes the underlying silk fabric invisible under the sheer amount of work done on the fabric. The zari work itself makes for more than fifty percent of the entire surface of the fabric. The word ‘kinkhwab’ translates into tiny dreams or little dreams which can be interpreted to mean that Kinkhwab is ‘the fabric of dreams’. The sheer beauty of this fabric has made it popular as bridal wear.

Kinkhwab brocade was widely popular in the Mughal courts and was considered to be one of the few luxury textiles in the realm. When the British came into power, it was not only used to create a variety of garments but was also used to line the capes and collars of ensembles as well as slits in dresses for women, creating an extremely interesting visual appeal.

Over the years, especially after the British Empire’s rise in India, Kinkhwab brocade was widely circulated among the high ranking British families and eventually ended up being filtered back into Indian ethnic fashion all over again.

Kinkhwab brocade is known for its high level of intricacy. While the original brocade fabric that came from China and into Ladakh was filled with Buddhist symbols throughout. On the other hand, the fabric that was adopted into the Indian subcontinent was known to be distinctly different as it had more Islamic influences in terms of the embroidery along with the motifs and patterns. More often than not, these patterns were filled with influences drawn from flora such as flowers, vines, trees, roots and so on and fauna, primarily birds like peacocks and other smaller birds, a feature that is extremely characteristic of all embroidery forms that have an Islamic heritage.

The Making of The Fabric

Kinkhwab brocades are created by using extremely heavy and intricate forms of embroidery that have a large number of wefts and numerous layers of warp threads that add to the elaborate look of the embroidery done on it. It is said that the silk fabric under the embroidery can hardly be seen if the quality of the work is top notch. The weft that is used can either be made of gold, silver or silk threads (or a combination of two or all three). There can even be a total of seven layers of the warp threads. 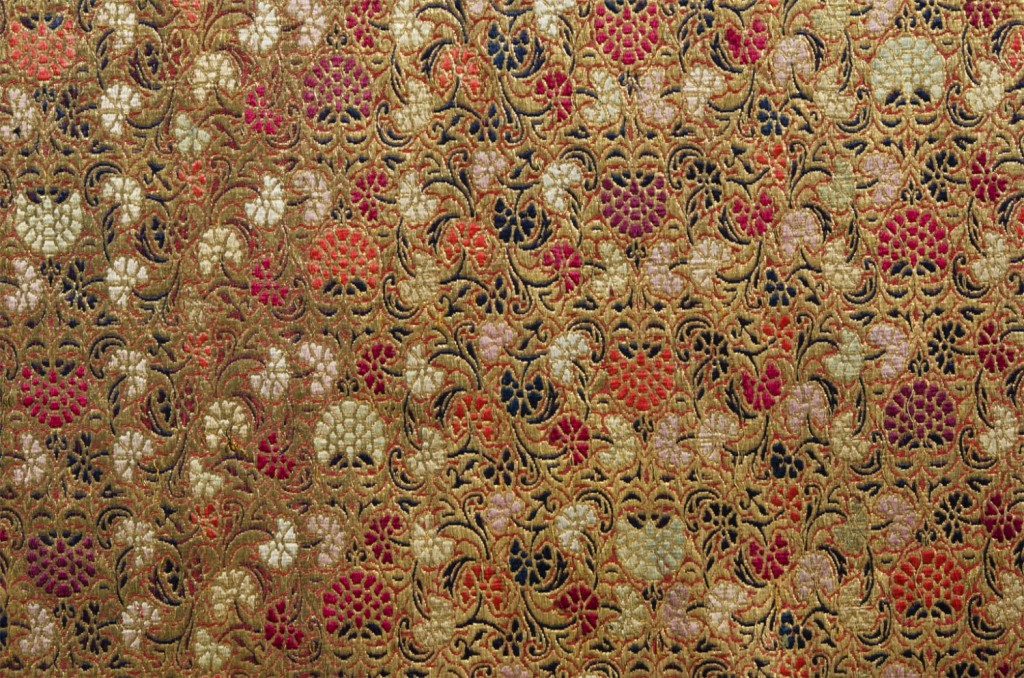 While the trade of brocade played a vital role in the economy of the Indian subcontinent (essentially under the rule of British in the 19th Century), Surat, Banaras and Ahmedabad were the three major capitals in the country known for producing some of the best Kinkhwab brocade work in the nation. 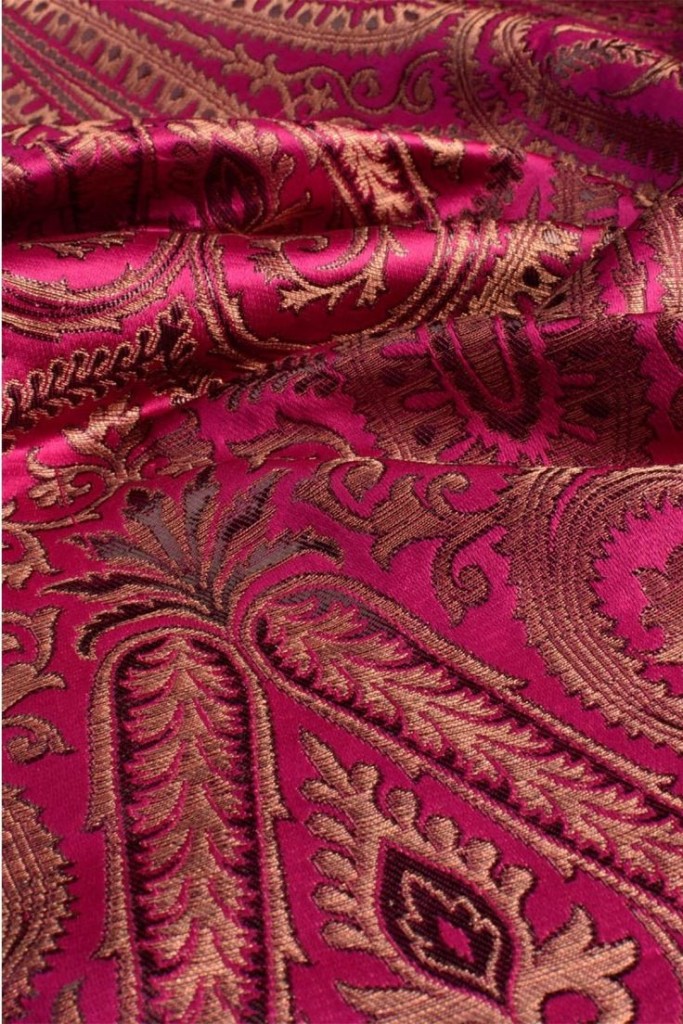 Presently, Banaras is still considered a major hub for producing and selling this form of fabric while both, Surat and Ahmedabad hardly produce this fabric now. In recent times, South India has become a good market for the Kinkhwab brocade.

As the Kinkhwab brocade is considered the ideal fabric for bridal wear, it is usually accompanied by bridal Indian ethnic jewelry to complete the ensemble. Kundan sets, Polki sets and Meenakari sets are the most commonly seen forms of jewelry in the bride’s ensemble. However, western forms of jewelry such as elegant diamond sets and gold sets with emeralds or rubies are also seen these days.

Silk is a tricky fabric to maintain; and when one is talking about brocade, maintaining it well becomes all the more important. Ideally, the fabric or the garment should be wrapped in either a soft muslin cloth or a cotton cloth to protect it. Wet brocade garments should not be dried in sunlight as it may lead to fading.

• Tibetans introduced Chinese brocade to Banaras because they wanted craftsmen to create replicas for them as they found the Chinese versions too expensive.
• When the fabric is created with authentic gold or silver wires, it can be a little stiff because of the stiffness of the metal itself.
• Pot-than is another form of brocade which is lighter than Kinkhwab brocade but equally elaborate.