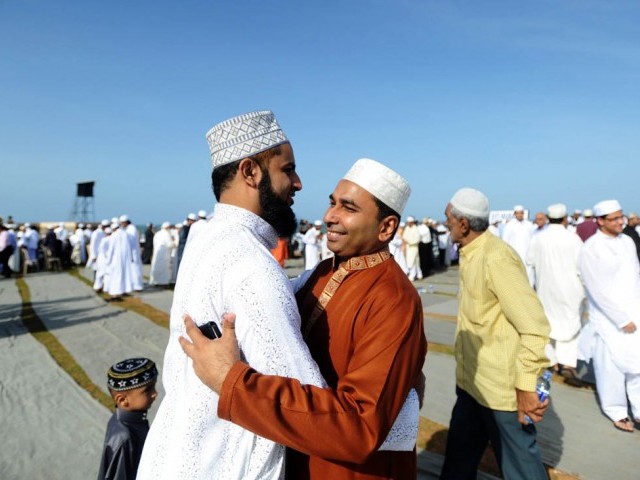 Eid-Ul-Fitr or Eid-al-Fitr is the biggest of the three major Islamic religious festivals around the world. In keeping with the lunar Islamic calendar, Meethi Eid as it is commonly referred to in India, is celebrated on the first of the month of Shawwal, after 30 days of fasting during the month of Ramadan. While South East Asia, the Indian subcontinent and many countries in Africa are at the epicenter of Eid celebrations, the Western world too sees a vast number of large-scale celebrations on the day of Eid. After a month of dawn to dusk fasts by men, women and teenagers, Eid ul Fitr is welcomed as a day of feasting and celebrating with family and friends instead of fasting.

Men Greet Each Other After the Customary Morning Prayers (Image: http://tribune.com.pk)

Eid-ul-Fitr was instituted by Prophet Muhammed, along with the other Eid celebrated by Muslims all over, Eid-al-Adha. Both these days are earmarked as the two days of festivities that believers in Islam from around the world can celebrate with as much fanfare as possible.

After 30 days of fasting, this is the one day where no believer should ever fast. Festivities begin early in the morning with a cleansing ritual followed by a pre-sunrise prayer. Celebrants wear their best clothes, which in most cases are new clothes purchased the previous evening in a celebration known as ‘Chand Raat’.

Celebrations in the Indian Subcontinent

The men are usually dressed in cotton kurta pajamas or sherwani in white or other muted tones, accompanied by a Taqiyah or a Kufi (both of which are varieties of a brimless cap worn by the Muslim men around the world).The women, on the other hand, are dressing in pastel colored cotton salwar kameez, accessorized with elaborate jewelry. In recent times, the trend of wearing cotton ensembles in pastel colors has been replaced by the donning of attires in silk, satin, georgette and chiffon (as well as faux varieties of each). Attires in these materials are generally chosen because they offer greater versatility as opposed to cotton salwar kameez sets. The common

The common thread, however, is the grandeur in each other ensembles. All Eid outfits, especially, are embellished with exquisite thread embroidery such as chikankari or light zari. Recent trends include stonework and patchwork embellishments. Over this attire, women wear abayas, the hijab and the niqab, in accordance with Muslim laws. The most important decorative accessory to the ensemble is the henna artwork on the women’s hands and feet. 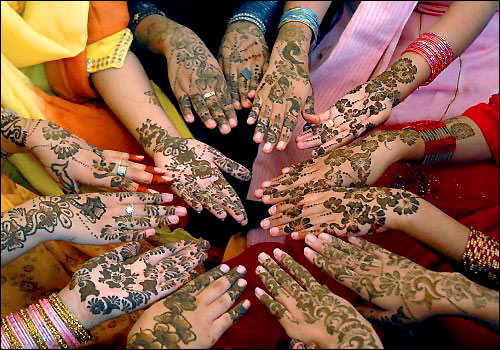 Women Decorate Their Hands in Preparation for Eid (Image: http://www.walkthroughindia.com)

Celebrations around the World

•    Eid in Indonesia: Eid, known as Hari Raya Idul Fitri or Lebaran, is a national holiday in Indonesia. Prior to the day of Lebaran, families visit their elders, distant relatives and even neighbors to ask for forgiveness and reconcile with them. This signifies a fresh start, beginning on the day of Eid. Special savory as well as sweet dishes such as ketupat, opor ayam, rendang, kue and dodol are prepared on this day. The older members of the community give envelopes of money to children.
There is a special type of attire that is worn by the celebrants. The men’s outfit is known as the ‘baju koko’ which comprises of a collarless shirt (which can be either short or long sleeved) embellished with embroidered patterns along with a kilt sarung made of plaid cloth (such as songket, ikat or other similarly woven fabrics). In the recent years however, Indonesian men have also started wearing business suits with Western cuts or loose trousers coupled with a shirt to match.
The traditional outfit of the Muslim-Indonesian women is known as the ‘kebaya kurung’ and comprises of a kebaya blouse (which is loose fitting yet brocaded and heavily embroidered) along with a long skirt i.e. the sarung which can be in ikat, batik or songket. The last element of the ensemble is the hijab or its local variant, the kerudung.

•    Eid Melas in Toronto: Within Canada, Toronto holds the largest number of Eid Melas for the larger community. The common thread to each of these celebrations is the presence of a number of stalls that sell traditional Islamic garments such as the hijab and niqab along with other ethnic garments such as dupattas as well as salwar and churidar kameez. 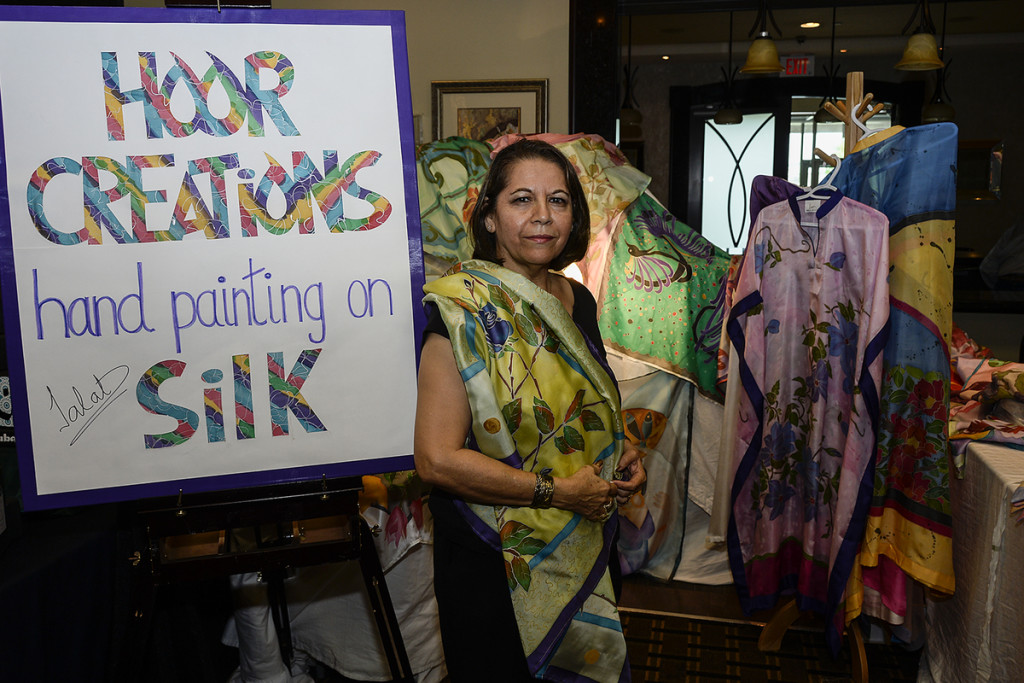 •    Eid in Saudi Arabia: One of the major hubs of Eid celebrations in the world, Dubai alone sees an influx of about 1.5 million tourists each year. As and when the day of Eid approaches, locals and tourists flock to malls and bazaars to buy the latest abayas and other religious garments. Since religious laws for Muslims is more stringent in UAE than many other parts of the world, the outer garments are given more importance than the ensembles worn under them. For this reason, the popularity of designer abayas and traditional men’s headgear is more popular here than anywhere else.

•    Eid in Australia: Eid celebrations in Australia are as much for Muslim believers as it is for people from other cultural and religious beliefs. A Multicultural Eid Fair and Festival is organized every year in Sydney by the MEFF Consortium of Australia. The other major celebration takes place in Canberra where the Australian Federal Police organizes an Eid Fair on the Sunday following the day of Eid-al-Fitr. Large crowds gather to enjoy a cultural program which includes a number of stalls displaying clothing as well as other memorabilia from countries around the world. Food stalls as well as adventure rides, make the event fun for people of all ages.