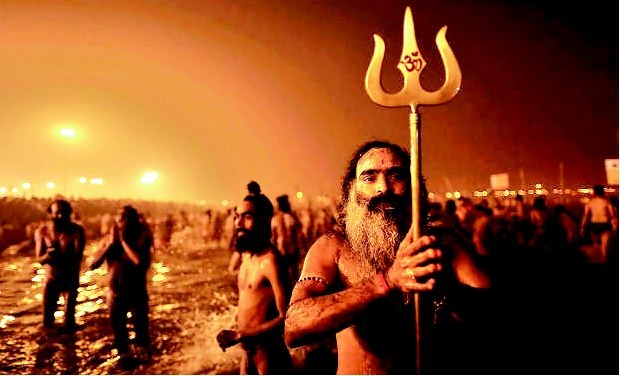 Kumbh Mela is one of the most important cultural festivals in India. It is a pilgrimage for the Hindus, where the people of this faith come together to bathe in a sacred river. The festival destinations are rotated amongst Allahabad, Haridwar, Ujjain, and Nasik, all of which have a special significance in the Hindu faith.

Considered to be the largest religious congregation in the world, a large number of people gather at these four places to take a dip in the holy rivers which include the Ganges in Haridwar, the Shipra in Ujjain, the Godawari in Nasik and the confluence of the Ganges, Yamuna and Saraswati in Allahabad which is also called ‘Sangam’.

The Kumbh Mela has been around for many centuries. According to Hindu mythology, the origin of this festival lies in the Samudra Manthan incident. This episode involved the demigods and demons coming together to churn the primeval ocean of milk, Ksheera Sagara, in order to receive the nectar of immortality. Once the nectar was received, a fight for the ownership of the pot of nectar started between the two sides and is believed to have gone on for 12 years. To end the dispute, Lord Vishnu, incarnated as Mohini-Murti, flew away with the pot (or Kumbh) of the nectar of immortality and in the process spilled a few drops of it in Allahabad, Ujain, Haridwar and Nasik. According to popular belief, Kumbh Mela has been held in these four destinations ever since.

The Kumbh Mela, being one of the largest and most popular religious gatherings in the world, witnesses people participating in the tradition of the holy dip. Visitors to this festival are required to dress in traditional Indian clothes. The women are seen in sarees or salwar kameez and the most popular attire for the men is the kurta pajama or dhoti kurta. Modern day attires such as jeans, trousers, shorts, t-shirts and others are strictly prohibited at the festival.

The colors associated with the dresses worn when visiting the Kumbh Mela generally include saffron, red and white. Along with these, muted tones of other colors such as green, blue and pink can also be seen. However, dark colors like black and dark shades of blue are prohibited as these colors are associated with evil forces according to Hindu beliefs. Cotton and khadi are the two most commonly worn fabrics at this festival. In some cases garments made of silk, georgette and nylon are also worn by visitors. Kumbh Mela sees Pilgrims from Across the Globe (Image: http://www.hindustantimes.com)

Along with being an important religious festival, the Kumbh Mela is also known for being a source of inspiration for various trends and styles. The use of Rudraksh beads for necklaces and braiding of hair are among styles made popular through this festival. Dreadlocks, which are commonly seen amongst the sadhus (sages), are another styling component that has caught on in the world of fashion. Another popular accessory that can be seen at the Kumbh Mela is the adornment of the Marigold flower, which is used in garlands, in the hair or around the wrist.

Several designers have presented collections based on the religious theme of the festival. With shades of orange and red used predominantly in these collections, modern designs and motifs have been combined with the cultural influence of the Kumbh Mela. A majority of the dresses are styled as drapes along with kurtas, dhotis and jackets as well. Each of these dresses uses traditional Indian artwork, thus providing a distinctive look. 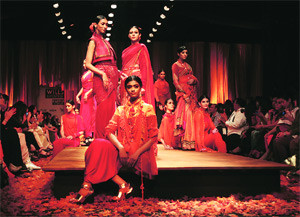 Women’s clothing inspired by the Kumbh Mela (as seen on the runway) uses certain characteristic features of the festival itself in certain garments such as the conservative-ness of women’s attires in some and the vibrancy of the colors in others along with the styling of flowers in the hair. Many more of these elements have been cleverly used to depict the Kumbh Mela on the ramp.

Being one of the most religiously significant communal festivals of India, Kumbh Mela has always attracted visitors from across the world. Several tourists from different countries visit this grand festival to experience Indian culture and tradition first hand. A host of religious ceremonies and rituals along with lectures and discussions about various religious topics capture the interests of the tourists. The Kumbh Mela has been covered by several international networks like CBS, BBC, National Geographic Channel and Sky One.