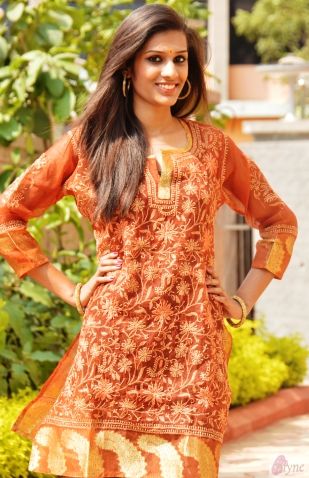 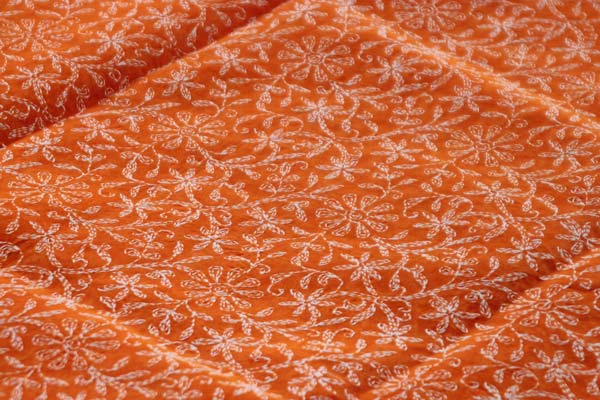 Tepchi stitch is also known as Taipchi or Tipkhi stitch and is a specific type of stitching work that is used in chikankari embroidery (also known as chikan work). This is mainly an extremely simplistic darning stitch. In this style, the thread is woven along the grain of the fabric in single rows at a time. In terms of skill, the most basic of sewing skills are required to create this style of the stitch which is why it is referred to as a more inferior form of chikankari than all the other stitches that are used to create the embroidery.

Running and darning stitches have been a part of needlework’s heritage for a long time. Since it is the most basic of stitches, this is one of the first skills learned by any woman. In India, embroidery by hand was done for many years before the introduction of machines. Nevertheless, the Tepchi stitch remains one that is done by hand as it is part of a larger Chikankari garment; with this style of embroidery being done only by hand.

Chikankari is one of the most famous styles of embroidery in India and it is said that Lucknow is the point of origin of this particular embroidery. Some historians claim that this embroidery was introduced to India by Nur Jahan, the wife of Emperor Shah Jahan. This argument is supported by the fact that the word ‘chikankari’ comes from the Persian word Chakin (also written as Chakeen), which mainly means cloth that has intricate and exquisite needlework on it. On the other hand, many other historians claim that the craftsmen in Lucknow were especially inspired by the intricacy of the Mughal architecture and the designs they saw on the walls and pillars. Thus, chikankari was born as an effort to emulate these designs on cloth.

Regardless of the sources of origin, there is no dispute over the fact that this style of embroidery originated in Lucknow itself. Lucknow is, thus, considered a capital in India for chikankari work.

This style of embroidery is widely influenced by Mughal aesthetics and, by extension, Persian elements. Therefore, the patterns and motifs that are created on a garment while creating chikan work usually revolve around nature. Thus, this embroidery has an abundance of floral motifs as well as those pertaining to the animal kingdom and bird kingdom.

When using the Tepchi or the Tipkhi stitch, similar motifs and patterns are used. This stitch is used to create outlines as well as to fill in leaves and petals between two parallel lines in a pattern. This stitch is also used to make bel butti (that is, a creeping vine) all over the fabric.

The Use of this Stitch

Tepchi is essentially created on the right side of the fabric and this is a running stitch. This stitch is used to create short lines spaced at regular intervals. This is the most basic form of embroidery and is usually worked on to create more elaborate and intricate patterns. The needle is positioned in different directions at different spaces to create the kinds of patterns and motifs that are desired. While this is a process that is done entirely by hand, there are various machines that are now available in the market that can replicate these embroideries on the fabrics quite easily. 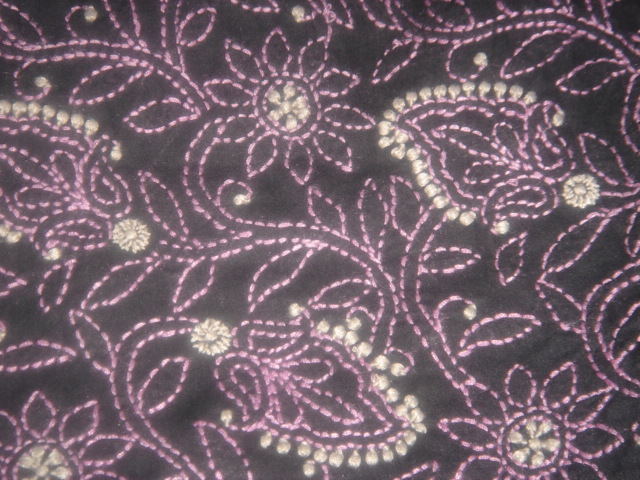 Even though this style of stitching is considered to be inferior, it is an extremely important type of stitch because it provides the main base and support that is needed to create more elaborate stitches. Some of the stitches that are more elaborate variations of the Tepchi stitch are as follows:

Pechni: The Pechni stitch is one of the easiest variations of the Tepchi. To create this, the Tepchi is covered by entangling the thread that is used over it. This creates the kind of effect that is similar to a lever spring.

Pashni: To create this style of stitch, the Tepchi is first created in order to make the outlines for a motif. This motif is then covered by extremely small vertical stitches made of satin that are created over the span of two threads. This is then used in badla as the inner finish.

Jangira: This style of stitch is a chain stitch which uses Tepchi or even Pechni to create outlines.

Murri: The Murri stitch is usually formed over the outlines created by the Tepchi stitch.

Tepchi stitch and, by extension, chikankari work can be created on a variety of garments. Most popularly, this work is created on salwar kameez sets, lehenga choli sets and sarees.

The capital in India for exquisite chikankari work is Lucknow. When it comes to creating this embroidery as well as creating the overall garment that is required, there are more than 5000 families in total that work together within this flourishing industry.

One of the most important innovations that led to changing the way chikankari is created and viewed by its audience is the fact that originally, this work was only done with white thread. Now, however, there are different colors that are used to create the garments and the embroideries. This embroidery is also created on casual attire as well.

Chikankari is not just restricted to garments. It is seen on home décor items as well such as curtains, cushions, bedspreads, bed sheets, upholstery for the living room, lamp shades and many more items.