Puppetry is one of the oldest forms of entertainment in India. There are many different forms of puppetry in the country and each region has it’s own style in terms of movement, costumes and musical accompaniments. 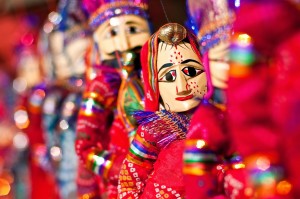 Puppetry in India dates back to 2500 BC, which was the dawn of civilization in the region. Archaeological excavations have unearthed a wide variety of relics such as a bull made of terracotta that had a detachable head that could be manipulated by string.

There are also references to it in the Hindu epic, the Mabharata. When Uttara, the princess and her friends urged Arjuna to bring back fine garment for their dolls, the allusion was to their puppets. However, the best reference to puppetry can be found in the Bhagvad Gita which is the holy book of the Hindus. It says that all men have three qualities in them i.e. the Sattah, the Rajah and the Tamah and that these are the three strings that are pulled by the divine to lead mankind in life.

There are also Ashokan rock edicts from the 3rd century BC which alluded to Jambudweep, the ancient name of India, as a theater for puppetry.

There are 4 different styles of puppets that are used in puppetry, namely glove, rod, shadow and string. Their name alludes to the way that they are manipulated. In India, all four styles can be found.

As the name suggests, glove puppets are worn on the hands just like a glove. Usually, the middle-finger and the thumb act as the hands of the puppet while the index finger acts as the head. Since it only requires one hand, one puppeteer can simultaneously perform with two puppets.

Glove puppets in Kerala are called Pava-kathakali. The puppets that are used in this form are very colorful and resemble a Kathakali performer including the costume as well as the makeup. The height of the puppet varies from one to two feet. The puppets are painted to resemble their real life counterparts and wear jewellery made of a variety of materials such as tin, carapaces of large bees, transparent coral and stem of peacocks. The theme of the play is usually based on the Mahabharata or the Ramayana.

Another form of glove puppetry in India is the Kundheinach of Orissa that depicts the story of Krishna, Radha and the milkmaids. These puppets are made of three wooden pieces that consist of the head and two hands with holes that are used to insert the fingers which are then joined together in long flamboyantly dressed costumes. Faces of the puppets are carved in such a way that they show definite expressions to depict emotion. The puppet of Radha is made to look different from the others as the puppet wears a cummerbund made of semi-precious metals around her waist which is called Chandra Badani. The other hand of the puppeteer plays the Dholak (an Indian percussion instrument). The dialogues, the puppet as well as the beat are all in sync, to create a very dramatic atmosphere.

Rod puppets are manipulated by rods as the name suggests, and usually have 3 main joints. Due to their design, rod puppets usually do not have legs and hence the movements made by them are quite dramatic. The themes of the performances are usually based on the Ramayana and the Satee Behula.

The Kathi Kandhe is a form a rod puppetry in Orissa. The size of the puppets is usually between twelve to eighteen inches and the themes showcased, are based on a wide range of subjects ranging from mythology, fantasy and social themes.

The rod puppet of West Bengal is made of wood and clay. The body is painted on the wooden structure, but they give a clay-and-cloth layer on the face and paint on it. Drawings are strongly related to the style of pat or cloth painting, using primary colors. They use oil colors and varnish. Puppets have holes in both their hands to insert bow, arrow, etc., in the hole. For a single puppet-body there are several heads, so that replacing only the head and costumes can change the character of the puppet.

In West Bengal there is a form of rod puppetry known as Putul Natch which means ‘dancing dolls’. The puppeteers perform from behind a curtain set at head height and move and dance with the puppets. The puppets themselves are between one and a half to two and a half meters in length. The performers squat behind a screen and the dialogue is usually sung instead of spoken. The body is usually painted on wood but the face has a clay-and-cloth layer which is then painted on. The paintings have a style reminiscent of patachitra due to the extensive use of oil colours. The colours, make up as well as jewellery is very similar to the Jatra theater that is common in the region.

The Yampuri is a form of puppetry found in the state of Bihar. The puppets that are used are made from wood and are entirely in one single piece and have no joints. Due to this, the manipulation of the puppets is different from other forms of rod puppets and requires greater skill.

The puppets that are used in shadow puppetry are flat and are performed against a white cloth screen that is tightly stretched. Shadow puppets are made of leather which is specially treated to make it translucent. This puppetry is performed by pressing the puppets against the screen and placing a strong light source behind the screen. For the audience sitting in front, it creates colorful shadows or silhouettes. Puppets are usually perforated and either split bamboo or cane sticks are vertically attached for manipulation and for handling.

Andhra Pradesh’s Tholu Bomalata has one of the richest traditions of shadow puppetry. The puppets are made using goat skin and are brightly colored. These puppets are about five to six feet in height and generally have joints at the shoulders, elbows and knees although they can also have joints at the waist, the neck and the ankles. The puppets are colored on both sides using vegetable dyes. The music that is played is usually based in the classical music of the region and the themes of the plays are usually taken from the Ramayana, the Mahabharata and the Puranas.

Togalu Gombe-atta is the name of the shadow puppetry in Karnataka. The puppets are generally smaller in size but the puppets themselves differ in size based on the social status of the characters that they are conveying. The costumes of the puppets generally date back to the Mughal era. The character of Rama is quite unique and wears an upper garment and a stripped lower piece as well as a crown on his head.

In the Ratnagiri area of Maharashtra, Chamadyache Bahulya is performed. The puppets in this art form have no limbs and are gently dyed with vegetable dyes. They use a Paithani style of decoration and the male puppets have mustaches and beards with their costumes like the Mughals.

The Ravanchhaya performance in Orissa is considered to be one of the most exciting forms of shadow puppetry in India. The puppets that are used are generally two feet in size and have no jointed limbs. The deer skin puppets are instead conceived in dramatic poses. They aren’t colored and throw opaque shadows. Aside from the characters and animals, trees, mountains and chariots are also shown during a performance.

The shadow puppets in Tamil Nadu are called Thol Bommalattam which literally means shadow puppets and the puppets are made of goat skin and have no perforations. The styles used in this form of puppetry are quite similar to the one performed in Andhra Pradesh.

The tradition of marionettes or string puppets in India is ancient. String puppets are quite versatile and can be made using wood, wire or even cloth that is stuffed with cotton, rags or saw dust. The puppet is suspended from control strings that are attached to different parts of the puppeteer’s body. Since the joints are controlled by strings, they have much greater flexibility than others and are hence, more articulate. Control is achieved by either loosening or pulling the corresponding strings.

String puppet shows in Assam are called Putul-natch. In this, the body and the hands of the puppets are made of softwood and the puppets range in size from one and a half to two and a half feet. Puppets that depict hums have joints for manipulation and since they use long flowing cloth to over the bottom, there is no need for legs.While the costume of the puppets may vary, the face paint remains the same. Heroes such as Rama and Krishna are painted blue while their consorts are painted light yellow or pink. Evil characters such as demons are painted deep green or blue.

Gombeyatta are string puppets from Karnakata and are designed to look like characters of the Yakshajana, which is the traditional theater form of the region and have elaborate headgear, colorful makeup and heavy jewellery as well as the costumes associated with Yakshajana. The theme of the performance is based on the epics and the Puranas and the music that accompanies them is quite dramatic and has a combination of folk and classical elements.

The Kalasutri Bahulya from Maharashtra has small puppets without legs and have just two joined at the shoulders. The puppets are manipulated using strings that are attached to the head and the hands of the puppet. The performance usually plays out episodes from the Ramayana or the other epics.

The string puppets in Orissa are called Gopalila Kundhei. These puppets are wooden half dolls and have detachable arms. Since the puppets have no legs, they wear long flowing skirts. The costumes worn by the puppet are based on the actors of Jatra, which is the tradition performance art of the region. The music is heavily influenced by the music of the Odissi dance.

Kathputli is the traditional form of puppetry in Rajasthan. The puppets are carved from a single piece of wood and resemble large dolls that are colorfully dressed and the strings are attached to the head for manipulation. The faces of the puppets are painted yellow, white or any other bright color. The puppets have no legs and wear long trailing skits while the body is made from stuffed rags, cotton or bits of cloth. Unlike other string puppets in India, then hands of the puppets do not have any joints. The puppets can have anywhere from two to five strings for manipulation and those strings are tied to their fingers and not to any kind of prop. The puppets generally wear traditional clothes from Rajasthan such as angrakhas for the males and ghagra cholis for the women but may differ depending of the type of play that is being performed.

In Tamil Nadu, the Bommalattam combines the techniques of rod and string puppetry together. These puppets are some of the largest, heaviest and the most articulate of all traditional Indian puppets.They are usually four to four and a half feet in height and could weigh eight to ten kilos. There are joints at the shoulders, hips, knees, ankles and wrists which give it excellent flexibility. They are made from wood and the strings are tied to an iron ring which the puppeteer wears on his or her head.