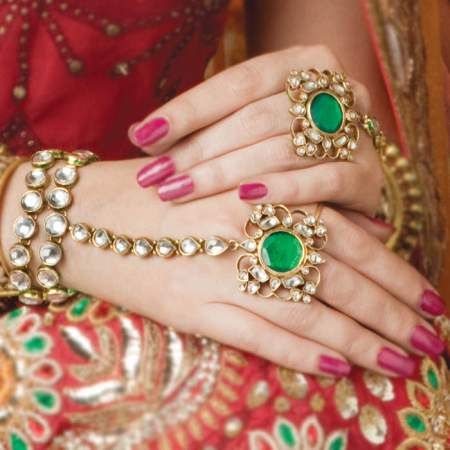 The Hand Bracelet or Haath Phool is known by many names; i.e. Haath Kamal, Hand Chain, Hath Panja and at times as the Slave Bracelet too. The history of this Indian ornament is vast and rich. While haath phool literally translates to ‘hand flower’, kamal is the Hindi word for the Lotus flower, and both terms refer to the same ornament. Although it is popular as a bridal accessory, especially in North India and Pakistan, the haath phool has become a party-wear ornament that is now worn by women from across the world. It no longer has an exclusively Indian identity. 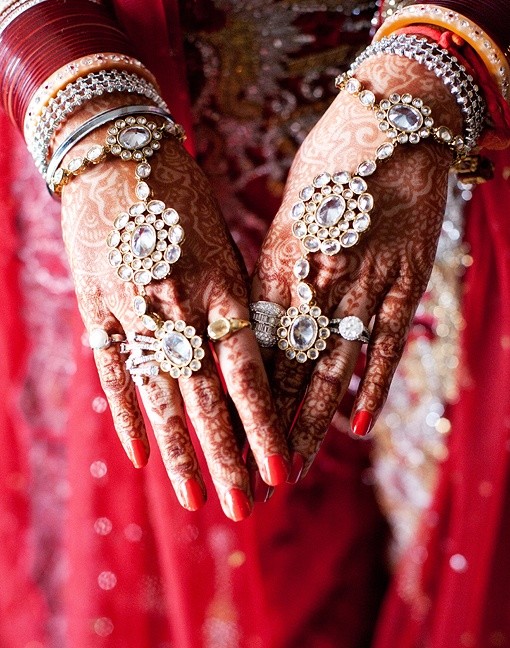 The haath phool is said to have originated in Persia and brought to India during the Mughal invasion. It was a regal and royal piece of jewelry that was worn by the queens and princesses of the time. However, it was the Mughal courtesans who truly popularized the ornament. Over time, Persian culture spread to all kingdoms that are today considered a part of the Indian sub-continent. Moreover, it merged with Indian culture in its medieval avatar. The haath phool made its way into the Rajput culture and when it was worn by Rajput royalty and nobility it reflected hints of their culture (in terms of the materials used or in the way it was crafted). Another prime example of this Persian ornament taking on Indian flavors can be seen in the Nawabi culture. Pearls were used for the first time in the haath phool when it was taken up by the Nawabs.

Over the ages, however, the regal connection of the haath phool faded (especially after the solidification of India as a British colony). The haath phool then became an accessory worn by the banjara (nomadic) and tribal communities of Rajasthan and Gujarat. The aesthetics, therefore, saw a dramatic change. While the royal haath kamal was made using precious metals and precious stones, the tribal varieties were made using cheaper metals and alloys, with beads replacing precious stones.

Certain accounts refer to the haath phool as slave bracelets. However, many disagree with this. One of the most prominent designs of the haath phool was one where a snug bracelet had four chains extending to each finger and ending in a ring; while many took this to signify bondage, others believe that the pattern is only meant to enhance the delicateness of the female hand.

The haath phool was greatly influenced by Persian culture, as mentioned before. The motifs featured in royal haath kamals were based on nature, with 12-point flowers being the most popular of them all. Mughal architecture, or in fact Persian aesthetic sensibilities in terms of favoring jaali work was seen in crafts such as chikankari as well as ornaments like the hand bracelet.

The highlight of sporting a jeweled ornaments like the haath phool is the variety and styles that it is available in.

The bridal haath kamal is an elaborately designed piece that is not usually available as part of bridal jewelry sets. One has to purchase it separately and is quite highly valued. Since Kundan is the most popular of all bridal jewelry, hand bracelets in Kundan can also be easily found. Of late, many other ornate styles such as Polki have also been integrated into the creation of hand bracelets. While traditional jewelry styles are more prominent in traditional weddings, many Indian brides (irrespective of whether they’re living in India or a Western country) also opt for modern, daintier designs such as those with simply embellished golden chains ending in diamond or platinum rings.

The haath kamal is as much a part of tribal culture as it is of India’s wedding culture. Tribal haath kamals are made from cheaper materials and feature simple geometric motifs. For instance, circular and rhomboid coins are very common in tribal jewelry in general, and the haath phool is no exception to this trend.

The haath phool as a trend vanished from the fashion industry quite a few decades ago. It has only resurfaced over the last couple of years. This time ‘round it has taken on a more global flavor and the aesthetics incorporated into it appeal to modern women aged over 20. The chains are more delicate and subtle, the stones and metals that are used are more budget-friendly and the purpose of the ornament is to add glamour to a day-to-night look. However, more elaborate versions are also very popular with women and are generally worn as accessories to wedding-wear or party-wear outfits. Faux materials are often used in the creation of party-wear haath phool, to make it more accessible to a wider demographic. The price often depends on the elaborateness of the ornament. 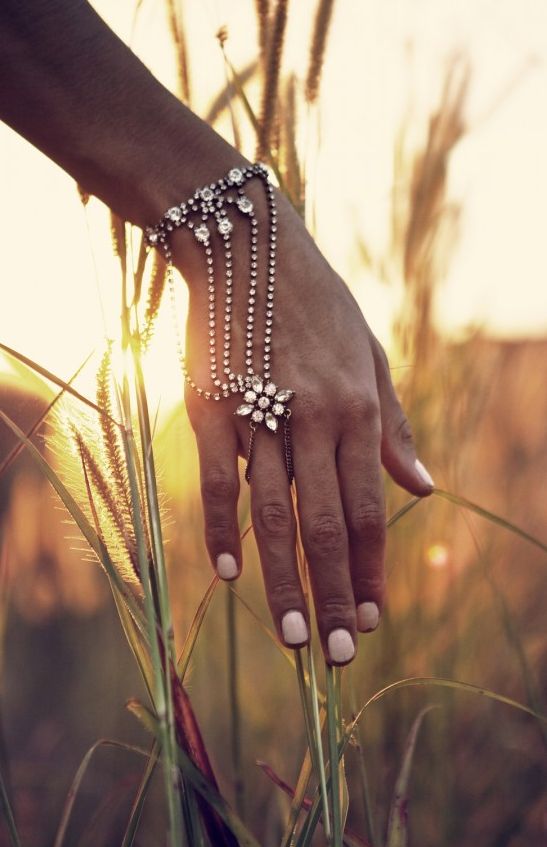 As has been noted time and time again, the haath phool or haath kamal has become an ornament that has gone from being exclusively Indian to a global phenomenon. The Indian cinematic landscape is generously sprinkled with period films as well as modern, youthful films, that feature women sporting Indian-style hand bracelets. Hollywood has also seen its fair share of ethnic influence, in that Indian ornaments have been used to accessorize Western garments. In fact, Vogue declared 2015 as the year the haath phool would become a rage at the Oscars, the most high-profile celebrity event in Hollywood.

Depending on the substances that have been used to create the haath phool, maintenance techniques can differ. However, common advice includes keeping jewelry in a cool and dry place, away from moisture that can corrode the metal base.