Desert Festival- The Pride of Rajasthan

The Desert Festival is indigenous to the state of Rajasthan in India and is organized in the Thar Desert around Jaisalmer. This is an annual festival that is held in the month of either January or February. A variety of fascinating events are conducted over a period of three days, with the festival culminating on the day of poornima or full moon. Renowned in the country as one of its more colorful and vibrant festivals, it sees huge participation from the locals, Indians from other states as well as foreign visitors. Women and men are dressed in traditional, colorful Rajasthani traditional dresses, complete with accessories to match.

The tourism wing of the Government of Rajasthan organizes this fair every year to take the culture and traditions of this state to visitors. Foreign tourists especially flock to the state to witness the magnificent sights of the Desert Festival. Besides attractions and peculiar customs such as camel dancing and comparing mustache-length competitions, the Festival has beautiful traditional costumes in rich warm colors to please the eye. With folk dances and musicians wearing their customary dresses i.e. the ghaghra choli for the women and to the pagris (turbans), everything about the festival is in abundance of vibrant colors. The vivid pinks, reds and greens, as well as black contrast with the yellow of the sand and, are a reflection of the rich culture of the state.

Traditional Costumes at the Desert Festivals

The women wear traditionally designed long skirts with a top that can be short or long and styled like either a kurta or a saree blouse based on the length. The jewelry worn by the women is heavy silver along with several bangles worn on the arm rather than the wrist. Adornments in the form of tilak and bindis even on their chins, are common for women. Some women also wear sarees in similar rich hues. The men on the other hand, wear kurtas of different lengths in different silhouettes. These are coupled either with fitted bottom wear or loosely draped cloth known as the dhoti. The men also wear turbans to complete their attire.

The performers in the Festival wear a variety of traditional dresses depending on what their role in the  festival is. By and large however, the women can be seen in lehengas (ankle-length flowing skirt) or ghaghras (calf-length flowing skirt) combined with either a Kanchli or Choli depending on the length of the blouse. The ghaghra is kept shorter in length on purpose so that the foot accessories are clearly visible. These skirts are vibrant in color and are most commonly seen in red or orange. The folk dance performers especially wear black outfits that are heavily embroidered in vibrant colors. The accompanying silver jewelry is bulky and heavy and is worn on the neck.

Silver jewelry known as the nath is also worn that is essentially an elaborate nose ring whose other end is pinned to the hair. Another neckpiece that is commonly worn is the aarh which is a bulky silver pendant attached to the ropes on either side. The odhni worn by women primarily has tie and dye designs and is draped around the head. It is embellished with tassels of beads and shells. The women complete their Desert Festival look with accessories on their necks feet and wrists. Silver anklets for the legs and white ivory bangles for the arms known as churas or churlas are worn by the women. For the effect of grandeur, these churas can also be in silver, and are worn specially for dance performances. Glass bangles as well as bangles made of lac can also be worn. Various forms of bindis (ranging from elongated motifs to small dots) are used to deck-up the face i.e. on the forehead, over the eyes and just above the chin. 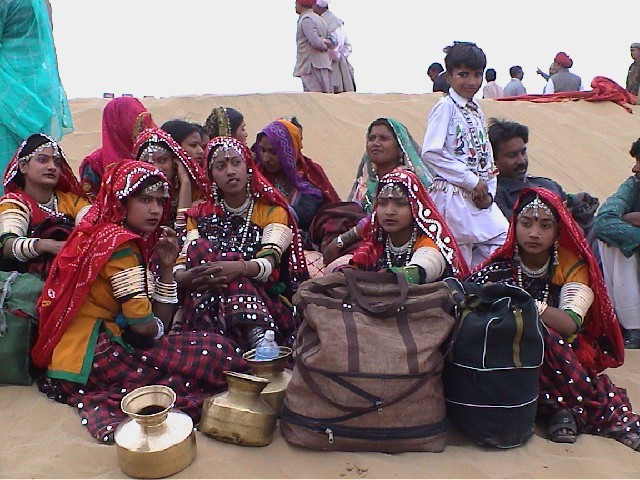 The men wear kurtas in hues of red, white and orange that are long sleeved and fitted till the waist and made snug with use of a kamarbandh or patka i.e. a waistband. From there on the kurtas are take on the silhouette of an empire waist garment. The bottom wear that is commonly worn by the local crowd are either churidar pants (fitted pajamas that have many pleats at the waist). The shorter jackets worn by men, known as angrakhi or jhari, are coupled with the dhoti (a long span of cloth that is draped over the lower half of the body which forms loose breeches around the leg). The turban is a common feature and this men’s head-wear and can be typified as Pencha, Saafa, Potia, Sela and Pagri. The most common of these is the pagri. The headgear and its tying is influenced heavily by the region as well as socio-economic status, but with the overarching purpose of protecting the wearer from harsh weather conditions.