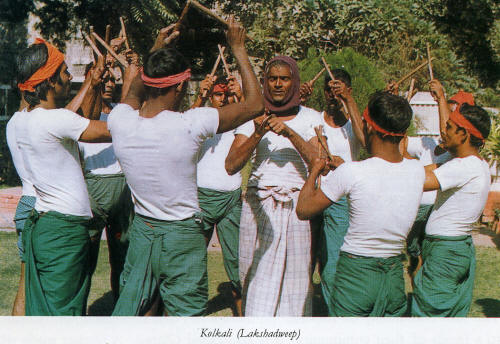 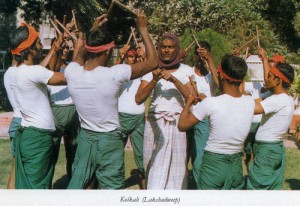 Lakshwadeep is one of the two archipelagos in the Indian Territory and lies in the Arabian Sea on the western coast of India. The costumes worn in Lakshwadeep are similar in style to that seen in the southern states of India. The fabrics too are a typically ones that would be expected in the mainland. The embellishments on the garments are unique to this region and have seen no influence from the southern states. There are certain similarities as well as differences in the traditional garments worn by men and women.

It is believed that the current population of Lakshadweep is descended from those that migrated here from the earliest kingdoms in the Gondwana region, and has very few aboriginal tribes. There is archaeological evidence to support the fact that people from the Chera and Chola kingdoms migrated to these islands and settled here. The archipelago has also seen an inhabitation of the Portuguese as well as Muslims in its rich history. Therefore, the customs, traditions, and costumes worn by the people of Lakshadweep is an amalgam of many different cultures that have come together to form their own unique blend.

In the modern day, there are many important centers within the archipelago. However, there are two that stand out in terms of costumes and clothing styles; Minicoy and the Amini group of islands. Each has their own distinctive style of dressing.

The traditional costumes of Lakshadweep for men are strongly influenced by not only the Union Territory’s neighbors in South India but also the weather and climatic conditions of the area. The fabrics that are used and the daily wear garbs have been adapted to suit the all-year-round humid weather. Since most communities are engaged in physically strenuous professions, their garbs are made as such to keep them comfortable.

The women on the other hand have no such traceable influences on their traditional dress. Although, slight influences of the Islamic culture can be seen in the headdresses worn by them.

The people of the island of Minicoy are known as the children of the sea and therefore, their clothes showcase a lot of cool colors like blue and green.

The clothing styles and costumes of Lakshadweep can be categorized based on sex and on the basis of geographical location. Except for the island of Minicoy, all other islanders dress simply.

The men usually wear a lungi that can either be white or colored. A lungi is essentially a rectangular piece of cloth that is stitched together at the ends. They also wear a silver or golden thread around their waists in which they can tuck in the lower edges of the lungi. This however, is often seen in the elderly men. Because of the muckiness of the weather and the heat, the men do not wear a shirt or any other upper garment to cover their torso. The lungis too are made of light cotton that will keep them cool.

In urban centers and among the younger generation, wearing a shirt over the lungi is preferred. Urban areas take it a step further and wear western daily wear such as shirts and trousers, as opposed to the lungi.

Special occasions too warrant that even the most traditional men wear the finest silk or cotton upper garments they own. Not only are these garments made of fine weaves but are also brightly embroidered.

The Kachi is a traditional garment worn by the women in Lakshadweep. It is similar to the lungi in that it is a rectangular piece of cloth; however, it is unstitched along the edges. The women too wear a thread around the waist that can either be in silver or in gold, wherein the top edge of the kachi is tucked in and secured. The general color scheme of the daily wear kachis is either black or white with black borders.

Silk kachis are worn by the women on special occasions like weddings and most of them are red with black borders, as is customary.

The top wear of them women consists of a long sleeved, snug-fitting jacket. The front of the jacket is vibrant and embroidered with laces studded with mirror or glass and gilt.

This traditional ensemble also includes a headdress known as the thattam which is basically a long scarf that covers the head and the shoulders.

Minicoy is known to have a classist structure of society that determines the dresses they wear. Although over, their style of dressing can be classified as being a lot more elaborate and fancier than that which is seen in other parts of Lakshwadeep.

There are other special elements in the dresses of these three classes, however. A white cloth is worn as a kamarbandh over the trousers along with a headdress made of red or black cloth with stripes. The number of upwards projections in the headdress, that is usually either two or four, indicates the class the wearer belongs to.

A majority of Lakshadweep women can be seen wearing (and owning multiple sets of) the gold or silver kamarbandh known as the Arachan, the bangle-like Vala, Kodakams that resemble bracelets, Koodu and Alikkath that are forms of earrings and finally the Urukku that is a black colored bead necklace interlinked with gold. The arachan is also of two types; the Kannadi and the Adippu and is considered the most important of all ornaments for women.

In Minicoy, the jewelry is indicative of the woman’s class and besides the Manikfans woman, none other is allowed to wear gold jewelry. Women from the other three classes use silver ornaments. All women wear a finger ring known as the Modram, in their respective metals, besides which they only adorn their ears and necks.

Not many changes have been seen in the clothing styles of Lakshadweep except for the island of Minicoy. The younger generations prefer to wear western outfits like shirts and t-shirts along with trousers or jeans. Anthropologists have in fact recorded, that the men in Minicoy seem as modernly dressed as the men on India’s mainland.