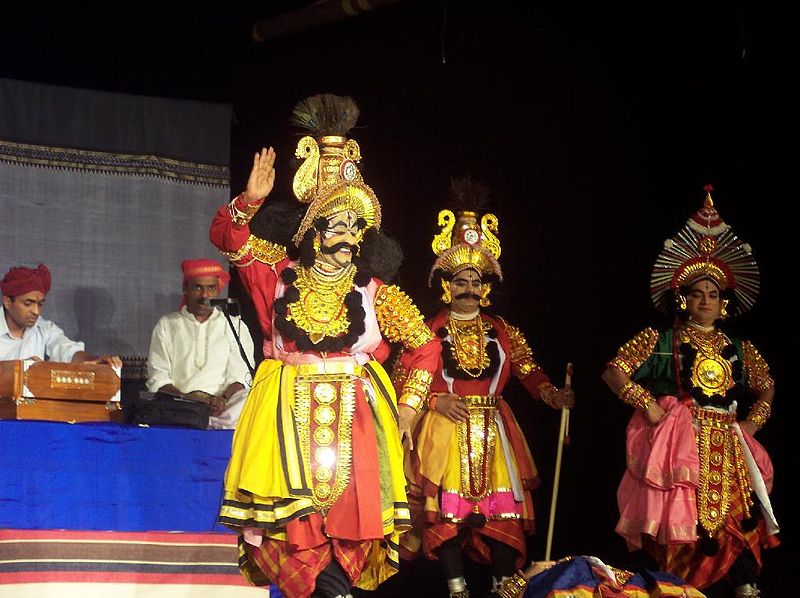 Yakshajana is a theatre form that is most common along the coast as well as in the Malenadur region of Karnataka. The term Yakshajana is a combination of yaksha, who are nature spirits, with jana or gana which means song. Like most theatre forms found in South India, Yakshajana combines dance, music, dialogue, costume, make up as well as stage techniques and as such it closely resembles western opera. In Karnataka, it sometimes simply referred to as ‘the play’. 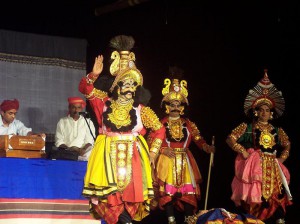 One of the earliest known evidence of theater in the region dates back to 1556 CE and can be found in the Lakshminarayana Temple in Kurugodu in the form of an inscription. The inscription talks about land that was donated to the performers so that the people would be able to enjoy watching it at the temple. It originated as a way to entertain people in villages and cities while at the same time, informing them about the epics.  Many experts do agree that Yakshajana originated sometime between the 11th and the 16th century and the current form of Yakshajana is believed to be strongly influenced by the Vaishnava Bhakti movement during the medieval period.

The themes present in Yakshajana are generally taken from the epics such as the Ramayana and the Mahabharata or the Puras which are ancient Hindu texts. When performing Yakshajana, the actors are generally wearing large headgear with intricate facial make up as well as colourful costumes with elaborate ornaments which help give a superhuman appearance to the characters that are being presented. The current form of Yakshajana has been inspired by many different art forms such as ritual theater, temple arts, royal theater and secular arts. However, the most important source of inspiration for the performance is up to the imagination of the artists as well as of the performers as improvisation is quite common with Yakshajana. 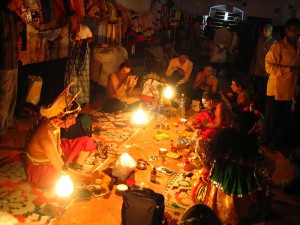 A performance of the Yakshajana consists of a group of background musicians called Himmela as well as the dance and dialogue group called the Mummelawho perform the Yakshaga prasanga. The Himmela consists of a Bhagawata who is also the singer, a harmonium called maddale for the drone and loud drums called Chande.

The Bhagavata is usually the producer, the director as well as the master of ceremonies during the event and is generally the leader of the troupe. He helps to understand the prasanga or script and provides the background story as well as the role and responsibility of each of the characters.

During the performance, the Bhagavata acts as the chief narrator and also indulges in banter with the jester or Vidukash. The performance consists of gods and goddesses as well as kiratas who perform mischief along with mythological demons called kimpurushas. There are also key characters called Kattuveshas who appear after the Bhagawata in order keep the audience hooked on the performance.

A Yakshajana performance differs depending on the area and region where it is being performed. The two most common forms of Yakshajana are Badagutittu and Tenkuttitu.

Badagutittu is prevalent in the Udupi to Kundapura area in the Uttara Kannada district. This form of Yakshajana places more emphasis on the facial expressions, dialogues or Matugarike and dances that are suitable for each character. The use of the Chadne is quite typical with this school of Yakshajana.

The Tenkutittu school of Yakshajana is common in Kasaragod, the Mangalore district, Sampaaje and the surrounding areas. A performance of Tenkutittu Yakshajana clearly shows the influence of Karnatic music due to the type of Maddale that is used. This school of Yakshajana depends more on folk art as well as classical dance aspects. The Himmela in the Tenkutittu style is more connected with the production. Tenkutittu is well known for its incredible dance steps and high flying dance moves as well as its extravagant Rakshasas or demons. 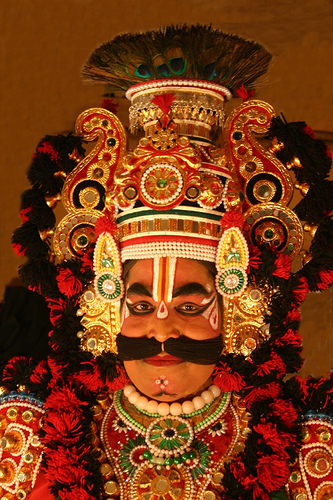 The ornaments used in Badaguttitu Yakshajana are made out of light wood and feature mirror work as well as colored stones and are covered in gold foil. The ornaments worn in Badagutittu consist of a head gear called Kireeta or Pagade, a Kavacha that decorates the chest, armlets called Buja Keerthi that decorate the shoulder as well as a belt called Dabu. The mirror work on the ornaments helps reflect light and make the whole costume feel more colorful. These ornaments are generally worn as a vest and generally cover the top half of the body. A red, black and orange checkered Dhoti is worn on the lower half of the body.

Tenkutittu ornaments use less wood in their construction and make more use of padded cloth more. The ornaments that are worn consist of a Bhujakeerti  that si worn on the elbow and looks like wings, an Edehara or a chest piece that is made of wood and is passed with paper and glass pieces and a Veeragase that is tied around the waist.

The headgear worn by the actors depend on the character that they are portraying. Less important characters wear simple turbans or cloth while more important characters wear a Mundasu which is a heavy set headgear. The Mundasu is broader in the middle than at the bottom and tapers off as it rises which gives it the appearance of a lotus leaf. A Mandasu is quite heavy and as such requires a lot of skill not only to wear it, but also dance with it.

Female costumes are usually quite simple and straight forward and are a stark contrast to the male costumes.

The facial make up of the actors vary from simple to very elaborate designs.  The motif on the face differs and depends if the actor is portraying a hero, demon or a female character. The makeup for a demon is quite elaborate and features artificial eyelids as well as white dots to showcase the violent and fierce nature of demons. These types of makeup can take many hours to complete.

The performers have also started to incorporate modern materials in the get ups so as to lighten the weight of the traditional costumes. Modern fabrics are worn instead of traditional material and thermocol is used in place of wood when making ornaments.