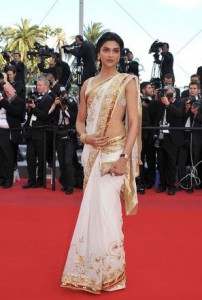 Nivi Style Saree is the most common style of draping the saree that is not only seen in India but the world over. Its point of origin has been traced back to Andhra Pradesh, India; however, its use is widespread in today’s day is no longer considered a regional drape. One can also call it a auniversal saree drape because of its popularity and usability. In a repertoire of 108 styles of draping a saree, a mix of both traditional and modern, the Nivi style saree is without a doubt the most widely accepted.

Indian women have since ancient times have draped long rectangular garments in the saree style. The upper garment, if it was ever worn with this sare-like garment, was usually referred to as the ‘uttariya’. The skirt on the lower half of the body, draped as the saree, was then referred to as the ‘nivi’ or ‘nivi bandha’.

While there are no concrete accounts on the coining of the term, they style of draping itself was originally a part of the culture of the state of Andhra Pradesh. It is believed, that this style pre-dates even the Elizabethan period as paintings from India from that time show women in nivi-style sarees, among other styles of draping.

The Nivi Style of saree is one of the simplest to drape, but does require some essential pre-requisites in the modern day. Some of the pre-requisites are safety pins, petticoat or under-skirt, and blouse.

There are many traditional as well as contemporary variants of the nivi-style saree that are prevalent in India. Among these though, there are a couple that are especially commonly seen as regional variants of the

The pleats of this type of nivi saree is passed between the legs and tucked in at the back, giving the saree the appearance of a dhoti. The legs are covered and still allow for free movement.

The Seedha Pallu or Gujarati is a variety of the Nivi style which involves tucking the pleats in as the regular nivi style while the loose end is taken around the back and brought over the right shoulder. One of the shorter ends is taken around and fastened at the back.

The nivi drape can be used while draping a saree in any fabric, right from the most traditional ones like cotton and silk to the latest materials like net, brasso, chiffon, georgette and other modern blends. This can be seen in contrast with some traditional, regional drapes that are practiced only with sarees of a certain fabric, usually cotton or silk.

Traditionally, Hindu women would accessorize the saree along with a decorative chain at the waist. This was made a part of the bride’s trousseau and was very popular in earlier times.

In modern times however, there are so many accessories that are worn with a nivi-style saree that it is hard to keep count. The reason for this vast number is because it is the trendiest drape, therefore open to more interpretations in terms of accessorizing. There are certain essential elements in styling with a nivi-drape for almost occassions such as heeled shoes, bangles, earrings, and necklace. There are other accessories that are used only at special occasions along with the nivi-style saree such as the maang tikka. 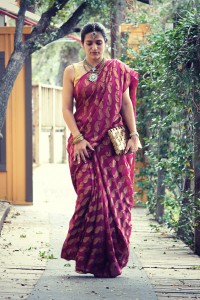 The nivi style of draping the saree has been a prevalent part of the Indian culture for so long that it has been used to depict the clothing style s of mythological characters in popular television. For instance, the television as well artistic representations of Draupadi, for instance, show her wearing the saree in a nivi-style drape. 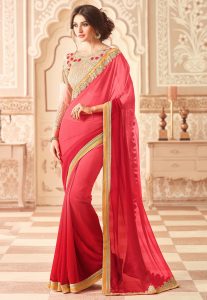 Besides mythological characters, women, in general, were depicted in many famous artworks in the nivi-style saree. This style was popularized in Indian culture through Raja Ravi Varma’s paintings, the most famous of which depicts the Indian sub-continent as a mother wearing a flowing saree in the nivi-drape.

The nivi style of draping the saree has gained such prominence that women across the globe use this drape when draping a saree. Although it started out as a specialized drape, the knowledge of nivi-style saree has been made easily available the world over. Another reason for its popularity is its relative lack of complications during draping.

Modernity and the trend of showing off the curves have influenced the drape in a way that it is fashionable and trendy to bare the mid-riff. It is no longer considered ‘indecent’ or ‘unacceptable’ to flaunt the waistline. 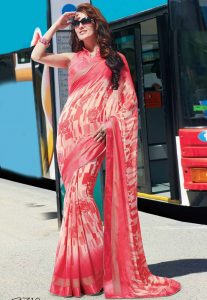 One of the most prominent innovations in the nivi-style drape is the creation of ‘readymade’ sarees. The look of the drape has been retained while pre-stitching of certain elements has also been included in the garment so as to make it easier to wear. The pleats are pre-fixed to the saree (with or without the underskirt, depending on the maker) which only needs to be slipped on like a regular skirt and zipped up on the sade. The pallu then is a loose stretch of rectangular cloth that is also stitched onto the lower garment that only needs to be taken around the back and draped over the left shoulder.