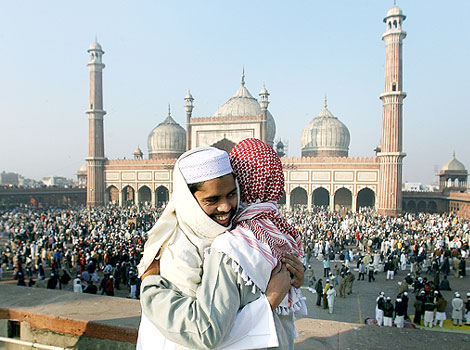 Eid ul-zuha | The Festival of Offerings 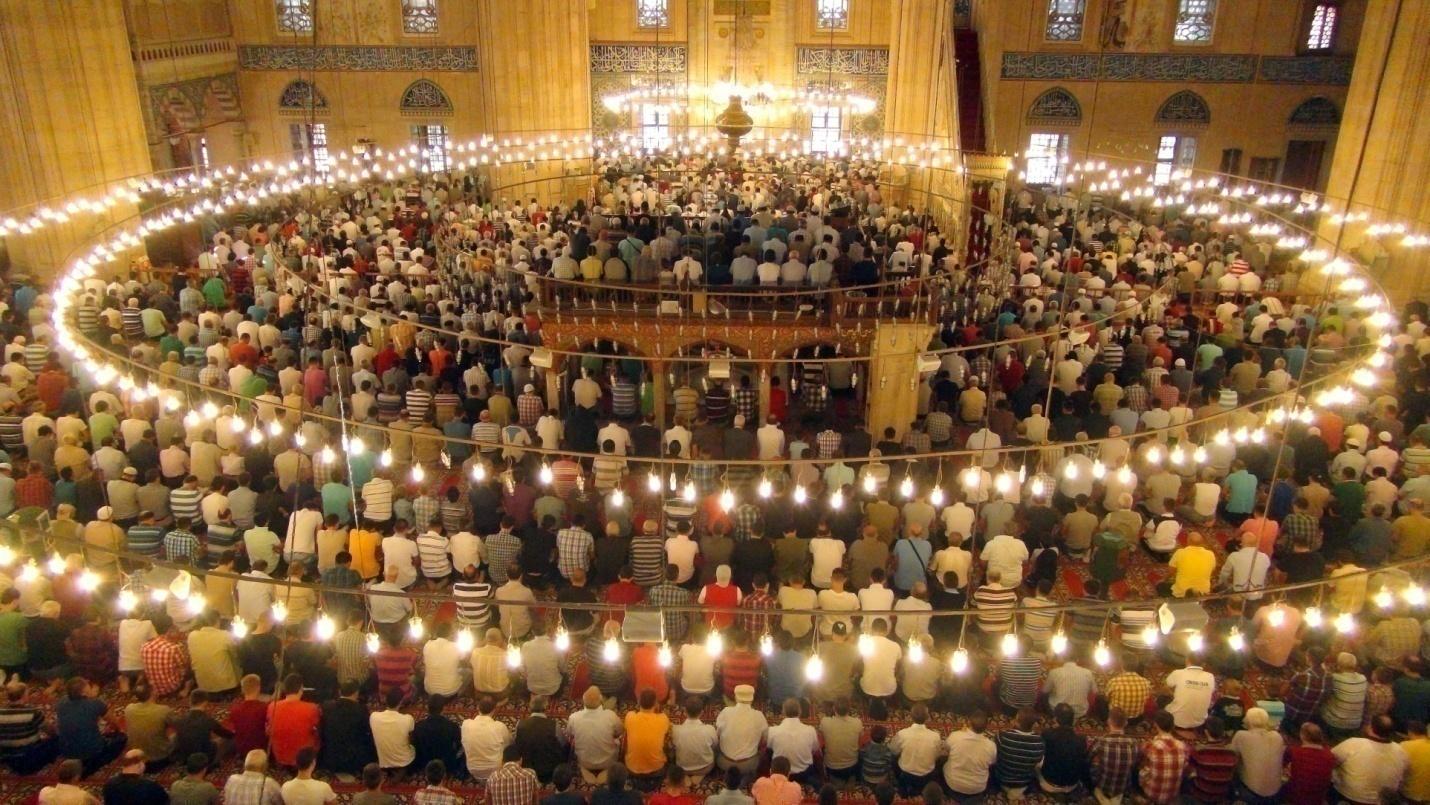 Eid ul-zuha, the Feast of Sacrifice, is one of the most significant Islamic festivals. The jubilant revels of Eid ul-zuha disperse captivating chants of ‘Allah ho Akbar’ around the world. The festival of forgiveness and charity is known by different names in different parts of the world. While in India it is popular as Bakr-id, in other countries it is known as Eid al-Adha, Id-ul-zuha, Id-ul-Azha and Hari Raya Haji. This auspicious day is observed on the 10th day of the twelfth month of the lunar-based Islamic calendar. The occurrence of Eid ul-zuha is decided on the basis of the sighting of the moon, marking the end of the pilgrimage to Mecca.

The word Eid ul-zuha, meaning the ‘the Festival of Sacrifice’, was derived from two Arabic words. ‘Id’ has been derived from ‘iwd’ that means festival, while ‘Zuha’ comes from ‘Uzhaiyya’ meaning ‘Sacrifice’. 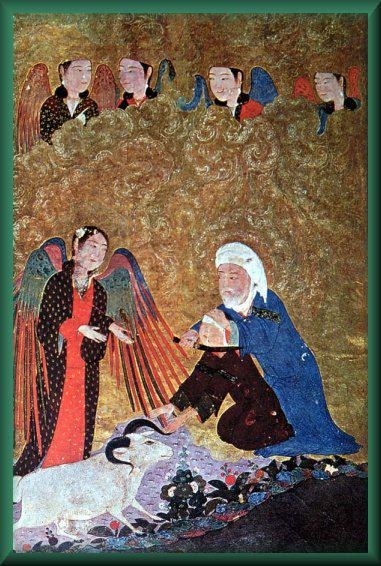 An old painting depicting the scene where God showed mercy and replaced Ibrahim’s child with a lamb. (Image: Amaana.org)

This day commemorates the sacrifice committed by Prophet Ibrahim, the friend of God. The legend says that Ibrahim had agreed for the ritual killing of his own 13-year-old son just to honor the word of the Almighty. As he passed the test of devotion, God showed mercy and replaced the child with a lamb. Since then, Eid ul-zuha is celebrated as the day of remembrance of this great sacrifice and Allah’s clemency.

Customs and Rituals on Eid ul-zuha

All the customs and rituals involved in the celebration of this festival follow the traditions of the Prophet Muhammad.  On this day, the practice of sacrificing a goat or ‘bakra’ is customary in the name of Allah. As per rituals, the ‘Feast of Sacrifice’ is shared out into three parts, of which one portion is kept by the family, one is shared with relatives and friends and the third portion is served to poverty-stricken people. The ceremony of animal sacrifice can be performed anytime during the three days of the holy month before the sun sets on the 13th day of the month. 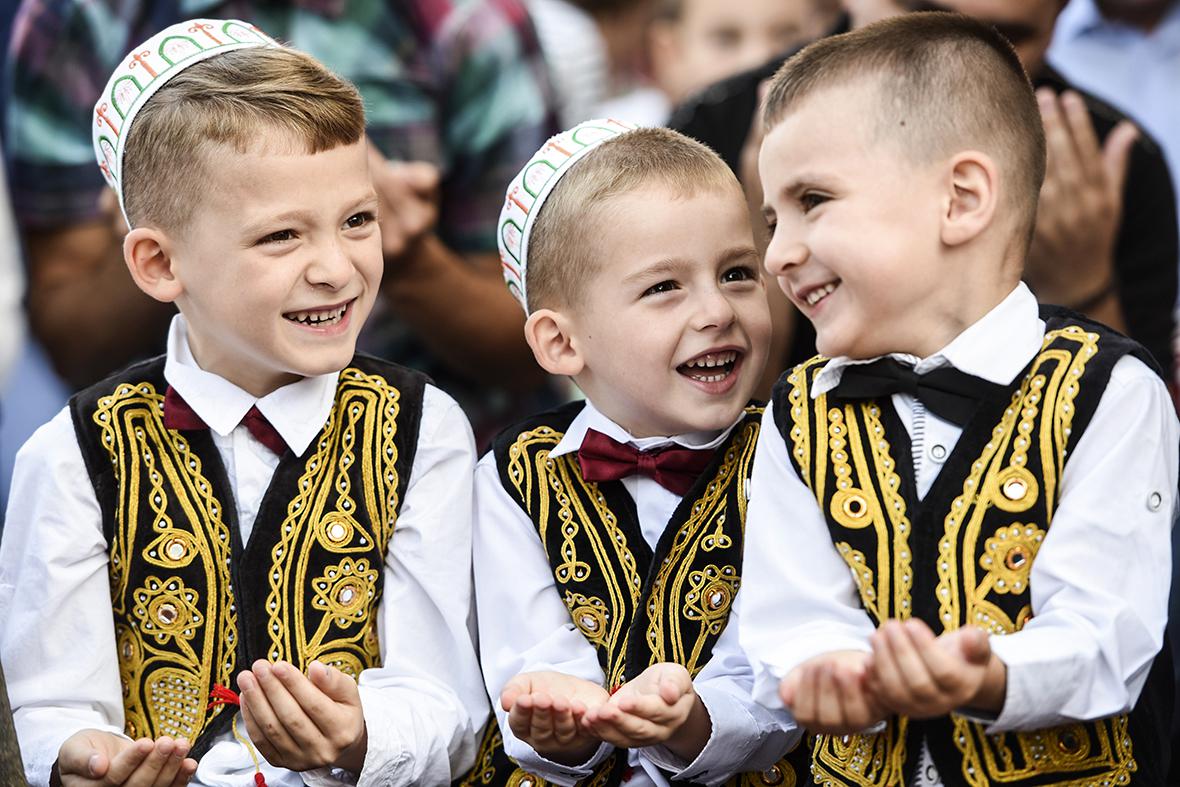 Muslim children take part in a prayer during Eid in Kosovo. (Image: Ibtimes.co.uk)

The day on Eid ul-zuha begins with a Sunnah prayer of two rakats. While the first rakat has seven Takbirs, the second rakat contains five Takbirs. The prayers include recitation of verses from the Islamic holy book, Quran. After the prayer is offered, a sermon called khutbah is delivered.

On this resplendent day, the Muslim population residing in different parts of the country indulge in grand jubilation. It is one of the most important days in Islamic culture. The day involves ritual slaughter of a sheep or a goat and devotional offerings to Allah at mosques.

On Eid, a huge number of Muslims residing in the Mughal city of Agra, head to the red stoned mosque located in the vicinity of the Taj Mahal to offer prayers to Allah. Some popular mosques in this city are Jama Masjid, Moti Masjid and Nagina Masjid. 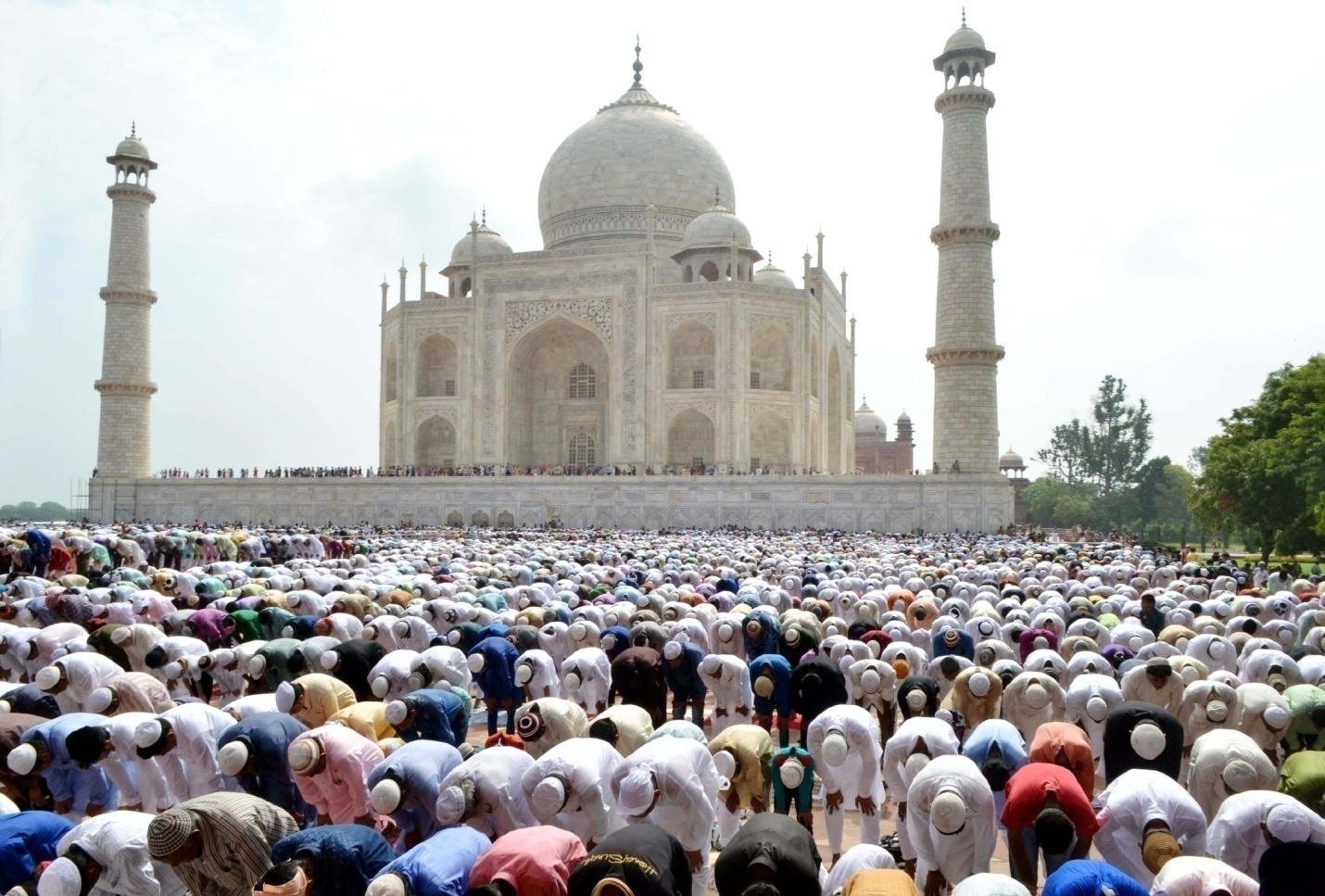 This 2015 image shows Muslims offering namaz on the banks of river Yamuna against the backdrop of the majestic Taj. (Image: Dlatimes.com)

In Srinagar, a massive gathering is observed at Hazratbal on the banks of the Dal Lake. This holy place houses a sacred token of Prophet Muhammad. 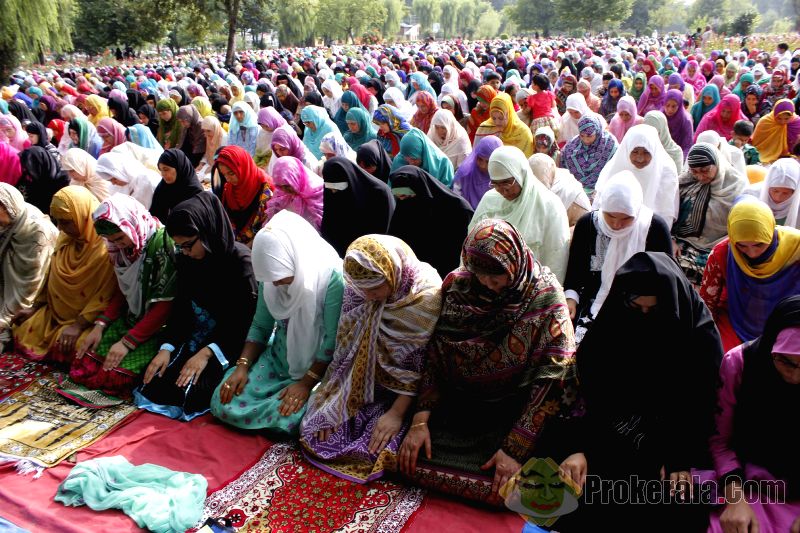 In this 2014 image, Muslim women are shown offering prayers during Eid in Srinagar. (Image: Prokerala.com)

One of the high-flying spots for Muslims is the Jama Masjid in New Delhi. This 350-year old shrine with an extensive courtyard can hold nearly 25,000 worshipers at one time. Startlingly, on significant Islamic occasions like Eid ul-zuha, the entire space is completely occupied by devotees. Other sites in the capital which host grand celebrations on Eid ul-zuha are Fatepuri Masjid and Idgah Masjid.

On this grand pious affair, Muslims put on new clothes to participate in the celebrations of Eid ul-zuha. Most devotees heading to mosques or eidgahs are seen wearing white outfits. Women, however, prefer wearing bright colours. 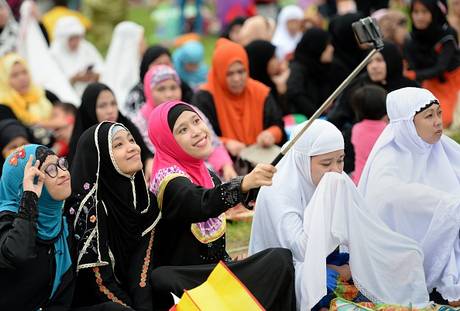 Young Philippines women in their traditional attires take a ‘selfie’ prior to Eid prayers in Manila. (Image: Independent.co.uk)

The most preferred apparel by women is a long embroidered salwaar kameez, which they wear under a black burqa, while men choose to wear a kurta pyjama or a sherwani. Women also apply heena on their hands and flaunt beautiful accessories that blend perfectly with their ethnic wear.

The joyous festival of Eid ul-zuha brings together people from different corners of the world to commemorate the teachings of Allah. Eid ul-zuha is one of two most important festivals for Muslims across the globe, especially for Muslim countries like Saudi Arabia, Afghanistan, Kuwait and the United Arab Emirates.

In Turkey, Eid ul-zuha is called as Kurban Bayrami. On this festival, people here enjoy an official four-day holiday. It is one of the most eminent religious festivals celebrated in Turkey. All the devotees embrace and greet each other with the customary greeting, Bayraminiz mübarek olsun or Bayraminiz kutlu olsun, meaning ‘May your Bayram be blessed’. Bayram in Turkish means religious celebrations. 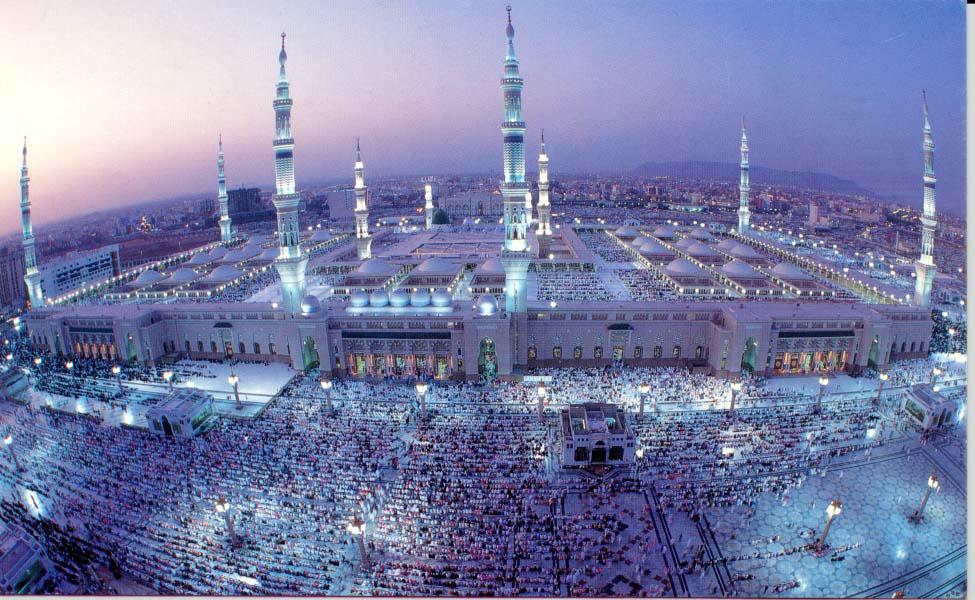 Millions of worshipers at the Grand Mosque in Mecca. (Image: Labibliotecadelislam.tk)

Celebrations throughout the globe involve customs and rituals that are more or less the same. Besides the customary ritual of slaughtering an animal, people with friends and family visit a mosque or eidgah to offer services to Allah. Also, this evening involves grand feasting and celebrations.