Silk fabric, also known as ‘Paat’ in East India, Pattu in South India and Resham in North India, is a natural fiber produced from the cocoons of mulberry silkworm via a process called Sericulture. The yarns produced from the process of sericulture are used to weave a variety of textiles.

The fabric has a shimmering appearance, though has interrupting patterns of weave due to its natural fibre. The triangular prism-like structure allows the fabric to refract the lights, hence producing various colors in different lighting. Today, India is world’s second largest producer of silk after China. Not only that, India is also the largest consumer of Silk, Celebrations playing vital role in day to day life of any Indian.

The origin of Silk dates back to Indus Valley Civilization between 2450 BC and 2000 BC. However, the origins are still also seen 2500 BC in China.

The processing techniques of Silk – degumming and reeling, were taken from the Chinese technology, where Silk was originally believed to be born. Majorly, 97% of the raw silk comes from five Indian states – Andhra Pradesh, Karnataka, Jammu and Kashmir, Tamil Nadu and West Bengal.

Since it is a natural fiber, Silk has a smooth and soft texture. The elasticity of a silk fabric is poor, hence if stretched; it takes the shape as it is. It can be weakened if exposed to too much sunlight. It may also be attacked by insects, especially if left dirty. 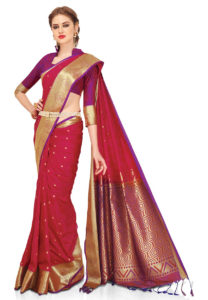 Unwashed silk chiffon may shrink up to 8% due to a relaxation of the fiber macrostructure, so silk should either be washed prior to garment construction, or dry cleaned. Dry cleaning may still shrink the chiffon up to 4%. Occasionally, this shrinkage can be reversed by a gentle steaming with a press cloth. There is almost no gradual shrinkage nor shrinkage due to molecular-level deformation.