Alta is a bright red dye or liquid color used to adorn palms and feet in simple patterns. Painting the soles with this red liquid dye and adorning the upper foot with elaborate designs to bring out the beauty of the feet, is a common Indian tradition, particularly during religious festivals and weddings.

A common ritual followed by the womenfolk in West Bengal, Alta is also known as Mahavar, which is dark pink in color. In fact, a Bengali bride is incomplete if her hands and feet are not adorned with this. In other words, it is another form of putting Mehendi or Heena.

Its application not only enhances the beauty of the feet but also provides a cooling effect to the body.

The discovery tale is still unexplored; yet again it does have evidence in the Hindu Upanishads on how it became an important element of Indian Hindu Tradition. It has been found as one of the Make-Up stages of ‘Solah Shringar’ or 16 Bridal Adornments. It is also traced back into the mythological depictions of Lord Krishna seen applying Alta on to his beloved Radha’s feet.

Another notable fact about the significance of Alta was that it resembled blood, which is symbolic of fertility and prosperity.  However, the Islamic invasion of India brought along with its new customs and traditions – henna or mehendi, being one of them.  Due to the increasing influence of Muslim culture, the usage of Alta was slowly replaced by Henna in other parts of India.

It was traditionally made from betel leaves. Later on, the same was replaced with artificial products like vermillion (Sindoor) or Kumkum  (Red Powder) to create similar liquid. In today’s time, the mostly available Alta is made out of lac and other chemical colors.

Rituals of Alta & its influence

It is more prevalent in West Bengal, where a woman devotes as much attention to adorning her feet with Alta as much as she does to her hair and face.  Wearing Alta on Durga Puja is a common ritual for Bengali womenfolk. 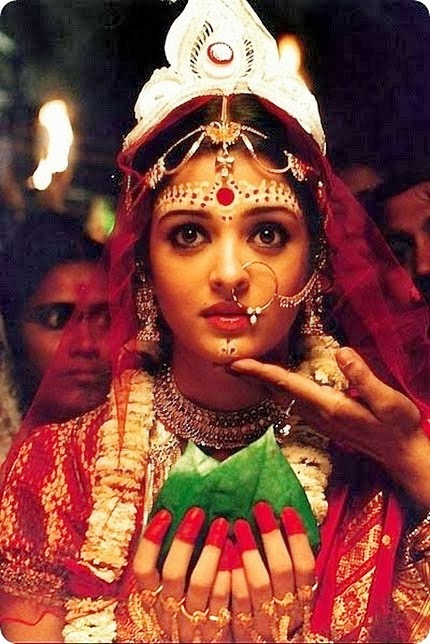 In few parts of India, it is not only used as an adornment for the feet, but also used to perform an important post-wedding ceremony in which, the bride enters her in-laws home for the first time. Before entering the new house or house of the in-laws, the newly-wedded bride steps into this red dye and then walks inside the home, leaving a trail of her footsteps. This trail indicates that Goddess Lakshmi in the form of the bride has now entered the home.

This red dye is a very important part of Oriya wedding ceremonies as the color red stands for purity and prosperity.

According to Hindu Mythology, the images and sculptures of the Goddesses, particularly that of Durga and Lakshmi is painted with Alta.  The same is for depictions of Krishna and Radha. 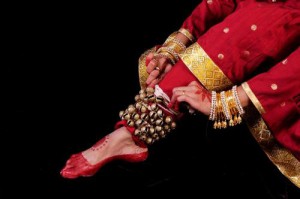 It is an inherent adornment for mostly all the Indian classical dance forms such as Bharatnatyam, Kuchipudi, Odissi, Kathak, Mohiniyattam and Manipuri. It has been retained as a necessary part of the dancer’s make-up routine.   It is the most striking part of an Odissi dancer’s overall look as her hands and feet are intricately adorned with bright red liquid color.  The red hands made the mudras (gestures) look splendid and dramatic.  All the Indian dance forms depict stories of various gods and goddesses and hence it is a significant part of the Vedic 16 bridal adornments also known as Solah Shringar.

It is an easy adornment to apply, although designing intricate patterns with Alta is impossible. Alta basically employs simple painting techniques with a brush that can be accomplished by any person and doesn’t require any artistic skill.  Advantage of Alta is that it dries quickly unlike Henna or Mehendi, which takes a very long time.

Till date, the audiences have only seen period movies or Bengal-inspired movies such as Jodha Akbar, Parineeta and Chokher Bali, wherein the lead actresses have applied the glorious red liquid color on their fingertips.  However, if Bollywood movies do ever film an ‘Alta ceremony’ in the near future, complete with big stars and a song-dance routine- then it would set a new trend and bring Alta back into the picture.  As of now, only traditional South Indian, Maharashtrian and Bengali households living in areas other than metros have stuck to the Alta ceremony as a pre-wedding ritual.