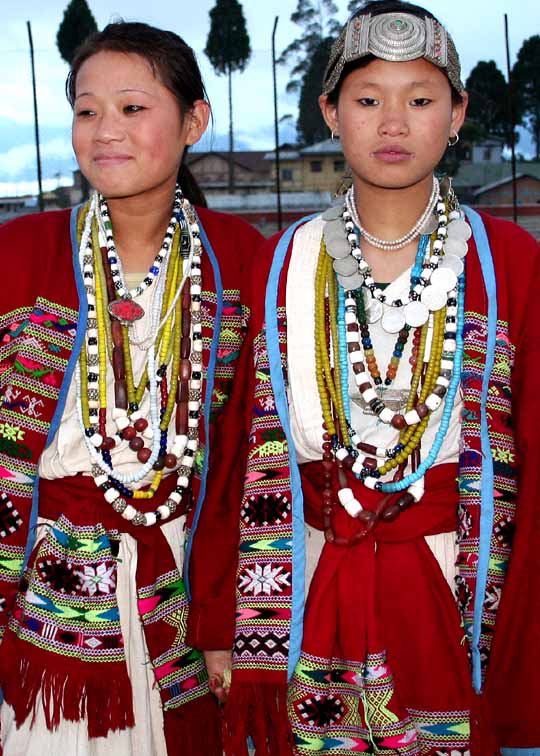 The state of Arunachal Pradesh is an exotic collection of socio-cultural life that blends many types of cultures, and traditions. Shawls, skirts, wraps, lungis are the fashion favorites here. With 26 distinct tribes and over 100 sub-tribes, Arunachal Pradesh is a treat for those interested in a glimpse of cultural diversity. Being essentially a tribal state, festivals and social events like weddings are an integral part of the life of the people here. 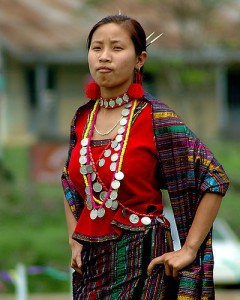 The major tribes of Arunachal Pradesh are Adi, Aka, Galo, Nyishi, Apatani, Bori, Tagnis, and Bokar.

While most tribes are ethnically similar, having derived from the same ancestors, their geographical separation has brought in the different customs in dressing styles. The tribes of Arunachal Pradesh are known for their weaving, with the Aptani tribe being the most advanced in its techniques. Using fibers from trees, goat and human hair, they create ceremonial coats, shawls, skirts, sashes, lungis (loin cloths) with various forms of embroidery.

Geometric patterns dominate the clothing worn by the Adi, Aptani and Mishmi tribes, with the most popular motif being that of angular designs and zig-zag lines. Even floral patterns take on a more geometric form in fabrics of these regions. Other common patterns to be seen are stripes. The simple, straight lines in the clothes of Adi and Aptani tribes are reflective of a more disciplined way of life, while the Mishmis display more celebratory patterns in their attires.

The colors and designs on fabrics hold a symbolic meaning for every tribe. For example, in Tuensang, motifs of shapely pointed triangles depict arrows or hornbills, and the small red squares on a sanctum cloth represent ferment used for making beer. The Color red in shawls symbolizes blood enemies, blue stands for sky, and black represents the night. 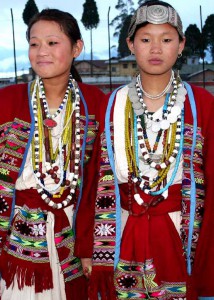 Women wear a sleeveless chemise with an embroidered, full-sleeves jacket, along with a petticoat or skirt. The attire is never usually complete without ‘Mushaiks’ or waistcoat. A skull- cap filled with Yak hair, called as the ‘Gurdam’, adds elegance to the overall attire.

Belts are an important part of costumes for women, both in daily wear and ceremonial dresses, and in fact, is a symbolic representation of the social and marital status of girl. Unmarried and married Adi women wear different types of belts around their waist.

The clothing styles and designs have largely been uninfluenced in Arunachal Pradesh and tribal communities still wear their ethnic costumes for ceremonial functions. However, there are small-scale inspirations in form of motifs that have made their way into the state’s clothing designs from Tibet and Bhutan. This is evident in some weaves of the Monopa tribe. 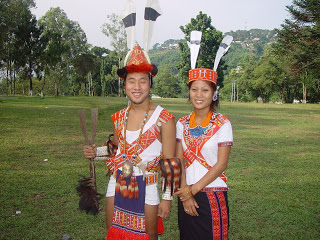 The main craft forms of the region are based on cane and bamboo, and people create beautiful hats with embellishments of beaks and feathers of birds. Silver rings and earrings embroidered with variously colored beads are a popular fashion accessory in the region.