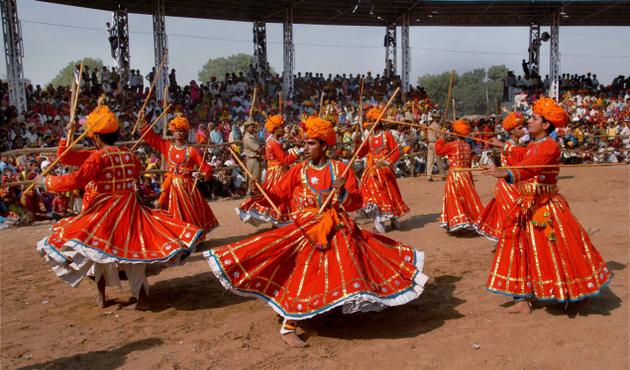 Dandi Gair is a variation of the Gair dance performed in the Marwar region of Rajasthan. This folk dance is performed by the men and women of the Bhil community. The word Gair means ‘circle’ in the regional language and therefore is performed within circular formations. The Dandi Gair is different from the overarching Gair group in that its movements are performed in circular formations.  Other than that, the movements themselves, the music and the costumes remain similar.

The Bhil community of Rajasthan is one among the many Adivasi groups or aboriginal people of India. During the Rajputana rule, they were employed in various capacities such as shikaris (hunters) and as army personnel. It is believed by the local people that the movements and the formations in the Dandi Gair is drawn from the military lives of the Bhil people.

Inspired by the military experience of the Bhil people, the Gair dance (and by extension Dandi Gair) involves costumes, accessories and movements that are reminiscent of that life. The Bhil people perform the Dandi Gair on upbeat music accompanied by beats lent by percussion instruments as well as the long thin sticks that the men and women performers wield.

In recent years the Gair and Dandi Gair have gained popularity at festival-time, like Holi and Janamashtami. The celebrations of these festivals in Rajasthan are incomplete without the Gair dance by the Bhil folk.

Although originally this dance was performed by both men and women, in today’s day it is predominantly performed by men. Therefore, even in popular discourse, the costumes and the performances by all-male troupes are discussed. Women’s role in the performance of this dance is limited to the point of being non-existent in discourse.

This dance form is very popular and has gained immense recognition in urban areas as well. This dance features heavily in regional fairs and festivals held within the state.

The Dandi Gair dance is performed in a huge circle that surrounds the singers and musicians. While the background score is a mix of the singers singing melodious folk songs to the beats of the dholak, nagada and dhol, the dancers use the sticks in their hands known as the Khanda.

The performers move in and out of the circle during the performance and also move in circular motion. During each turn, the performers beat the sticks and create thumping beats that complement to the melody. The movements follow a particular pattern wherein the dancers first move clockwise and then anti-clockwise. While these are the basic movements, complicated patterns are also made with turns and other complex movements, based on the proficiency of the troupe.

The costumes of the men who perform the Dandi Gair include a long kurta that has a fitted bodice till the waist and then goes on to open up into a flared pleated skirt. These kurtas can be either white or red in color and may be embellished with either silver or gold gota patti work on the pleats and the borders as well as the sleeves and the neckline. The ends of the kurta also usually have blue ribbons on the edges that give the performance a very colorful appearance when the performers twist and turn in circles. These kurtas are usually paired with white churidar pants and saffron color turbans for the head. In certain variations of the dance, red colored fabric can also be used for turbans. The costumes also involve the tying of a simple cloth around the waist like a sash in a color similar to that of the kurta.

The accessories that go with the costume are heavy. For instance, the men tie ghungroos or bells around the ankles that chime along with the movements of the performers. Besides the sticks or the Khanda, the performers also carry swords and a shield that is fastened at the back. 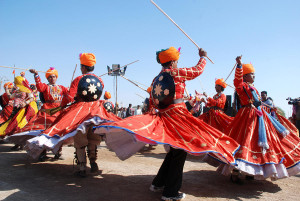 The traditional Dandi Gair performance is done barefoot although, in recent years, men have begun using comfortable running shoes that make such emphatic movements easier on the legs.