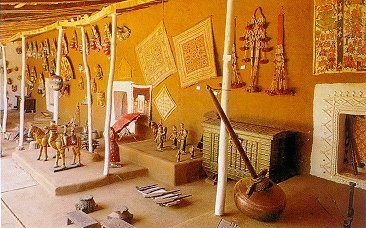 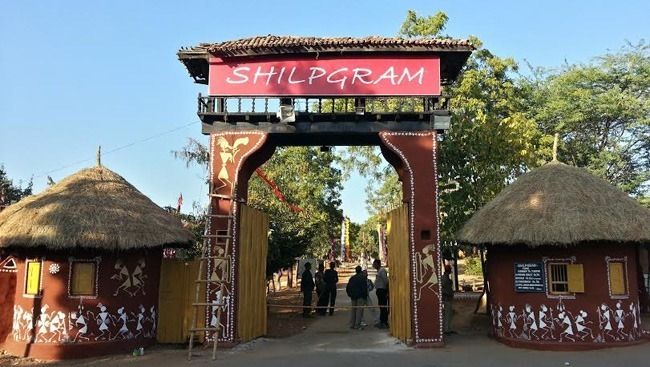 The Rustic Charm of the Fair Begins at the Entrance (Image: https://in.pinterest.com/)

Shilpgram is an extremely well known art and crafts fair that takes place in Udaipur, Rajasthan. The word ‘Shilpgram’ translates to ‘Craftsmen’s Village’ and this fair is known for being an extensive ethnographic museum that brings into focus the sheer diversity in the crafts and arts of India. Over 26 huts are set up at the foothills of the Aravali mountain range that offer consumers over 70 acres of unique and interesting products to sample and purchase. This is an annual event that is attended by craftsmen from all over India looking to showcase and sell their products.

The fair was conceptualized and established in order to promote the indigenous cottage industries of Rajasthan. Being an arid state, Rajasthan’s main source of income is derived from tourism and handicrafts as opposed to agriculture, which is the norm in India. Another major aim of the Rajasthani Government with regards to this fair was to make Rajasthani arts and crafts well known and popular at a global level. Hence, keeping in mind that the main tourist season in the state is during the winter when the temperatures are milder than usual, the fair occurs annually in the second-half of the year in order to optimize the sales and the amount of awareness that can be spread about these arts.

Over the expanse of the 70-acre land where this fair is held, there are various performances and segregated centers where spectators can have a look at different ethnic products. Some of these are as follows:

Out of the 26 huts, there are 7 huts that are meant to represent Gujarat. These huts offer previews into the Gujarati culture in the form of presenting and selling their ethnic attire as well as displaying local handicrafts. In terms of ethnic attire, the Banni cluster of huts is the most popular. These huts represent the Harijan, Rebari and Muslim communities living in Gujarat who are known for being proficient in skills such as embroidery, mirror work, bead work, weaving and even woodwork. These huts sell exquisite bandhani work lehengas and suits, gamthi embroidery work, mirror work on lehengas and suits as well as beadwork.

There are 5 huts in total that represent the state of Rajasthan. These huts showcase potters and their work from the village of Dhol in the Mewar region. Rajasthani ethnic attire, such as the traditional lehenga choli with mirror work, angrakhas, and bandhini attire can be found in these huts. However, a majority of the huts from Rajasthan sell crafts more than ethnic apparel.

These huts are known for their weaving and cane work and are the go-to destination for consumers looking for ethnic furniture. Dokra work, which is a style of metal jewelry unique to tribal communities in central and East India (including east Maharashtra) can be found here.

Another famous hut in the Maharashtrian cluster is one from Kohlapur that specializes in selling leather footwear known as Kohlapuri chappals, which are quite common in India and popular in ethnic couture. They are worn by both, men and women and predominantly worn with salwar kameez suits (when worn by women) and kurta pajamas (when worn by men). 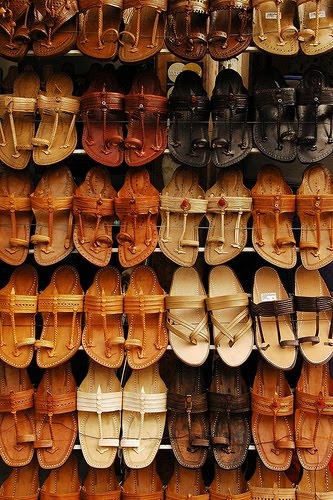 There are 5 huts representing the state of Goa and they sell pottery work as well as items woven from grass and cane.

Shilpdarshan is a widely popular program in the Shilgram Art and Craft Fair. Organized at a spacious amphitheater that can accommodate over 8,000 onlookers, this program is where consumers go to have a look at the regional performances. Dances from all over India are showcased here, as well as prominent Rajasthani dances such as the Garasia dance and the Dhol Thali Nritya. Dancers performing these dancing wear traditional garb peculiar to their states. Theater performances showcasing folk tales and religious tales are also set up here.

Tourists from all over the world attend this festival in order to be exposed to different cultures from Rajasthan, as well as the rest of India. This fair is considered to be a good place to purchase Indian ethnic attire at very low, budget-friendly prices. Items made from camel leather as well as hand woven garments can be purchased here.