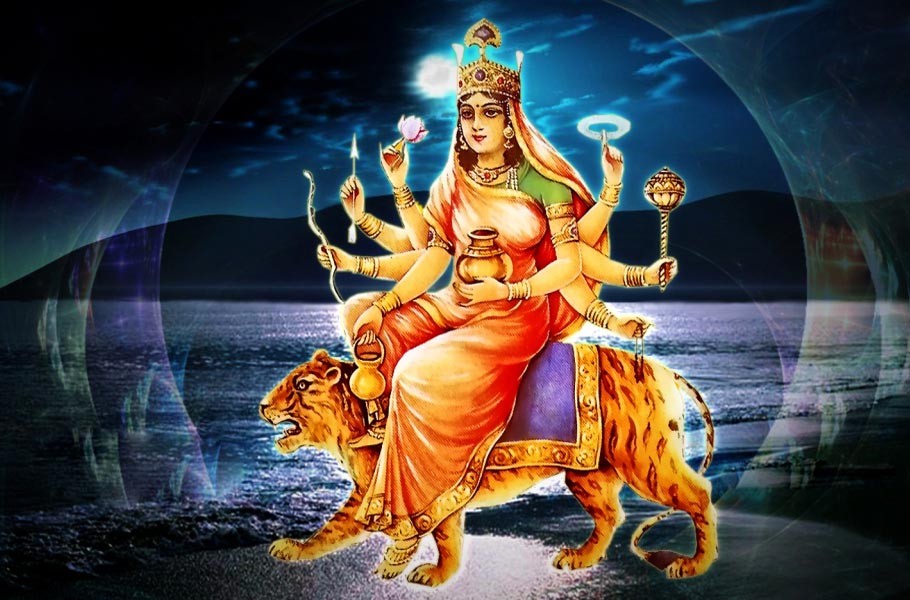 Goddess Kushmanda, the fourth form of Goddess Durga, is worshiped on the 4th day of Navratri (Navratri Chaturthi). It is believed that it was this form of Adishakti that created the universe with her smile. Several pujas, shlokas, and vedic rituals are performed to invoke this Ashtabhuja (eight arms) goddess. It is said that her complexion glows with a golden light that radiates from her persona. Worshiping this goddess is believed to bestow spiritual fulfillment and harmony in the life of all devotees. Navratri Chaturthi falls five days before Dusshera.

According to Durga Saptshati, Goddess Durga was very pleased with her avatar of Kushmanda. It is believed that the supreme goddess of power or Adi-Parashakti, appeared in the form of Siddhidatri from the left side of lord Shiva’s body. After taking the form of Siddhidariti, Goddess Parvati started to live inside the core of the sun and, hence, came to be known as Kushmanda Devi. This implies that Kushmanda Devi is the only goddess who resides in the core of the sun, from where she controls the entire solar system.

The name Kushmanda is a compound word that consists of three Sanskrit words ‘ku’ (meaning-little), ‘ushma’(meaning-warmth) and ‘anda’(meaning-egg); which combined together means a little warm cosmic-egg.

Kushmanda Devi is depicted with eight hands. She has kamandal, dhanush, bada and kamal in the right hands whereas, she is holding an amrit-kalash, jap-mala, gada and chakra in her left hands. Her beautiful female form is seen sitting on a lion that denotes dharma and justice.

Kushmanda Devi is invoked with a Kushmadevi Puja Mantra. Kushmanda Puja begins with inviting other gods, goddesses and their families by worshiping a kalash. Several strotra path, kawach and aartis are performed during Kushmanda Devi’s Puja. Devotees keep flowers in their hands to offer to this goddess. This offering is called naivaidhya or naibidhya. Curd, milk and halwa are distributed as prasad among devotees. According to shastras and puranas, Lord Shiva and Brahma must be worshiped after the Kushmanda Puja. Kushmanda Puja performed with incense, dhoop and durya is considered to be highly auspicious.

Yogis, saadhaks and bhakts can pacify Kushmanda Devi, even with the slightest devotion and purity of mind, to enter Anahata Chakra for pure bliss. This deity takes away all sorrows and troubles from the life of her bhakts and blesses them with good health, mental peace and prosperity.

As it is said that this goddess’s favorite vegetable is pumpkin, it’s no surprise that it is offered to her in her honor. It is also believed that this is the only goddess who can bestow 8 siddhis (perfections) and 9 nidhis (jewels) to her saadhaks.

Meaning: “Goddess Kushmanda, who holds two pitchers full of wine and blood in her lotus hands, is propitious to me.

What you can wear on this day

Navdurga Puja spans through nine days. Devotees are excited to wear the nine colors associated with each day. While Kushmanda Devi is seen wearing a Red color saree, devotees are to adorn the color ‘Green’ for the fourth day. Instead of everyday clothes, people prefer wearing traditional and festive attires during this festival.

A traditional saree is one of the most preferred dresses that women like to drape themselves with. This flowing fabric can be accessorized with bangles, light ornaments and ethnic footwear. Ladies can opt for elegant silk, crisp cotton or soft chiffon sarees in orange color or go for a designer label.

Nothing can beat the comfort of wearing a traditional Salwar Suit. This three-piece outfit goes well with ornaments, traditional jewelry and a good pair of sandals. While the Kurtas are comfortable, the Salwaar facilitate easy movement, with the Dupatta being used to cover one’s head during the Puja.

Men too, like to get dressed appropriately for this occasion. The timeless tradition of wearing ethnic Kurta Payjama finds appeal in the eyes of cosmopolitan men. A traditional kurta pajama can be worn with a pair of classic mojaris for an ethnic and stylish look.

Men wanting to go the extra mile while getting dressed for this puja can opt for a classic dhoti-kurta. This dress is not new to the country; rather, it was the most preferred outfit in the bygone era. Cosmopolitan men and young boys, who are beginners to the art of wearing a dhoti, can find a pre-stitched dhoti in the market. A pair of Indian chappals, embellished with stones and beautiful patterns, is a great fit for this desi dress.

A suitable hairstyle completes the appearance. Women with longer hair can wear it in a simple low bun tied at the nape with an ornate jooda-pin. They can also go for a high bun if they are wearing a designer label. Thick long hair looks amazing in a ‘French Plait’ that is studded with stones or a white gajra. Shiny equal-length hair can be left open.

Men can also get their hair styled according to their attire. They can go for a gelled look on combed-back hair or opt for an executive hair cut. Long hair can also be tied in a pony-tail.