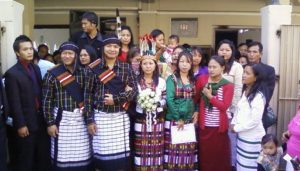 The land of the blue mountain is the name that is associated with the north eastern state of Mizoram. It is one of the newest states in India and is well known for its unique customs and cultural values. The people hailing from the state are called Mizos, and are distinctly marked for their exclusive sense of fashion apart from their skill in music.

It is a much known fact that each and every community in India has a wedding ceremony that is distinct and reflects its culture and traditions. The same is the case with a Mizoram wedding as this ceremony says a lot about the Mizo people. The 19th century brought some major changes in the lifestyle of the Mizo people as most of them turned to Christianity and the Christian wedding customs were also combined with some of their own.

Marriage payment is a popular trend that can be seen in a Mizo wedding. If you are wondering about the meaning of this tradition then it refers to the payment made by the groom to the bride’s kin. Mizo people are not the only tribe in India that follow the tradition of bride pricing in their weddings as there are some other tribes as well. The boy approaches the family of the girl and settles the price of the bride, and following that the wedding ceremony takes place.

The wedding ceremony in Mizoram is generally predated by courtship and then engagement. The girl and the boy are given the liberty to know each other and form chemistry during their engagement period. Most of the Mizo people these days follow Christianity and hence their weddings also get solemnized in a church. A traditional Mizo wedding is quite different from the other community weddings you get to see in India.

One of the most important traditions followed in a Mizo wedding is that a bride gives a Puandum to the groom which happens to be a traditional rug. This rug brought to him by his bride is wrapped around him at the time of burial. There are several types of Mizo weddings and these types differ as per the tribes that reside in Mizoram.

Mizos mostly have a Christian wedding and hence the attire too is as per the wedding customs. The bride dresses herself in a white gown and almost every Mizo bride who gets married in a church dons a beautiful white gown for her special day. The head of the bride is covered with a veil and she holds a bouquet of flowers in her hand. The color white symbolizes virginity and purity and hence it is the color you will see on a bride who is getting married as per Christian traditions and customs. Some of the brides in Mizoram choose to wear their traditional dress of puanchei on their wedding.

Puanchei is a spectacular dress which is donned by the girls hailing from Mizoram. This dress is a trademark on joyous occasions such as weddings and various festivals celebrated by the Mizos. Puanchei has been a part and parcel of the Mizo culture for a long time. Earlier it was only made by hand but today machines are used for the same. The fabric used is cotton and it is usually coupled with a white blouse. 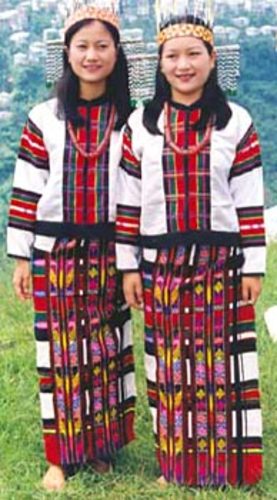 The groom is also the center of attraction on his wedding day and looks dapper dressed in a suit which is generally black in color as in most Christian weddings.

There have been no notable changes in the attire and customs followed in a Mizo wedding. However, new styles and designs keep getting introduced in the dresses worn by the bride and groom on their wedding day.

There is no heavy jewelry involved in the wedding outfit of the bride as is seen in most Indian weddings. The bride mostly opts for silver over gold since that goes best with a white wedding dress. The groom too does not accessorize much on his wedding day. Simple and elegant is the tone of a Mizo wedding with little or no accessory.

The wedding day is indeed the most important for both the bride and the groom, and hence their wedding attire holds a special place in their life. These have to be maintained with care so that they can be cherished for the rest of one’s life. A wedding gown must be kept away from light, fluctuating weather conditions and dust in order to preserve the perfect white color and the novelty of the fabric. Ideally, it must be kept in a large cardboard box since that would ensure the longevity of the attire.