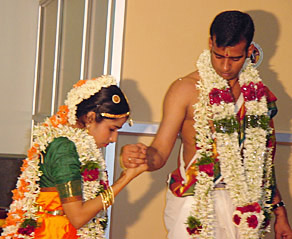 Weddings in the region of Tamil Nadu are diversified. There is no one style of wedding observed. The different classes observe different wedding traditions. But, there are some styles or rituals that are followed by all classes together. The best part of weddings in this region, in particular, is that all wedding ceremonies are conducted in the wee hours of the morning. By the time its afternoon, the bride and groom are married, and have a few hours in hand before the reception is conducted. Also, in most Tamil weddings the groom also plays a heavy role in the overall preparation. Most of the vedic mantras are said with a definite reason in mind. The reason is to ring in happiness and peace in the couple’s life.

The best part of Tamil or in general the Dravidian culture is that nothing has changed much since its inception. Most of the rituals that were conducted by a particular class are still observed by one and all. Most Brahmin weddings in the Tamil region differ in some ways from the Non-Brahmin weddings. The normal Tamil weddings would have a ritual Panda Kaal Muhurtam wherein both families go out and seek the blessings of the God so that no issues arise in the wedding. Vratham is a custom wherein both families observe fast before the marriage ceremonies are over. Nandi is where the families seek blessings from their ancestors, while Janavasam is where the bridegroom comes to the marriage venue in a car.

The normal Tamil weddings would have a ritual Panda Kaal Muhurtam wherein both families go out and seek the blessings of the God so that no issues arise in the wedding. Vratham is a custom wherein both families observe fast before the marriage ceremonies are over. Nandi is where the families seek blessings from their ancestors, while Janavasam is where the bridegroom comes to the marriage venue in a car.

Nichyadartham is where the bride seeks blessings of Lord Ganesha. This is also similar to an engagement ceremony. Also, during this time the groom’s family gifts saris and other things to the bride. In a Brahmin Tamil wedding the rituals followed before marriage would include Vratham, Nichyadartham, KasiYatrai and Janavasam.

KasiYatrai is a typical Brahmin tradition where the groom decides to take Sanyasam and the father in law convinces the groom against it.  The wedding rituals are mostly the same for both the wedding cultures. Kanyadanam is an important marriage ritual conducted in a varied way in the lands of south India. Traditionally the marriage ends with a lot of games between the bride and the groom. Post marriage the families visit a nearby temple to seek blessings of the Lord. 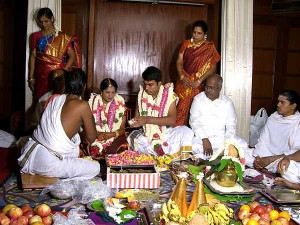 The Brahmin brides drape themselves in Kanjeevaram silk sarees in a Madisar style. The sari is usually 9 yards and the color chosen for the bride is maroon. In the Non-Brahmin style of weddings, the bride is draped in a six yard saree which is made of Kanjeevaram silk. The colors are in a contrasting pattern. Gold jewellery is a must and, most of the jewelry is huge and traditional. 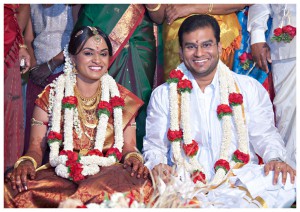 The earrings are huge diamond studs that look ancestral and beautiful. The neck piece is also quite traditional with a tinge of modernity. A waist band is a compulsory tradition for the brides in the Tamil region. The brides of Brahmin origin would wear the hair in a bun style and adorn it with flowers. The brides on Non-Brahmin origin would either plait their hair or style up their hair to match the occasion. Flowers are compulsory for both the bride and those attending the wedding.

The females in the wedding would wear the Kanjeevaram silk saris in bright contrasting colours. Kids are dressed up in pattupavadai. The groom wears a pattu (silk) veshti and an angostram (a silk cloth). The men are bare chested during the wedding rituals. The male members of the family are seen wearing a patuuveshti and either a kurta or angostram to cover their upper part of the body. The veshti is normally off white or cream in color with a colorful border.

Today, the dressing style has changed a bit. Though there are no changes observed in the Iyer or Iyengar style, other classes of Tamil Nadu have changed significantly. A lot of people wear shirt and trousers to attend the wedding. Women’s dressing styles have been slightly influenced by the northern culture. A lot of northern influence has crept into the southern wedding style.