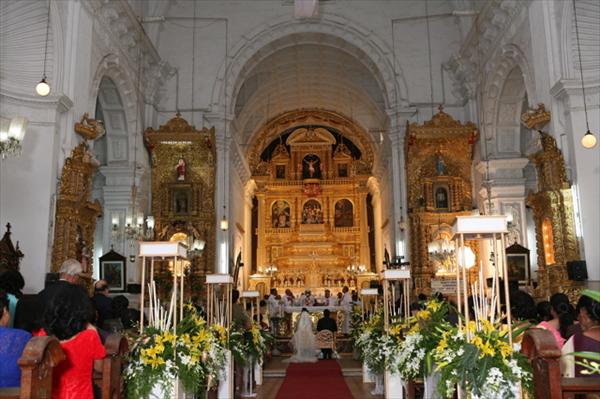 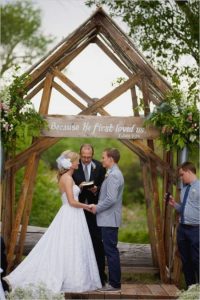 Goan Catholics have many Indian customs and traditions when it comes to weddings. There are various distinct ceremonies that they conduct such as the ‘Ros’ in which parents, relatives and friends gather two days before the wedding and bless the couple who are then anointed with a concoction of coconut oil and coconut juice called ‘Ros’. This is then followed by Resper, nuptial blessings that take place in the church, and the ‘Kazar’ (wedding) and ‘Vor’ (the wedding reception party). Modern Goan Catholics have a typical white wedding, which is symbolic of Christian weddings. A lot of the other aspects of the wedding such as the decor, flowers and ballroom dancing are inspired by the West.

A Goan Catholic wedding ha a set of rituals that are followed even now.  The Ros is much akin to the pre-wedding ceremony that takes place in other religions in which the bride and bridegroom are anointed with a special mixture called Ros.  Then this is followed by a ceremony called ‘Resper’ is which the couple are blessed in Church. Thereafter comes the big day – ‘Kazar’ or the wedding which is then followed by the wedding reception party or the Vor. 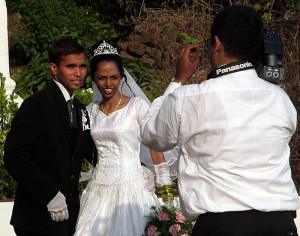 Women generally dress up in gowns and dresses inspired by Western designs and the men wear western-styled suits.  All the elements of a typical Christian wedding are present in a Goan wedding such as the bridal entourage that comprises of the flower girls, the ring bearer, the groomsmen, the maid of honor along with the best man. The traditional western live band and ballroom dancing are other elements that complete a Goan wedding.

A ‘white wedding’ is what can really be used to describe a typical wedding in Goa, however, the Indian tradition that provides a little twist to the ‘white wedding’ is the red dress/saree that is to be worn by the bride on the day preceding the wedding known as the ‘Saddo’. Another Indian ceremony called the ‘Chuddo’ in which the bride is to wear bangles. Goans are very traditional and even though the small state is strongly influenced by the western culture, yet the traditions and customs are a holistic mix of both Indian and western which make it very unique.

A lot of the Catholic marriages and unions are sought through a matchmaker or a middleman who acts as a mediator between the two families. After the proposal is finalized and a decision has been taken from either side, the details of the wedding are discussed and this is known as ‘utor’ or promise. Next comes the engagement in which rings are exchanged and this ceremony usually takes place at the groom’s house. The bridegroom’s ring is placed in a special box that also contains a small statue of Infant Jesus along with some money from the bride’s side that signifies the dowry in which every denomination of Rs. 100 is taken as Rs. 1000 and the ‘yezman’ (an elder) is responsible for counting the money that amounts towards the dowry. The couple then files an application for Civil Registration in the Civil Registrar’s Office in the presence of their parents, two witnesses and close relatives. Then comes the ceremony of reading the three wedding banns or proclamations of marriage. Upon the first bann, the bride is invited for lunch at her maternal uncle’s house and this is when the chuddo ceremony takes place by the maternal uncle. The green and yellow bangles are to be worn without breaking a single one. After this ceremony, the bride is not to do any work as it is not auspicious to break any of the bangles, as they are symbolic of her wedded life ahead.

A day prior to the wedding is the day of the ‘Ros’ ceremony in which the bride and the bridegroom are to apply ros (a mixture of coconut juice) all over their body, which is symbolic of them having left behind spinsterhood and bachelorhood. Another significant ceremony before the wedding is the Bicareanchem Jevonn which is a lunch that is in the honor of the departed family members of the home. For this, beggars are served rice and given some money.

On the day of the wedding, the bride’s wedding dress and other accessories are sent by the groom to her house by a female relative who also helps the bride to dress for the wedding. When the calcada is being sent to the bride’s home, crackers are ignited by the groom’s side to inform one and all that it is being sent. Before proceeding to the church, the close relations and friends of both the bride and groom offer their blessings, and the groom is the first one to reach the church after which the bride arrives. On the wedding day, the dowry items are sent to the groom’s home before everyone leaves for the Church.

The wedding is then followed by the reception which is full of fun and frolic with a live band, ball dance, food and drinks. Also the tradition of cutting the wedding cake takes place and a toast is raised to the new couple.

A lot of the contemporary brides in Goa prefer to wear the traditional white wedding gown that is made out of luxurious and rich fabrics like satin and silk with delicate embellishments, along with the veil. The groom also dresses in a suit that could also be a tuxedo to compliment the bride.  The overall look is very classic, with a touch of contemporary designs.