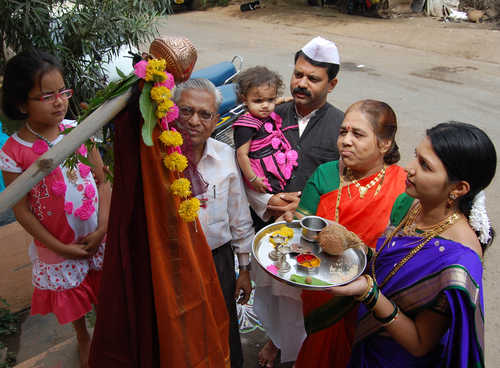 Gudi Padwa is an Indian festival that marks the beginning of the New Year and the harvest season for the people of Maharashtra. Gudi is the word used to refer to Brahma’s flag (which is hoisted on this day) while Padva is derived from the Sanskrit word Paddava or Paddavo which refers to the first day of the bright phase of the moon. This festival is celebrated on the first day of the month of Chaitra, according to the Hindu calendar, which usually falls during March-April according to the Gregorian calendar. This day is also symbolic of the season of Vasant or spring in India. Besides Maharashtra, it is also observed under different names in Andhra Pradesh, Karnataka and Tamil Nadu as well, however by a smaller community of people. 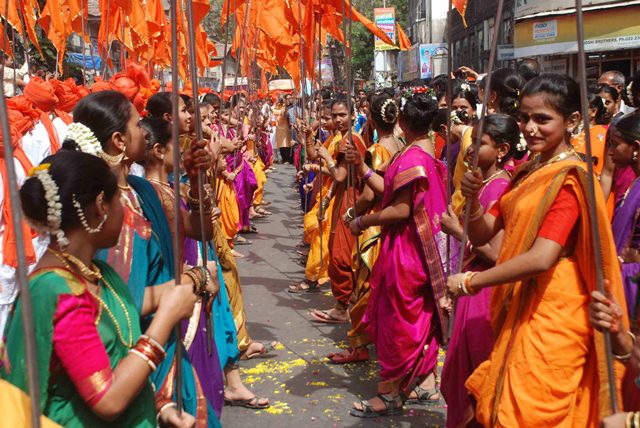 Devotees participate in a procession to celebrate Gudi Padwa, in Mumbai ( pic by Ravindra Zende kemmannu.com)

One of the sacred texts of the Hindus, the Brahma Purana states that Lord Brahma recreated the world after a raging deluge in which all time had stopped and all the people of the world, destroyed. On Gudi Padva, time restarted and from this day on, the era of truth and justice (known as Satyug) began. Therefore, Lord Brahma is worshipped on this day.

Another popular legend about the origin of this festival revolves around the return of Lord Rama to Ayodhya along with his wife Sita and his brother Laxman from exile. The ‘Brahmadhvaj’ or ‘the flag of Brahma’ (other names for the Gudi) is hoisted in memory of the coronation of Lord Rama. The Gudi is hoisted at the entrance of the household in commemoration of the Gudi that was hoisted in Ayodhya as a victory flag. It is also believed that Lord Rama was victorious over King Bali on this day, marking this occasion.

For the people of Mahrashtra, there is an added significance to this festival. It is believed that Chhattrapati Shivaji Maharaj, celebrated leader of the Maratha clan, led the troops to victory and attained freedom for the kingdom from the dominion of the Mughals in that area. The Gudi then is a symbol of victory and prosperity.

It is believed that hoisting the Gudi outside ones home wards off any evil influences, making way for good luck and prosperity. Many businessmen inaugurate their ventures on this day as it is considered an auspicious day.

Preparation of the Gudi

The Gudi is made by purchasing a bright green or yellow silken cloth with a zari brocade on it and tying it on to a long bamboo stick. On top of the cloth then, neem leaves, gathi (a Maharashtrian sweet preparation), a garland of red or yellow flowers and a twig with mango leaves are also tied. This stick with the various ornaments is topped off with an inverted silver or copper pot.  The Gudi is placed either at the gate or outside the window.

Rangoli is one of the most popular and quintessentially Indian forms of decorating the house during auspicious Hindu festivals. The ground around the Gudi is decorated with an elaborate Rangoli made by using powdered color, flowers and petals and is a much awaited ritual in the households celebrating this festival. There is no particular motif that Gudi Padva warrants in a Rangoli. Therefore, celebrants have the freedom to use a variety of motifs in whatever combination they like; right from geometric patterns, nature inspired motifs like fish, trees, elephants and birds, and human figures to more religiously significant and auspicious symbols like the kalash, swastika with the four dots, om, mangal, leaves from an Ashoka tree, a lighted lamp, the lotus and many others. The vibrant colors of the rangoli and the flowers used in its making reflect the splash of colors and life that this season brings with it. 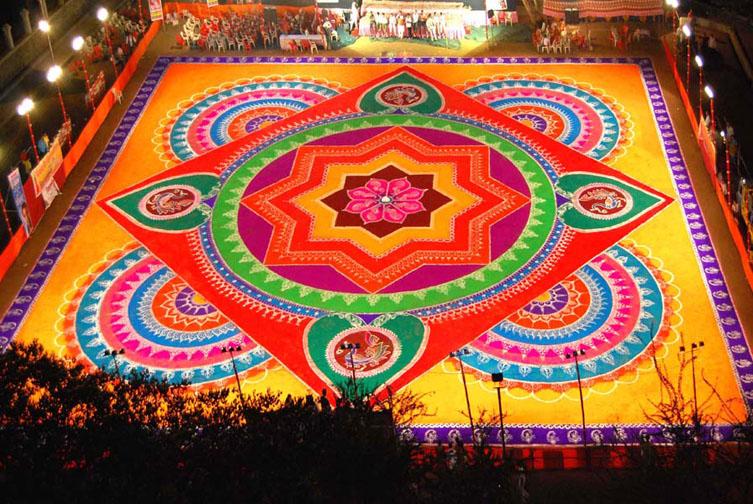 Since Gudi Padva marks the beginning of spring and the Maharashtrian New Year a thorough cleaning of the entire house as well as the courtyards is a must. Post this, they bathe in special oils and aromatics. The women and girls in the house prepare an extensive and elaborate Rangoli at the doorstep of their house as well as the area where the Gudi is to be erected.

All celebrants dress up in their best clothes for this occasion. In fact, new garments are purchased specially for the occasion of Gudi Padwa. While women may wear sarees or salwar kameez, the men wear kurta pajamas, preferably in the color white.

The hoisting of the Gudi is the most important ritual of this celebration. After it is erected, people offer prayers to Lord Brahma. The locality comes together at this point to perform a special ritual, which is the breaking of a coconut kept in the Gudi by forming a human pyramid, by only men and adolescent boys. This structure is scaled by one man or boy climbs to break the fruit.

Another unique custom that is part of the celebrations is the ingestion of Neem leaves. These can either be eaten directly or ground into a paste and used in a special preparation along with jiggery and certain seeds. The significance of this custom is to mark the commencement of the festivities.

Special food is prepared on this day including a sweet known as Shrikhand that is consumed with a type of Indian bread known as Poori. Other special dishes include Pooran Poli also known as sweet Indian flatbread, Soonth Panak and Chana.

Gudi Padwa is a festival celebrated with much fervor in the Western and Southern India and some parts of East India as well. It is known as Ugadi in Andhra Pradesh, Yugadi in Karnataka, Bihu in Assam and Poila Baisakh in West Bengal. Other communities such as the Konkanis and Sindhis observe it under the names Sanvsar Padvo and Cheti Chand, respectively.

There are certain customs too that are commonly observed such as the consumption of Neem leaves in the form of a paste in a jiggery preparation. This is specially done in Andhra Pradesh and Karnataka.

Since the main celebration of Gudi Padwa takes place in Maharashtra, the attire worn by the celebrants, especially women is very traditional to the region. The saree, which can be in a variety of bright colors, is draped in such a way that the bottom half looks more like dhoti pants than a long skirt. The sarees usually have embellishments in gold on the border while the rest of the saree is plain i.e. without any pattern. This ensemble is accessorized with a garland of mogra flowers in the hair, which is tied in a bun, along with an elaborate gold nose pin. The earrings are also in gold with a single ornamental chain pinned up with the hair.

Many men and women also tie a turban around their heads in saffron colored cotton cloth. 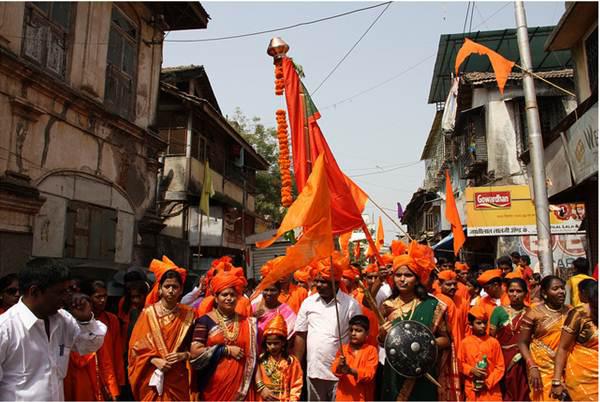