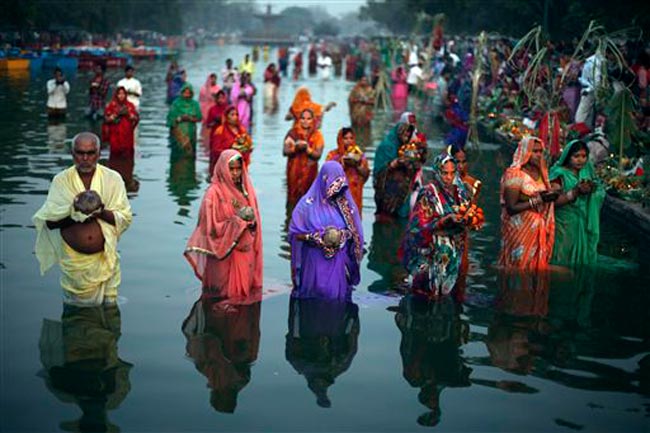 Dala Chhath – The Most Prominent Festival in Northern India

Aalso spelled as ‘Chath’ or ‘Chat’, it is commonly known is one of the most prominent festivals in Northern India. The Sun God Surya is worshipped by the Hindu communities of Bihar, Jharkhand, Northern Uttar Pradesh and the Terai region of Nepal. However, the celebration of the festival has transcended state borders and is now prominent in metro cities like Delhi and Mumbai, wherever migration is popular. The festival occurs on the sixth day (Shasthi) lunar fortnight of the month of Kartik, according to the Hindu calendar. This usually falls between October and November, per the Gregorian calendar. The festivities span over a period of four days and involve a number of purifying and appeasing rituals to the Sun God.

It is believed that Draupadi and the Pandavas performed rituals similar to the Chhath Puja in order to worship the Sun God. According to the Mahabharat where this reference is recorded, Draupadi observed this day on the advice of a sage named Dhaumya. Her worship resulted in the resolution of the Pandavas’ immediate problems as well as in the reclamation of their lost kingdom.

Among other strains of this festival’s history is one that traces the puja to Karna the son of Surya. Other beliefs say that during Vedic times rishis used the method of Chhath pooja to retain their strength without the intake of food. That is to say that they obtained their energy directly from the sun. There is another lore that dates rituals similar to that of Chhath to pre-Vedic times since the Rigveda records the worship of the sun in a manner similar to Chhath Puja.

The Rituals of Chhath

Dala Chhath is the only Hindu festival where the setting sun is worshipped as well as the rising sun. It stems from the Hindu belief that the cycle of birth starts with death. This is done in order to thank the Sun God for sustaining life on earth and all the blessings one receives from the sun.

On the first day of the festival, known as the Nahai Khai (Bathe and Eat), the celebrants take a dip in a sacred river close to home, preferably the Ganges and bring the holy water home and cook their food with it. This food is offered to the gods. The Kharna which is the second day is observed with a full-day’s fast. The fast is broken with special Chhath delicacies in the evening after a puja is performed.

The third day is known as the Sandhya Arghya or Evening Offering which is observed with a full day’s fast without water. The day is spent preparing dishes to offer to the setting sun at a clean water body in the locality. The Bihaniya Arghya or the Morning Offering is the fourth and final day of the festival where the offerings are presented to the rising sun at the local water body.

One of the most important events that take place during Dala Chhatth celebrations is the lighting of earthen lamps under an organized stack of five or twenty-four sugarcane sticks, as dictated by local norms. This event is known as Kosi and takes place on the evening of the third day as well as the morning of the fourth. 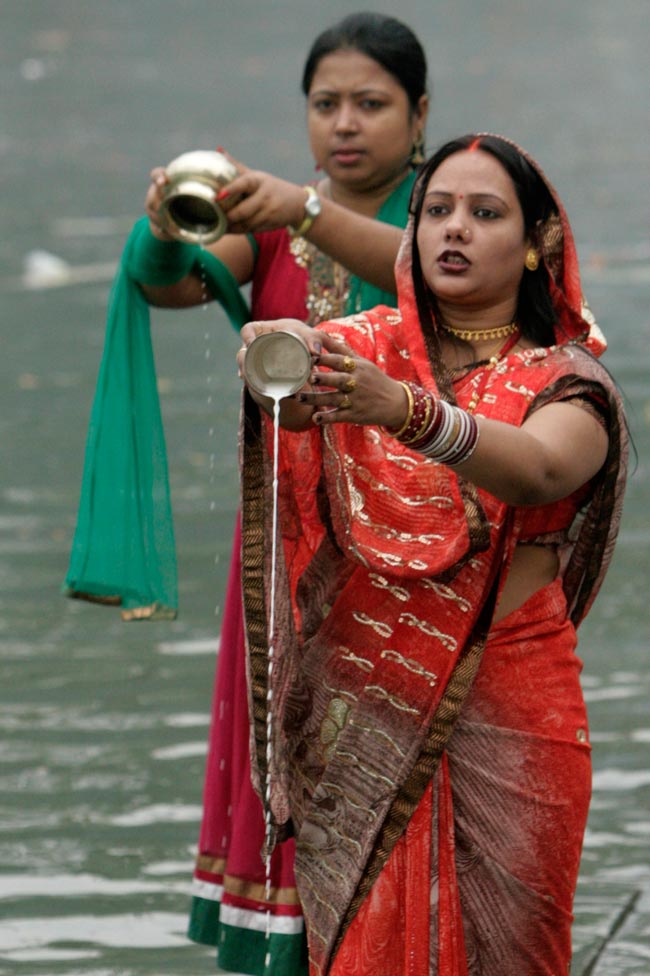 Celebrated By One And All

Dala Chhath is a communal festival wherein friends, family and neighbors of a particular neighborhood come together to fast, pray, sing folk songs and celebrate the festival with much gusto, altogether.

In the areas where the celebration of this festival is predominant, the custom was to don unstitched cloths. New clothes are customary and the Dala Chhath is considered to be a very colorful festival in all. However, if a family does not have the purchasing power to obtain new clothes, they adorn the finest they have along with jewelry to match. It is believed that the Sun God’s blessings on earth are so abundant that it needs to be respected and given back as much as humanly possible. In the evening when the womenfolk gather in small communities to sing folk songs or songs of praises of the Sun God, one can witness a variety of colors and patterns in the sarees worn by the devotees.

The sarees worn by the Vratins or female celebrants can be of any color. Although red is considered an auspicious color in the Hindu tradition, it is not compulsory for women to wear traditional costumes in this color. The importance of this celebration is reflected in the grandeur of the sarees. The borders and pallus of the sarees showcase a number of different types of crafts like sequins, cutdana, stone work and gota-patti among others. Depending on the region, women can also choose to wear silk sarees. Bangles and Mangalsutra are the most common accessories seen in the typical ensemble of a women observing Dala Chhath.

Although men are not among the primary celebrants of the Dala Chhath, in recent times they have taken up a bigger role in the observance of the rituals. Men dress in kurta pajamas or shirts and trousers, as there is no set dress code for this festival. 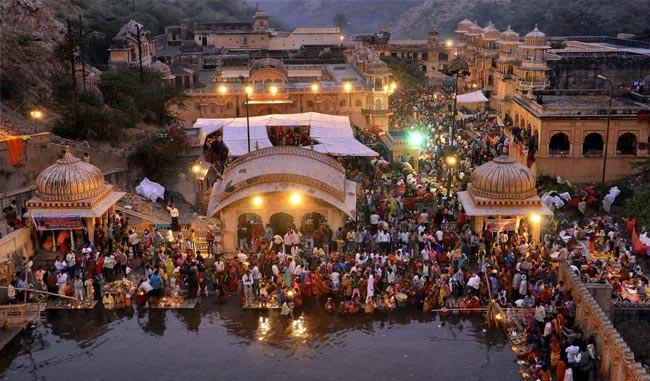 There are certain other Indian states where Chhath is of great importance. Such states include Madhya Pradesh, Chhattisgarh, West Bengal, Assam, Gujarat, Orissa and Chandigarh. People in India who speak Bhojpuri and Maithili dialects celebrate this festival.

Globally, there have been records of the sun gods being worshipped across the world. Egyptian civilization is known for its reverence of the sun and has architectural marvels that stand in support of this belief. Babylonian civilization is also said to have believed in the worship of the Sun God.

Currently, Dala Chhath is popular in some of the smaller countries across the globe where people of Indian origin are aplenty such as Jamaica, Guyana, Mauritius, Trinidad and Tobago, Fiji and Surinam.