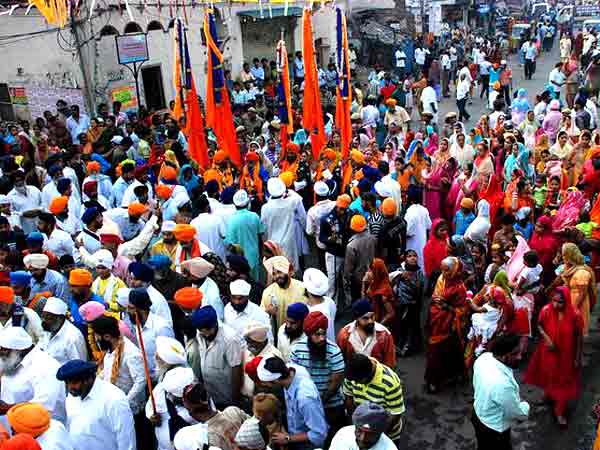 Baisakhi is named after the New Year according to the solar calendar followed in Punjab. The festival is celebrated on the first day of the first month of the solar calendar i.e. Vaisakh, that falls around mid-April according to the Gregorian calendar. As the state is largely populated by Sikhs, Hindu Punjabis too follow this calendar, although the significance of this festival is different for both of these communities. Baisakhi is celebrated with a lot of fervor and vigor. Cities, towns and villages adorn a lively look with colorful flags. On this day, special folk song and dance performances are organized.

Both Hindu and Sikh communities in Punjab have their own beliefs about the festival. On the day of Baisakhi in 1567, Guru Amar Das institutionalized the day as a day of fellowship among the Sikhs. On the same day in 1699, Guru Gobind Singh established the Khalsa Panth or the ‘Order of the Pure Ones’. With this order, he also conferred the title of Panj Pyare (or the Beloved Five), to five volunteers who were ready to sacrifice their lives for their Guru. Daya Ram (Bhai Daya Singh), Dharam Das (Bhai Dharam Singh), Himmat Rai (Bhai Himmat Singh), Mohkam Chand (Bhai Mohkam Singh) and Sahib Chand (Bhai Sahib Singh) were the first five baptized Sikhs. The significance of this lay in the fact that they formed the inner circles of the Khalsa. Khalsa Panth also eliminated caste and class differences in the Sikh community.

Also, he instated the custom of donning the five Ks (Keski – small turban used to cover the Kesh or uncut hair, Kangha – small wooden comb, Kara – steel or iron bracelet, Kacchera – undergarment and Kirpan – a short dagger) at all times. These are significant to Sikh culture as they are items that relate directly to the religion and lifestyle.

According to Hindus, it is also believed that Goddess Ganga came to earth on Baisakhi. Therefore, this day is celebrated in her honor as well where members of the Hindu community visit holy centers around the Ganges and take a sacred dip.

Baisakhi is also significant for the farmers as it officially heralds the harvest season. The fact that the year’s Rabi crops are ready to be harvested is a matter of great joy as it symbolizes that the year has ended on a joyous note. This eco-cultural significance of Baisakhi is relevant to farmers irrespective of the religion they follow.

There are two main types of celebrations that take place on Baisakhi, one pertains to the Sikh community while the other to the farming community in Punjab.

Baisakhi Celebrations by the Sikh Community

Considered a day of religious devotion, men, women and children wake up before dawn, take a bath, wear new clothes and visit the neighborhood Gurudwara where they offer special prayers. After the recital of religious songs and discourses, kada prashad (sweetened semolina) is distributed to all the devotees.

The biggest Gurudwaras in Punjab (such as the Golden Temple in Amritsar) witness the largest number of devotees on this day. The holy visit is followed by a Baisakhi procession known as Nagar Kirtan which is led by the Panj Pyares. The highlights of this procession include mock duel enactment, religious song performances and folk dance performances like Bhangra and Gidda. Towards the evening, families visit close relatives and exchange greetings and gifts.

Baisakhi Celebrations by the Farming Community

Just like the Sikh community, Baisakhi celebrations begin early in the village as well. Men and women are clad in vibrantly colored clothes and go dancing and singing towards the fields. The day sees colorful fairs where Punjab’s folk dance performances, Bhangra and Gidda are performed by men and women. Apart from the folk dance performances, bouts of wrestling and kabaddi matches are also organized. 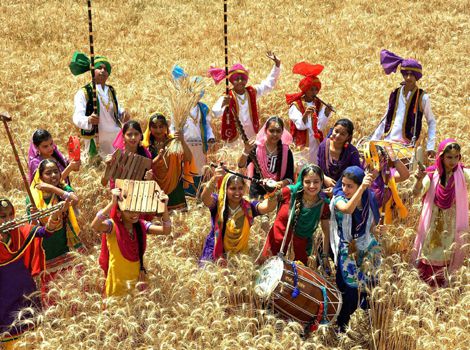 Sikh women visiting the Gurudwara wear a white salwar kameez with an orange dupatta to cover their heads. Men also follow a similar color scheme in their ensembles, the only difference being, the orange dupatta is replaced by an orange turban.

At the time of the Baisakhi procession, be it the rural areas or the Nagar Kirtan, men can be seen dressed in colorful silken kurtas paired with either pajamas or lungis while the women are dressed in either vibrantly hued lehenga cholis or salwar kameez. The festive look is completed with heavy ornaments like earrings, necklaces, bangles, maang tika and paayal . These accessories can be in gold or other forms of costume jewelry.

Bhangra is traditionally performed by men. Though the norm is to wear a white kurta with a colorful lungi, men can be seen sporting a wide array of colors. The major elements of the ensemble are Turla, Pag, Kaintha, Kurta, Lungi (or Chadar), Jugi and Rumaal.

Gidda costumes are traditionally in the form of salwar kameez . The main elements of the ensemble consists of dupatta, kameez, salwar, maang tikka, jhumka, paranda, suggi phul, raani haar, haar-hamela, baazubandh and paizabs. Alternatively, women can also opt for a lehenga choli instead of a salwar kameez. The colorful attire is complemented by heavy costume jewelry.

At the Baisakhhi Mela, besides folk songs and dance performances, number of stalls are set up. Trinkets and traditional costume jewelry, Bhangra and Gidda costumes or their individual elements, traditional salwar kameez and handicraft items such as phulkari ka kaam (phulkari work) on dupattas and other ensembles are showcased at these stalls. 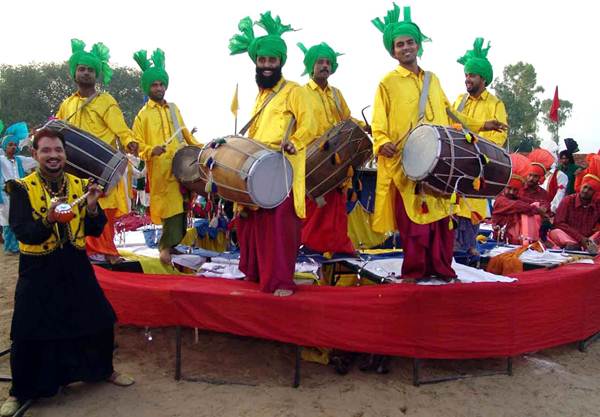 Baisakhi is a worldwide celebration considering the number of Sikhs who have immigrated to other countries. Western countries like USA, Canada, UK and Australia that have active Sikh communities celebrate the festival with a lot of fanfare and enthusiasm.

• Baisakhi is usually celebrated on the 13th or 14th of April every 36 years.
• Some believe that New Year in Punjab is spelled Vaisakhi (with a V) whereas calling it Baisakhi (with a B) alludes to its significance to the Sikhs
• Around the same time, this New Year cum harvest festival is celebrated in several Indian states under different names such as Bihu and Vishu.
• In 1875, Swami Dayanand Saraswati founded the Arya Samaj on Vaisakhi.
• Baisakhi also holds a lot of significance to Buddhists who commemorate the birth, awakening, enlightenment, and death of Gautam Buddha.
• Baisakhi has also celebrated in erstwhile West Punjab i.e. Pakistan.