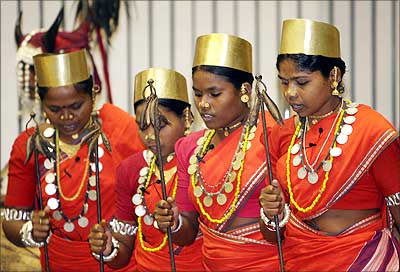 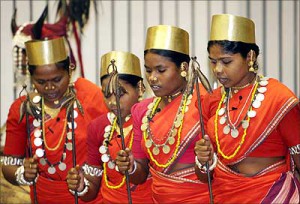 Chattisgarh, known as Dhan ka Katora (Pot of Rice), is synonymous with natural beauty and cultural richness. Chattisgarh wedding fashion includes sarees for the women and dhoti for the men. Chattisgarh is the cultural potpourri of central India. In fact, one-third of the Chattisgarh population comprises of tribal communities, the major ones being the Gond, Brinjhwar, Kanwar, Bhaina, Oraon, Bhatra, Halba, Kamar, Baiga, Kowa, Bharia, Sanwra, Kharia, Manghar, and Dhanwar.

It is the tribal communities of Chattisgarh that bestow a unique identity of dressing to the state and generate much interest among the tourists that visit here. Tribal men and women wear colorful clothing on festivals and special occasions like weddings. Use of color is a distinctive practice among these communities.

Common fabric materials like silk, cotton, and linen are used for creating dresses by means of various traditional fabric-making techniques, some intrinsic to the parent state of Madhya Pradesh and others acquired over generations from neighboring states.

Indeed, the state of Chattisgarh is known for its tribal weaving. Batik, Bandhini (tie-dye) and weaving are the most commonly practiced cloth-making techniques in this region. Such skilled weaving techniques find their way into the daily lives of the people living there.

Weddings in Chattisgarh generally take place in the months of March, April, and June, and are conducted amid elaborate rituals, customs and community celebrations.  Men and women dress up in a variety of tribal costumes that lend a vibrant atmosphere to festivities. The typical costume for men from tribal communities like the Ghotuls, Marias, Halbas, Abhuj, and Murias is a dhoti and headgear in the form of a turban. Women wear knee-length or full-length saris in bright colors. It is not uncommon to find people sporting bright headgear’s, peacock feathers, and chunky ornaments made from wood or metal.

As one moves outwards into the more urban areas of the state, wedding attires imbibe cultural influences from neighboring states. Women wear a wide range of sari materials, ranging from the ethnic Batik sari to Chanderi silk, Orissa silk and Maheshwari silk.

‘Kachhora’ is an inherent style of draping a sari, which is distinctive of a woman from Chattisgarh. Another symbolic tradition is wearing of the ‘Lugda’ sari with ‘Polkha’ blouse, supplemented with an array of ornaments. For festive dances that accompany the solemn wedding ceremony, men put on headdresses with stringed ‘cowries’ and plumes of peacock feathers. 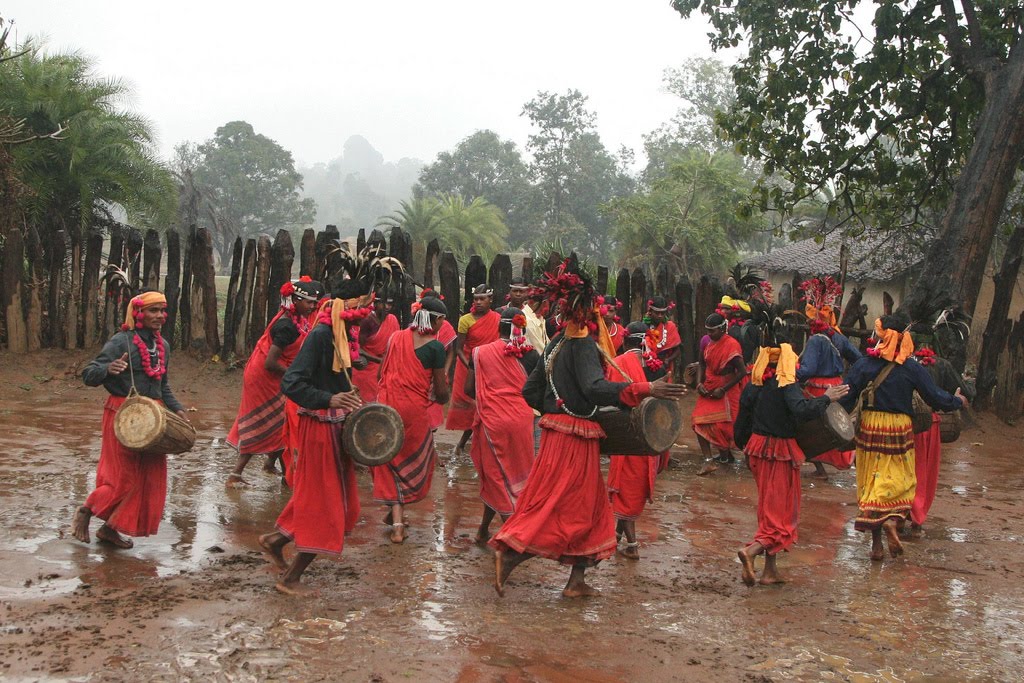 Tribal men and women adorn a wide set of ornaments for weddings and festivals. Decorative items used by women include the Baanda (necklace made of coins), a silver necklace called the Suta, a Phuli for nose, Bali and Khunti for ears, Ainthi (silver worn on forearm), Kardhini (a siver belt for the waist), a ring for the upper arm or the Pounchhi, Bicchiya for toes, and Patta or Choora bangles. Men generally wear Koundhi, which is a necklace made out of beads, and a bangle known as Kadhah during dances.

Cowries, beads, shells, feathers, and bones, are other materials that the tribal communities like to ornament themselves with.

In earlier times, women decorated themselves with garlands made from ‘one rupee’ coins. This trend is, however, now on the decline.

Most tribes follow the Ghotul system of marriage in which the unmarried boy and girl live side by side in separately made huts and are allowed to interact in various everyday activities. Marriage takes place once the couple feel that they are compatible with each other. The origin of the system is related to the goddess Lingopan.

A unique custom of Gond tribes is that the groom pays a suitable ‘bridal price’ to the father of the bride, showing his respect to the family.