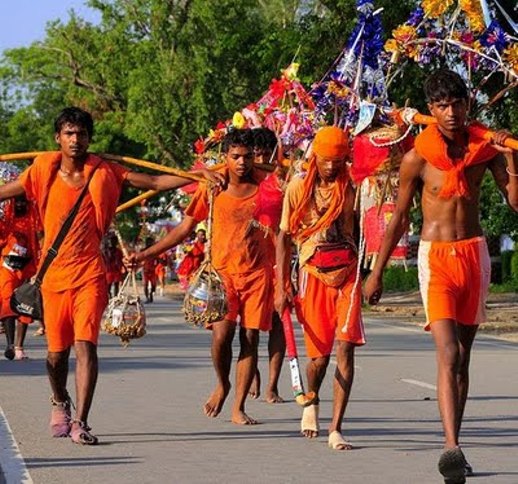 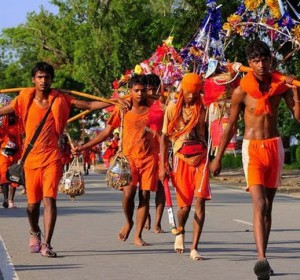 The Kanwariya Yatra is a ritual to pay obeisance to Lord Shiva by the people (largely men) of northern states of Bihar, Punjab, Rajasthan, Haryana, Uttaranchal and Uttar Pradesh. The journey is named after the Sanskrit word ‘Kanvar’ which is a single pole (usually bamboo) with two roughly equal loads dangling from both ends. This ‘yatra’ or journey takes place during the monsoon month of July-August or the ‘Shravan Maas’ of the Hindu calendar, which is supposed to be an auspicious time.  If you are in Northern India during this time of the year, then you will see a teeming population of Kanwariya pilgrims in saffron garb carrying the holy water that they have collected from either Gaumukh or Gangotri (Uttaranchal) or from the Ganges in Haridwar, returning back to their respective hometowns in order to consecrate the shiva lingams.

Kanwarya yatra, which is held annually, was not a big affair up until the 90s when only a few older devotees and saints made this pilgrimage during the Shravan maas of the Hindu calender in July-August. This yatra has been gaining a lot of significance over the last few years as the devotees have increased in numbers, and are primarily from the Northern States of India. Some devotees also come from states like Madhya Pradesh, Chhattisgarh, Jharkhand and Bihar.  In 2003, there were around 55 lakh kanwariyas that participated in the Yatra, and the numbers are increasing each year.  Kanwariya Yatra or the Kanwar Yatra is basically named after the single pole that the pilgrims carry known as the ‘kanwar’ that have two loads tied to either ends. 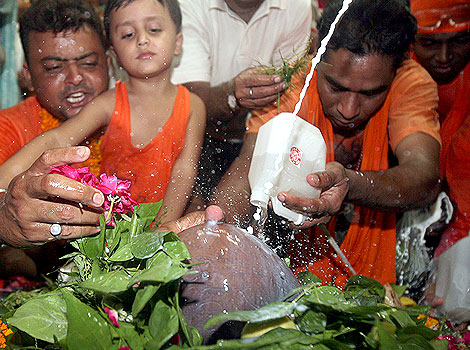 After taking a bath in the holy river Ganges, the pilgrims, Shiv Bhakts or Kanwariyas travel barefooted in Saffron garb along with a kanwar which is later used to tie the water urns.  The journey is roughly 125 kilometres and the pilgrims take different routes to reach their destination.  In fact the month of Shravan is basically dedicated to Lord Shiva.  Upon returning from their pilgrimage carrying the holy water, the pilgrims then anoint the shivalingas at their local temples and pay obeisance to Lord Shiva.

The most prominent location where these pilgrims can be seen in astounding numbers is on the Haridwar-Delhi highway which is literally choked with ‘kanwarias’ (as they are called since they carry Ganga water in the pots tied to either sides of the poles known as ‘kanwars’).  Some can be seen on foot, whilst other can be seen traveling in bullock carts, vans, trucks and bikes. The chant of ‘Har Har Mahadev’ and ‘bol bam’ can be heard reverberating in the distance as the kanwarias walk a distance that is more than 20 km. Some vehicles have speakers fitted to them that blare out various bhajans (religious songs) to which the kanwarias break into an occasional dance in order to bring out the religious fervor.

Most of the Northern states witness the steady flow of kanwarias during this season and this also brings the highways to a halt for nearly 20 days, as the saffron-clad pilgrims are given a freeway and all vehicular traffic is prohibited for their safe passage. In fact, there have been some incidents that wherein a minor traffic mishap has led to major anger outbursts and aggression from the kanwarias.

According to the tradition, the kanwar should not touch the ground before the consecration of the lingam, and therefore a lot of charitable organizations have placed special kanwar stands along the way on which the kanwarias can place their kanwars, and rest. There are a lot of voluntary organizations that have also put up medical and food stalls for the kanwarias for their well-being. However, one factor that has drawn a lot of people towards these pilgrims is their hypnotic behavior and their zeal to complete their journey despite the harsh weather, foot sores and overall discomfort which they seem to be oblivious of.

It seems that the annual tradition of the Kanwariya Yatra has acquired a new dimension recently as the number of the devotees has increased to around 60 lakhs, which therefore requires a lot of arrangement for the safe passage. It is felt that these pilgrims should be treated with the likes of those visiting Kailash Mansarovar or Amarnath. Since the number of the pilgrims is swelling each year, there needs to be a sound logistical arrangement in place to manage the numbers, which is presently being done by local citizens and volunteer organizations. 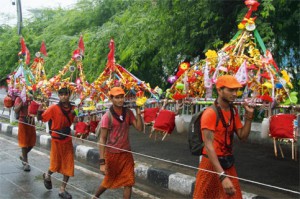 A lot of the Indian youth can be seen participating in this yatra these days. Some of these youngsters clad in trendy saffron clothes, and can be seen zooming across the highway on their bikes. Then you have the impressive ‘dak kanwarias’ who actually run all the way back- making the yatra seem like a relay race where one kanwariya completes a set distance and then hands over the kanwar to a kanwariya of the same group and so on. While one kanwariya runs, the others of his team follow him in a vehicle. However, the drawback here is that the dak kanwariyas pose the biggest traffic blockages because of their vehicles and they also display aggression.

But what truly sets these devotees apart is the bright and vibrant orange garb that they don for this occasion. The color orange is of symbolic importance in Hinduism, and it denotes spirituality and holiness of the person wearing it.