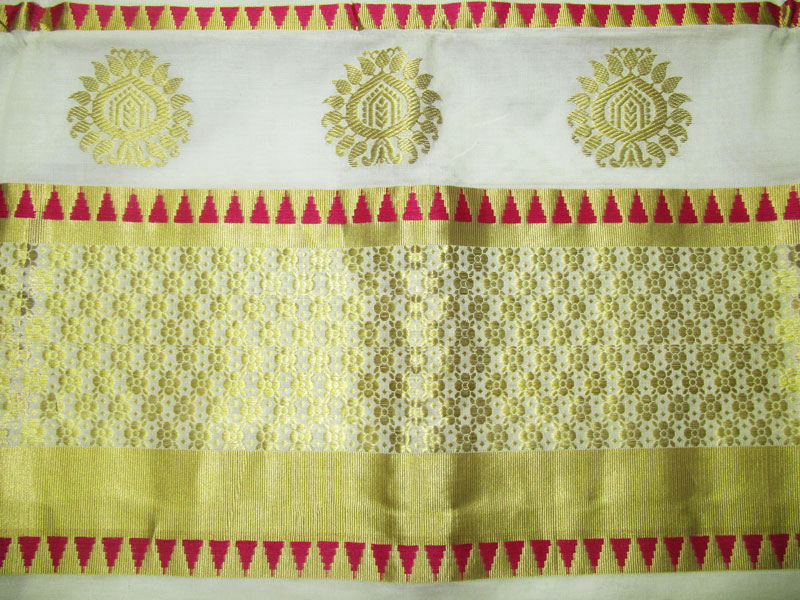 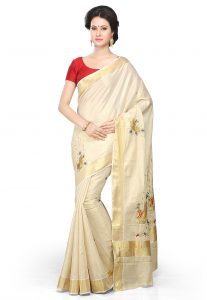 Kasavu is a handwoven cream colored saree with gold border, worn by Malayalee women. From the land of ‘God’s own country’, Kerala’s Kasavu emerges as one of the finest traditional saris which define the essence of the beauty of every woman in Kerala. It is a handloom designed material which enhances its glamor through the intrinsic borders soaked in the color of pure gold. This fabric sari is considered to be the most auspicious attire for women in Kerela, especially during their new year, as per the Hindu calendar. Also known as Kasavu, Kerela Kasavu , and Mundum Neriyathum (Nereyathum).

Kerala Kasavu which was originally known as ‘Mundum Neryathum’, traces itself way back to the Buddhist era. Slowly and gradually this ethnic fabric spread out its essence to the southern parts of India and became richly prominent in Kerala. However, the style of the fabric also finds its original essence from the Graeco-Roman culture which was known as ‘Palmyrene’.

This attire was gradually considered as a long piece of fabric which possessed a colored gold border that was displayed as a long garment and pinned onto to the left side of the shoulder. However, this attire till the 1970s was not worn as a typical sari, as the pallu was not considered as something that had to be draped as an upper garment.

Golden borders have now been replaced with different kinds and color of zaris and the work and designs which represent the traditional culture, are now crafted in the essence of Resham, 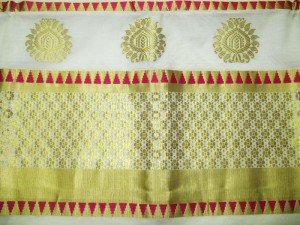 enhancing the look and glamor of the sari. Regular Kasavu blouses have now paved the way for designer blouses, which are more in sync with today’s generation and modern fashionable tastes and trends. The upper clothing of the mundu is no longer traditionally tucked inside the Kasavu blouses, since now as per the modern trends these pallus go over the left shoulder which gives the entire attire a sophisticated look.

The golden and cream threadwork crafted on this ethnic fabric are intrinsically set giving the attire a traditional appeal. The borders which are set on the pallu or on the body of the sari resemble a film reel as the borders are designed in a kerela kasavu style with the use of different colored threads, imprinting ethnic and religious motifs in multi-colored threadwork.

Faces Behind the fabric

This artwork presented on the sari symbolized and defined the personality and the cultural aspect of women who had their cultural roots deep in the soil of Kerala. The original essence of this fabric felt a noticeable presence depicted through the remarkable sketches of Painter Raja Ravi Verma. The design of this fabric also found its popularity in the mythological epics like Mahabharata which portrayed Shakuntala in many Kerala Kasavu attires.

The basic attire of Kerala Kasavu is basically categorized into two pieces of garments; one is the ‘kara’ which represents the colored bit of a design that is imprinted in the border and the second which is the ‘Mundu’ that defines the lower portion of the garment. The attire also consists of the upper garment which is known as the ‘Neriyathu’.

Kasavu embroidery has gone beyond saris by imprinting themselves onto garments like salwar kameez, trendy ‘Onakodi’ attire, which is a blend of modern and traditional look, skirts, kurtis and many more. Traditional kasavu borders have also been creatively replaced by Diamonds and check shaped motifs and designs. Golden borders have added more colors like Green and Red in them, thus enhancing the look even more.

‘Onam’, a festival that is widely celebrated in Kerala witnesses the beauty of Kasavu embroidered attires among the young and the older women especially while participating in their folk dances. Now, with the modern patterns and designs in these attires, it can be treated as a festive costume as well as an everyday outfit suiting ever occasion and season throughout the year. Traditional Copper jewelry and even pure Gold jewelry with a reddish tinge go well with this fabric.

For the first few washes always call for the dry cleaning methods, after which hand washes with gentle detergents can retain the beauty of these garments.