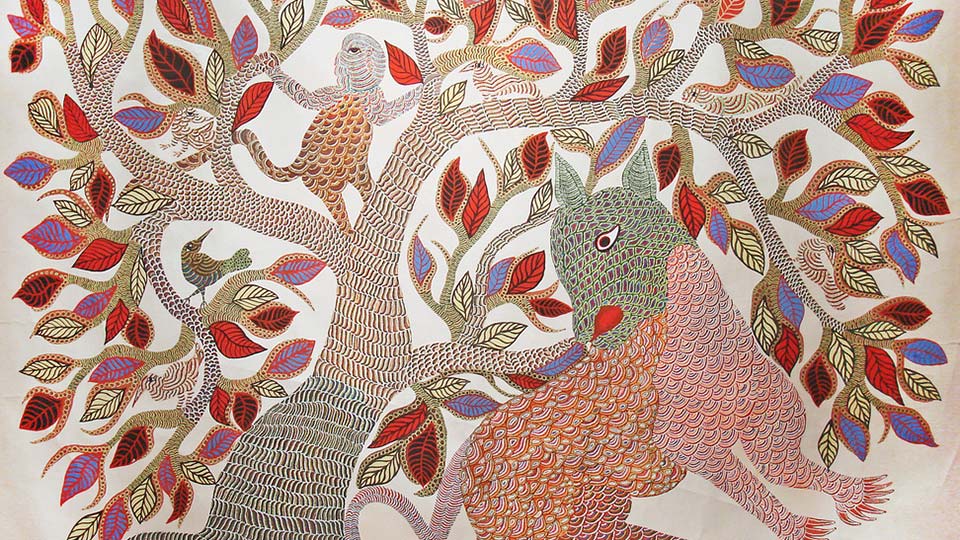 Gond paintings are a form of painting from folk and tribal art that is practiced by one of the largest tribes in India with whom it shares its name. Gond comes from the Dravidian expression, Kond which means ‘the green mountain’. While Gond paintings are considered to be from predominantly from Madhya Pradesh, it is also quite common in Andhra Pradesh, Maharashtra, Chhatisgarh and Odisha. Gond art has become so predominant that the Government of India has stepped in to preserve their art form for future generations to enjoy.

Painting in the region has been happening for a really long time as the history of the Gond people dates nearly 1400 years previously, however, the Gond people could just be imitating their ancestors as there are cave paintings in the region that go all the way back to the Mesolithic Period. Paintings, as well as other art forms, have always been quite popular with tribal people in India, especially the Gond tribe. Even amongst the Gond people, it was most prominent among the Pardhan Gonds who were renowned for their artistic skills, be it painting or music. The Gond people have a belief that viewing a good image begets good luck. This belief led the Gond people to decorate the walls as well as the floor of their houses with traditional tattoos and motifs. Gond paintings have also been used by the Gond people as a way to record their history.

According to the Gond belief system, each and everything whether it is a hill, river, rock or a tree is inhabited by a spirit and, consequently, is sacred. So the Gond people paint them as a form of respect and reverence. Gond paintings are a reflection of man’s close connection with his natural surroundings. However, while a majority of Gond paintings do take inspiration from nature, it isn’t the only source of inspiration. Gond paintings can also take inspiration from myths and legends of India or alternatively, they may also showcase images from the daily lives of the tribe. It can also showcase abstract concepts like emotions, dreams and imagination. 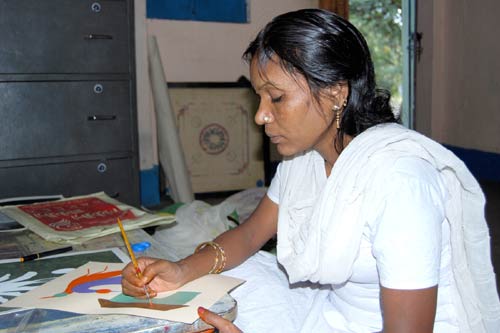 Gond paintings can best be described as ‘on line work’. The artist makes sure to draw the inner as well as outer lines with as much care as possible so that the perfection of the lines has an immediate effect on the viewer. Lines are used in such a way that it conveys a sense of movement to the still images. Dots and dashes are added to impart a greater sense of movement and increase the amount of detail.

Another very striking facet of Gond paintings has to be the use of bright vivid colours such as white, red, blue and yellow. The paints are usually derived naturally from objects such as charcoal, coloured soil, plant sap, leaves and even cow dung. More specifically, yellow from Chui mitti  which is a type of local sand, brown from Gheru mitti which is another type of sand, green is readily procured from leaves while the colour red is obtained from the Hibiscus flower. 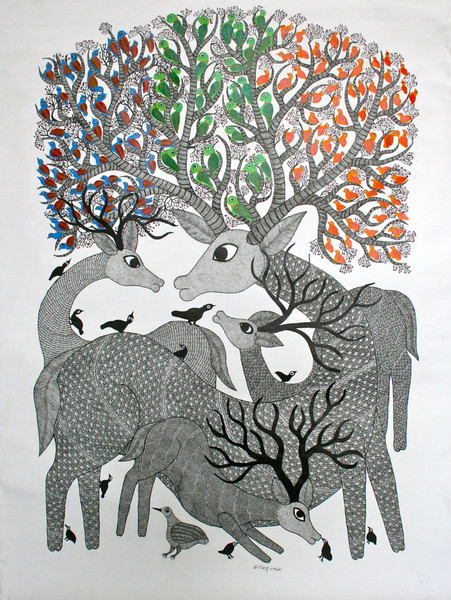 As a result of the efforts by the Indian Government to promote and showcase the beauty of tribal art, Gond paintings have become quite popular. There have been exhibitions of Gond paintings in many parts of the world, especially in Japan. Gond paintings can sell for anywhere between INR 2,000/- and INR 2,50,000/-

Modern Gond paintings aren’t painted on walls and floors and are instead painted on canvas. This makes sure that it is not only much easier to transport, carry and hang on a wall, but the use of canvas helps the paintings to stand out much more than it would if it were made on a wall. Due to the scarcity of natural colors in the current age, Gond artists have started to use poster colours. This combined with the use of canvas has made modern Gond paintings much more vivid than its traditional counter parts.