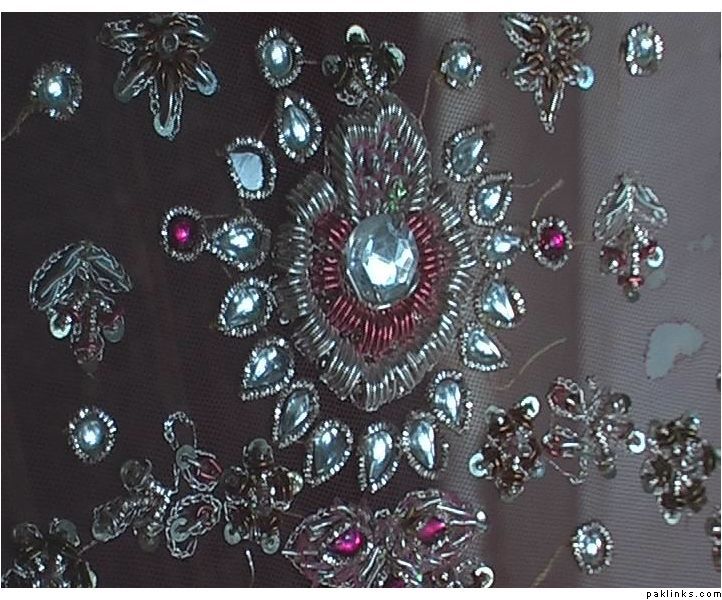 Ek Taar is a form of embroidery done on both men and women’s garments. As the name ‘Ek taar’ translates to ‘one wire’, it is the Hindi name for the embroidery and was traditionally done using a single strand of thin metal. This embroidery is usually done in sync with crystal work on the garment. Since the specialty of the embroidery is its fiber, the threadwork is on display on the garment, unlike other stitching techniques where the thread is hidden. Due to this characteristic of the stitching, it is usually used in more formal garments like bridal wear or groom wear and party wear.

Experts have not been able to trace the origin of the Ek Taar work, however, it is a well-known fact that it became popular in the Mughal era. The reason for its popularity is that only the royalty and nobility of the age could afford to get customized garments made that showcased exquisite ek taar embroidery in precious metals like gold and silver alongside crystal work. Not only was this embroidery done on apparel but was also prominently done on jooties called the Khussa as well as their gloves and headdresses or turbans.

At the end of the Mughal era and the beginning of the British rule in India, ek taar work diminished as a practiced art form. The populace largely consisted of the working class as the individual kingdoms were disbanded and made a part of the nation. Therefore the purchasing power of the populace was reduced, impacting the practice of ek taar embroidery in tandem with crystals.

Ek taar was revived once the British rule ended and the emphasis shifted to raising the status of the local artisans. This time round, ek taar work began to be associated with formal wear, especially wedding apparel.

As there is no specific source of inspiration, it is said that this work emerges as a way to display opulence by the royalty. Since the thread in ek taar is made of very fine precious metals like gold and silver, the threadwork itself was displayed and not hidden. That, coupled with the use of crystals and semi-precious stones, made ek taar a popular form of embroidery.

Ek Taar embroidery is a very fine form of threadwork, as the name suggests. It is commonly combined with crystals and other semi-precious stones like rhinestones and decorative elements like beads and sequins.

A single wire is threaded through the stone and worked delicately through the garment. Since the work is so intricate, it is done exclusively by hand. Although there have been attempts to mechanize the process, machine-produced ek taar embroidered garments are not as fine and the crystals tend to come loose from the garment.

Ek taar work is commonly seen on wedding apparel whether for the bride, groom or the party guests. It is used to decorate the lehenga, sherwani kurta as well as sarees. Turbans worn by Hindu and Sikh grooms also have ek taar work on it with crystals worked onto the piece to make it more formal and grand. However, the use of metallic threads is not as common as it was. It is more reasonable to use finer threads like resham or silk for ek taar embroidery. It does not diminish the fineness of the garment and functions in the same way as a metallic thread would. Some of the most common motifs that can be worked onto the garment in ek taar embroidery are flowers, leaves, patterned circles and vines.

Since the evolution of the work has led to the use of fabric threads for the work, it can be done on all kinds of items. In fact, ek taar work is also done using cotton thread that is thicker and denser. The use of cotton gives an impression of embossing on the fabric, making the garment or item very artsy. It is often seen on home décor items like table cloths and fashion accessories like handbags, stoles, shawls and clutches.

The versatility of ek taar work is instrumental in its widespread popularity. It can be done on all garments, therefore, its price and exclusivity is now dependent on the intricacy of work. Simplistic ek taar embroidery on a garment tends to go for a lower price as compared to more intricate work that can be seen on bridal lehengas and other formal wear.

Ek taar work on garments done along with crystals needs to be maintained with a lot of care. The garment should be soft-washed or preferably dry-cleaned. In case of washing, the garment should not be spun in the washing machine. Hand-washing is the best for delicate and intricate work in single thread.