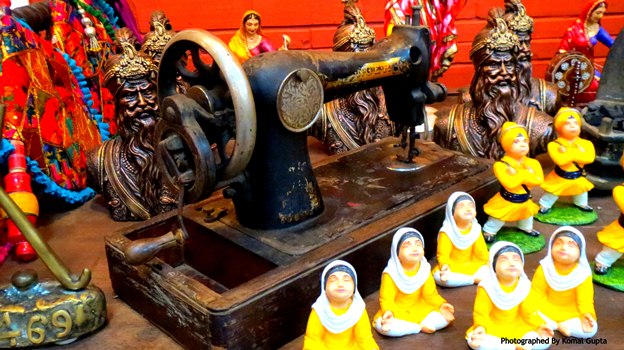 I address him naughtily as Master ji, with an inch tape and a pair of spectacles weighing almost 500 grams, hung to a dark-thick thread in his neck. He’d ask me every question twice due to his passing age and weak hearing, but will be a superhero when he had to stitch my desire into an outfit! I was charmed by his style of rolling peddle of the ‘Black’ Singer, and muttering an old

I was charmed by his style of rolling peddle of the ‘Black’ Singer, and muttering an old Kishore Da, while he narrated me his decades-long tryst with the sewing machine. Nonetheless, the rural sound of rhythmic sewing machine, decked in my grandmother’s room, unfurled rest of the memories from childhood.

Singer – In its vintage wooden & metallic frame, it has stood as nothing short of a trophy for the women of the household. From earlier having to hand-sew clothes for her family, the sewing machine was her stint with the sartorial runway, giving her the freedom to stitch and sew as she liked.

Bigger picture saw ‘Singer’ spanning, swiftly-evolving fashion panorama in India, down the decades. From the milieu of trendsetting puff sleeved blouses and A-line Kurtis flaunted by Bollywood divas in the 60’s, there was no turning back. Next, the 70’s saw college-going girls going gaga over the bell bottoms, boot-cut trousers and skin fit churidars made popular by the tinsel beauties.

The 70s’ of India barely saw Fashion Shows and the advent of the TV wasn’t yet a common sight in households, the singer machine gave the Indian homemaker just what she sought as ‘in vogue’. It allowed her to break away from the monotony of her household chores and proudly weave by her authority to create layers of a bold and beautiful woman.

A salute to the sewing machine, which brought on nothing short of a fashion revolution, right from the Indian household, to the tailor, or ‘darzi’ in the market, stitching together fashion fancies.