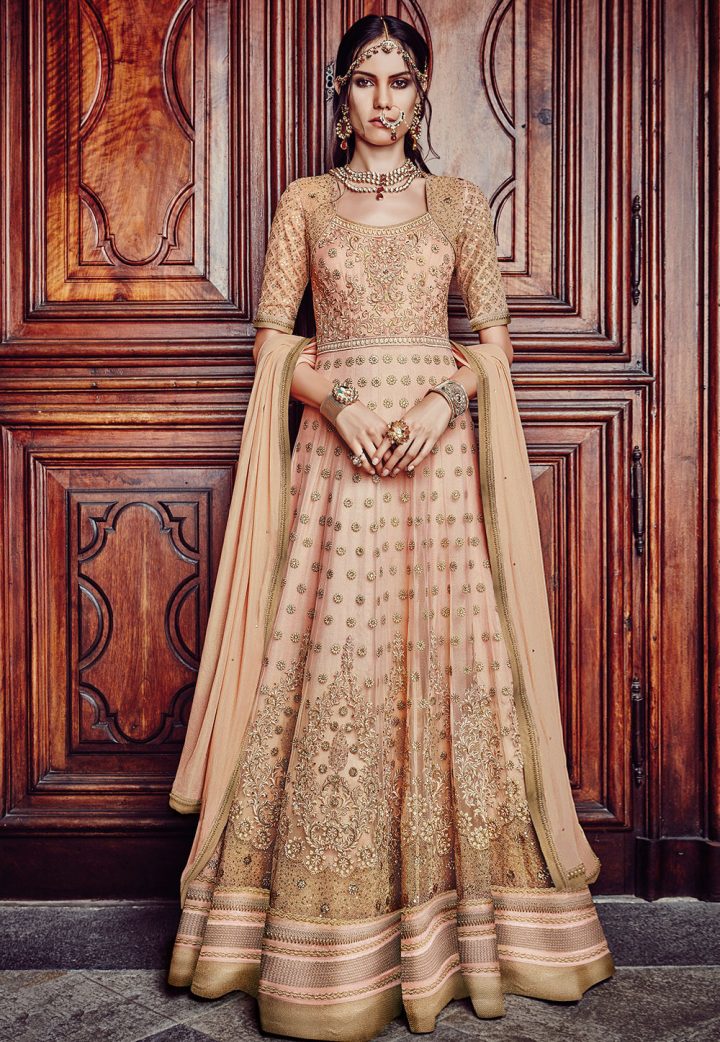 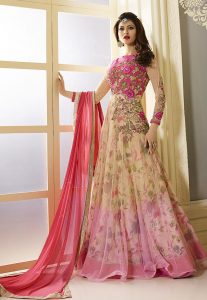 A floor length anarkali suit is a traditional form of Indian ethnic wear that is sported by women across India as well as certain South Asian countries as well. Also, known as Floor Sweeping Anarkali, this suit comprises a long, floor length kurti that is always paired with a churidar bottom. A dupatta is also draped with this outfit. The kurti of this outfit is usually quite fitted around the chest and waist and then flairs out to form a flowing skirt. These suits can be made from a variety of fabrics such as crepe, velvet, cotton silk, silk, georgette and even chiffon.

Floor length anarkalis date back to the Mughal era. This outfit was originally worn by Mughal royalty amongst both men and women. These women originally used fabrics like Katan silk to create their garments. Known for their lavish lifestyles, the royal Mughal women would only wear their outfits once and then would discard them by giving them away to their handmaids or other servants. This is how the trend started to trickle into Indian society.

There are various theories as to where the name of this suit originates from however, the most popular one is that it was worn primarily by a slave named Anarkali who came from Iran and had an affair with Prince Salim. Due to her unparalleled beauty and the grace of the attire, the suits became extremely popular and were adopted by the royal Mughal women almost instantly. They were named after her. The name translates into ‘pomegranate blossom’.

Another strain of inspiration for the floor length anarkalis lies in the fact that these garments were initially made for royalty which then permeated to the commoners. Therefore, this type of churidar kameez is made keeping festive and grand occasions in mind. Floor length anarkalis are not meant as daily wear in India.

Traces of yet another traditional garment can be seen in the floor length anarkali. The abaya, which is an outer jacket that is worn by women from the Islamic community, follows similar principles in terms of the length of the garment and its fall from the waist down. Although, floor length anarkalis can have flared skirts, those inspired by the abaya have less of a flare and flow straighter. 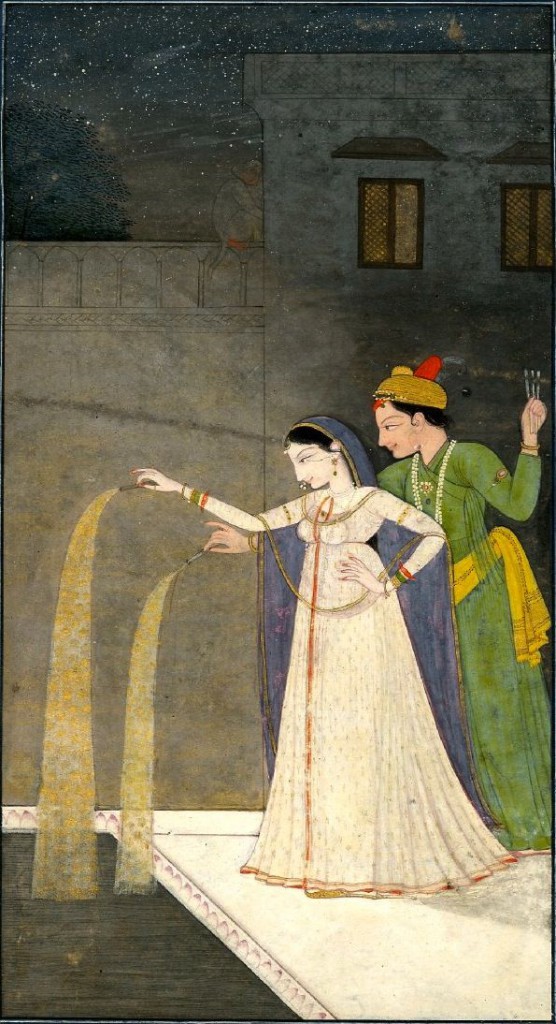 Floor length anarkalis were originally hand stitched but can also be made by using a machine. Mostly, the embroidery done on this outfit is done by either method, depending on the material or the fabric that is used to create this garment in the first place. 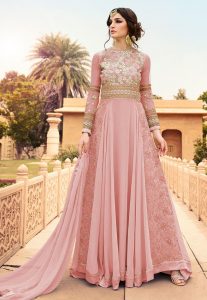 Traditional anarkalis don’t actually reach the floor; they stop a few inches higher than the ankle, allowing one to see the churridar underneath. So there are two overall looks to an anarkali that one can find in the market today, one of them being calf-length and the other floor length. 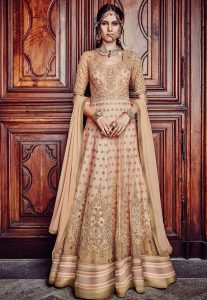 The floor length anarkali is a recent innovation of the traditional anarkali itself so the style does not have a lot of innovations on it at the moment. However, in terms of the top half of the suit, the innovations include adding western aesthetics to the top by making it either sleeveless or backless as well as abandoning the idea of the dupatta altogether.

However, the style of the floor length anarkali has been adapted into a floor length gown as opposed to a suit or a churidar kameez. This has been seen on prominent international platforms being flaunted by popular bollywood actresses.

Traditional prints and motifs have been replaced by more abstract prints and patterns to appeal to all audiences.

How to wear the attire?

Floor length anarkalis are back in fashion in India and are worn mainly to formal occasions or events as they give one an elegant and sophisticated look. This garment is widely popular mainly because it suits all sorts of body types as it is fitted at the top and flared at the bottom, which works well to conceal and highlight ones curves in a flattering way. Most women choose to wear this attire with churidar pants and a light dupatta that compliments the colors of the anarkali, however with recent trends in fashion; women also mix and match them as well.

Floor length anarkalis are best worn with high heeled shoes as they not only compliment the fall of the skirt, they also prevent the skirt from sweeping the floor.

Maintaining a floor length anarkali depends highly on the fabric that is used to make the outfit. While fabrics such as cotton, chiffon and georgette can be maintained easily and should only be dry cleaned, other fabrics such as silk require the outfit to be wrapped in a muslin cloth to prevent it from getting damaged easily.