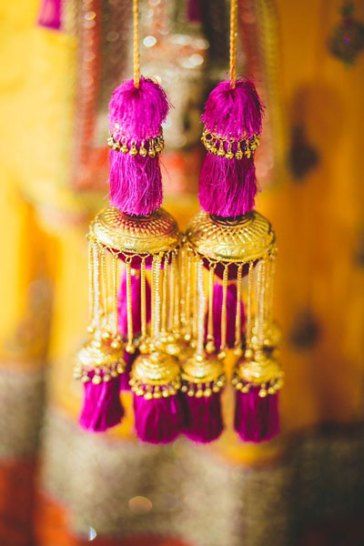 Kalira (also spelled as Kaleera or Kalire) is a silver or gold embellished, umbrella shaped ornament that is attached to the bride’s Chooda or bangle, which is a set of traditional white and red colored bangles worn on each arm. A Punjabi bride’s wedding attire is incomplete without the resplendent Kalira, or Kalirey. It is an important accessory for a Punjabi bride, and there is a separate ceremony that is allocated to the ornamentation of this particular accessory, which showcases the bride’s marital mirth and bliss felt by people around her.

According to certain archaeological evidence, Kalira first came into existence around the 20th century in Punjab. There is an interesting legend that surrounds this exquisitely designed accessory, which indicates that as per Punjabi tradition, a bride was given half-cut, dried coconuts that were tied to her bangles as a snack to keep her from getting hungry since she had to travel long distances before she reached the bridegroom’s house for the wedding ceremony.

There is no bar when it comes to different communities. The Kalira is worn by all Punjabi women on their wedding day, regardless of their social standing. The traditional kalira was made out of shells, flowers and strings of beads, which were tied around the chooda on each arm by the bride’s sisters, cousins, or sister in law. The Kalira is a symbol of good luck and prosperity bestowed on the bride by her family and friends before she enters marital bliss.

The Kalira is not just an accessory, but is an important part of a ceremony that takes place in every Punjabi wedding. The kalira ritual takes place on the morning of the wedding day, and right after the haldi ceremony. Long umbrella shaped ornaments are tied to the bride’s wrists by married women in the family, which includes her mother, sisters, sister in laws, friends and even aunts.

Certain Kalira’s are made out of gold or silver plated leaves, and it is believed that the number of leaves present on a single kalira represent the number of friends the bride has. Once the Kalirey are tied to the bride’s wrists, a whole row of bridesmaids is created that includes the single sisters or friends of the bride. The bride- to -be is then supposed to shake the kalira’s on every girl’s head. 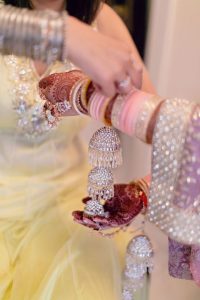 If the kalira falls on someone’s head, then that girl is supposedly the next one to get married, or so it is believed as per Punjabi tradition. This could be considered equivalent to the Christian tradition where the bride throws the bouquet after her marriage, and whoever catches it in the crowd is the next girl to be married, or is considered lucky enough to get married!

Punjabi’s and Punjabi weddings, in particular, are known for their vibrant costumes, jewelry, fashion senses, and mainly fun and frolic that they carry across their celebrations or wedding ceremonies. The Kalirey ceremony is one of the most fun going ceremonies organized by the women of the household, holding and having them participated in the rituals and customs full of entertainment and splendor.

Once the bride gets married, Groom & Bride go to the Gurudwara, or the temple to seek the priest’s blessings. During this time, the bride leaves one of the two kaliras in the gurdwara as a token of respect for the priest, and to obtain his blessings for a happy married life. The other Kalira is kept as a token of her marriage for the rest of her nuptial journey.

These days Kalirey come in all kinds of exclusive designs and trimmings. Punjabi brides love to match the style and colors of the Kalirey according to their wedding dresses and jewelry. Different colored stones, flowers, or beads are added to the kalira which go in sync with the bride’s lehenga or the shades present in her overall wedding attire. Some go for the simple looking kaliras, which are silver or gold leaves attached to strings made out of beads, while some like to go for the more ornate looking kaliras, which are large and umbrella shaped, and have lots of diamonds, and pearls embedded in the design.

All the grandeur present in Punjabi weddings make them famous not only in India, but in other countries. Several customs and traditions inherent in Punjabi weddings have been adopted by other cultures as well. Kaliras are beautiful ornaments that have captured the hearts of many on a global scale, and continue to do so even today.