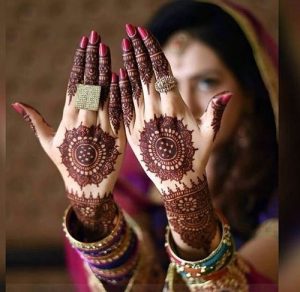 Mehendi is a temporary art form of skin decoration that is popular mainly to adorn palms of women, back of the hands and feet. It is applied from a paste of dried ground henna leaves that is bought in a cone shaped tube and made into designs. The designs may be simple like a single circular blob, or intricate geometric patterns inspired by Gothic or Arabic art. It is applied by the bride and her relatives before the wedding, and during festivities and

According to certain historical accounts, the origin of Mehendi can be traced back to pre historic times, and it is widely believed that it was introduced in India by the Mughals. The word, however, is derived from the Sanskrit word ‘Mendikha’. Another popular term for Mehndi is ‘Henna’, which is more recognized in the Western part of the world. This art of decorating the skin with a turmeric based paste is widely practiced in countries like India, Pakistan, Nepal, and Bangladesh. Initially the designs were kept simple, but as certain trends evolved, the designs became more ornate and elaborate.

It is usually applied during Hindu weddings and festivals like Karva Chauth, Diwali, Teej, and Bhai dooj. Beautiful designs are drawn on hands, feet and legs, which enhance the beauty of a woman by leaps and bounds, especially when they slip into traditional outfits like Lehengas, Saris and Salwar Kurtas. Maximum designs are drawn on the palms of the hand since there is no melanin there, and the drawn objects appear clearly. In some parts of India, even bridegrooms get their hands embellished with Mehendi as part of the wedding ceremony and rituals.

Mehndi artists are extremely skilled and take their time to make the exquisite designs as per the customer’s demands. They carry a set of printed designs from which one can choose, which is similar to getting a temporary tattoo. They then take a cone which has the readymade paste and then slowly draw the design. Once the design is made, the person has to be careful about not smudging it since it remains wet for a very long time. Once the mehendi has dried and begins to crack, it can be washed off which leaves an imprint of the design on the body. The longer the Mehndi is kept before washing, the darker the design gets due to oxidation of color. The color could be a darker or lighter shade of orange or black.

Other than being used for body art, Mehendi has medicinal properties as well. It is also used in the form of a hair dye, and is considered the most natural and harmless way of coloring hair. Arabic style of applying Mehendi has become another rage, especially for the younger generation.

It has become a phenomenal rage in the West where it is mostly seen as temporary body art. Even for people who visit India, applying Mehendi is more or less of a tradition that they cannot miss since it is beautiful and ethnic besides being fashionable. Bollywood movies have played an immense role in popularizing Mehendi through various songs and dance sequences that flaunt the use of Mehendi and exhibit its importance for a woman regardless of her marital status or age.