When headed for a holy experience at the Gurdwara, dressing appropriately is necessary. Those who belong to the Sikh community have been accustomed to obeying the rules of dress when it comes to entering the Gurdwara. Otherwise too, in Sikh community the attire is something that is taken to be a strong constituent of social and religious norms. When you prepare to enter the Gurdwara, think that you are going to meet the Gurus in person. The shrine for the Sikh people is a place for the commoners to meet divinity in person.

The first threads of the Sikh attire were woven with the Commandments of dress being established by a Sikh Guru. Moreover, all the customs of dress were not laid down at the same point of time. Guru Gobind Singh gave the Sikhs the bana, a symbol and a means of nurturing consciousness. Since then the Sikhs are required to wear full bana at the time of entering a Gurdwara. Similarly, there are other customs and obligations. For every Sikh, the spiritual life is integrated with secular life. Since every Sikh has to oblige the gurmath or principles propagated by the ten gurus, imbibing the dress code in one’s routine is not just a choice but a compulsory custom.

The five main elements of the Sikh costume can be defined as kesh, kara, kangha, kirpan, and kach. The men as well as women of Sikh community have to follow the age old custom of couture that were established by the selected ones. 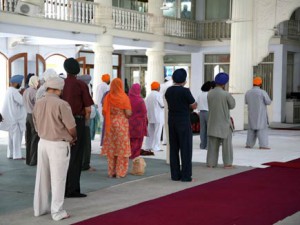 The elements of dress are only loosely defined. Despite the lack of a strict code of conduct in dress, the Sikh community has the basics well formulated. As per Sikhism, ornamental piercing is prohibited. Those who belong to this sect are also required not to shave off the hair from their body. The dress culture varies from occasion to occasion. For example, during weddings the Sikhs dress completely glamorously; however, during visiting a Gurdwara they are supposed to wear sober attire.

From the headgear, which is a handkerchief for men and a dupatta/ scarf for women to the shoes that they wear, everything has to be extremely simple and comfortable. The traditional attire that men wear to the Gurdwara comprises a loose kurta that is of full-sleeves, which is worn along with a pair of pajamas or loose trousers that are comfortable for sitting down on the carpet for prayer. While modern attire is not exactly prohibited from being worn inside a Gurdwara, it is required that the clothing is simple and sober. For example, attire like low waist jeans aren’t something that one should wear to the Gurdwara.

Earlier it was required for Sikh men to wear a turban on their head while entering the Gurdwara – a trend that has witnessed some changes during the recent times. For the women at that time, a turban that was made out of chunri was an essential part of the dress that had to be worn inside the Gurdwara. Those who do not belong to the Sikh community are supposed to cover their head with a handkerchief or a scarf. The requirement of covering one’s head is not limited to adults. Even if a baby or a kid is entering the Gurdwara, his/her head should be covered with a piece of cloth.