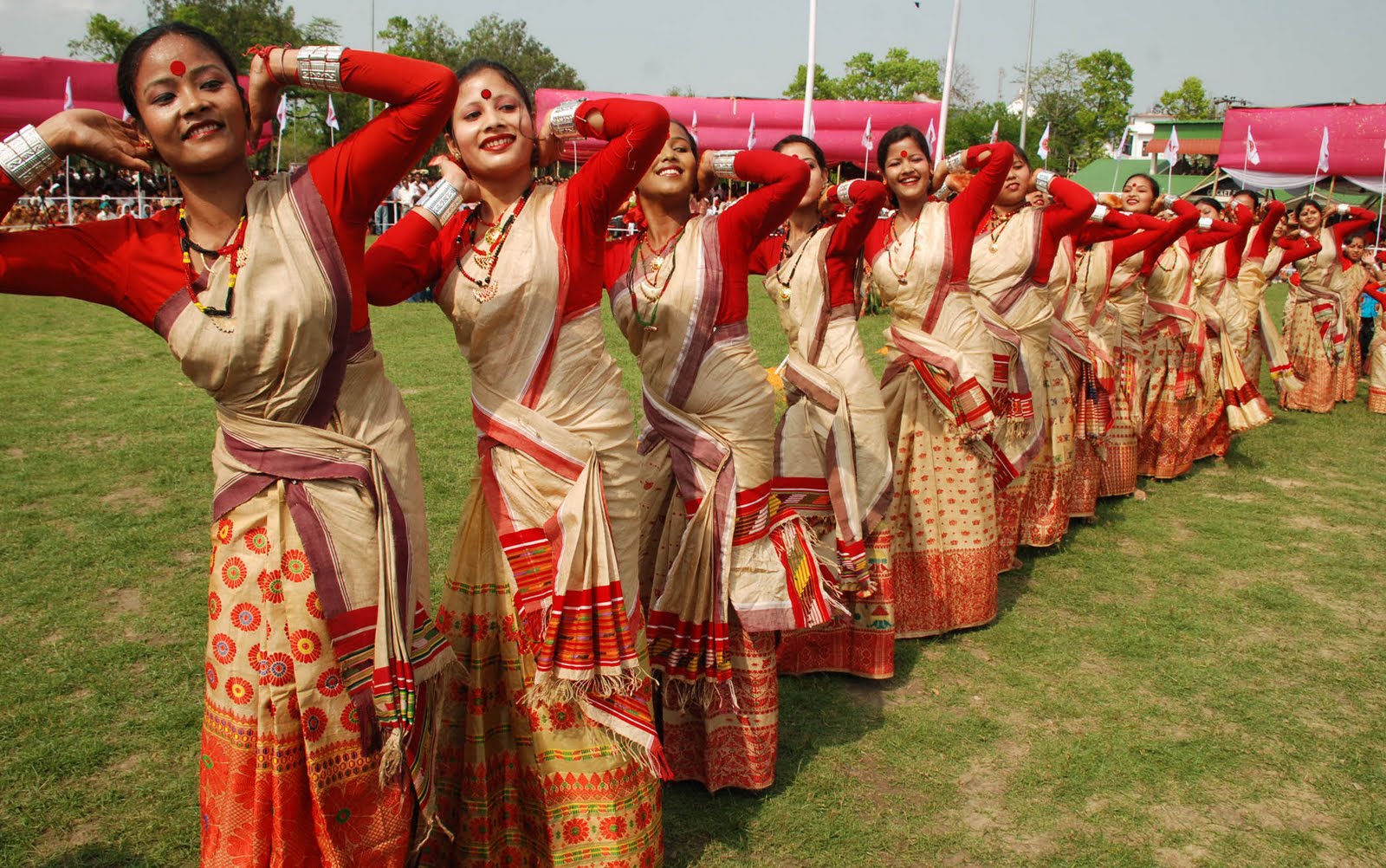 Dance forms in India know no boundaries of caste and creed as they depict oneness of the nation. They may have originated in different states of the country but all of them symbolize the joy and liveliness of a certain event. Bihu is a popular folk dance associated with the state of Assam in India and it is performed generally during the Bihu festival. There are primarily three Bihu festivals that are popular in Assam namely Rongali Bihu, Kongali Bihu and Bhogali Bihu and the Bihu dance is performed during the Rongali Bihu. 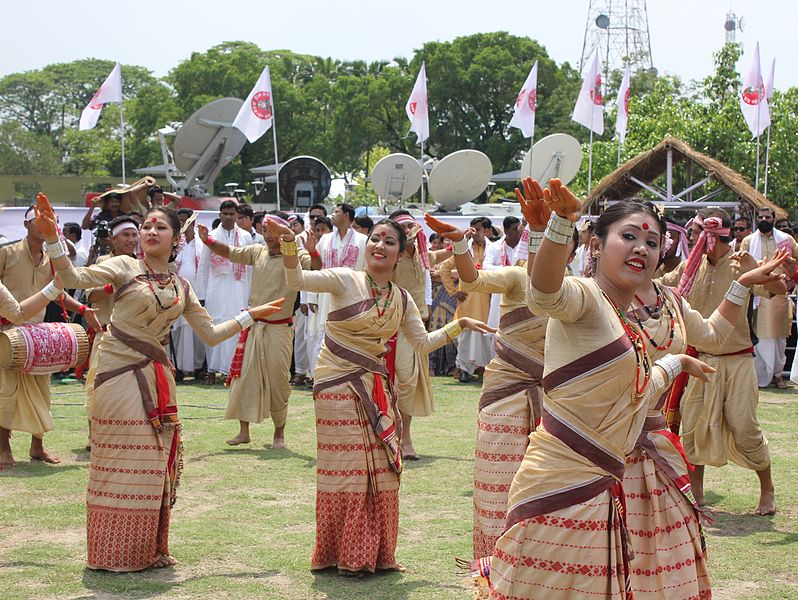 The exact details regarding the birth of Bihu dance is not known although as per the records the first ever Bihu dance was performed when Ahom King Rudra Singha invited the performers to perform Bihu in the year 1694 at Ranghar fields on the merry occasion of Rongali Bihu. Rongali Bihu is the merriest of all the Bihu festivals celebrated across the year in Assam as it marks the beginning of the spring season. This particular festival is celebrated in mid April and both men and women take part in a rhythmic celebration called Bihu. The style of Bihu dance is unique in every sense of the word. 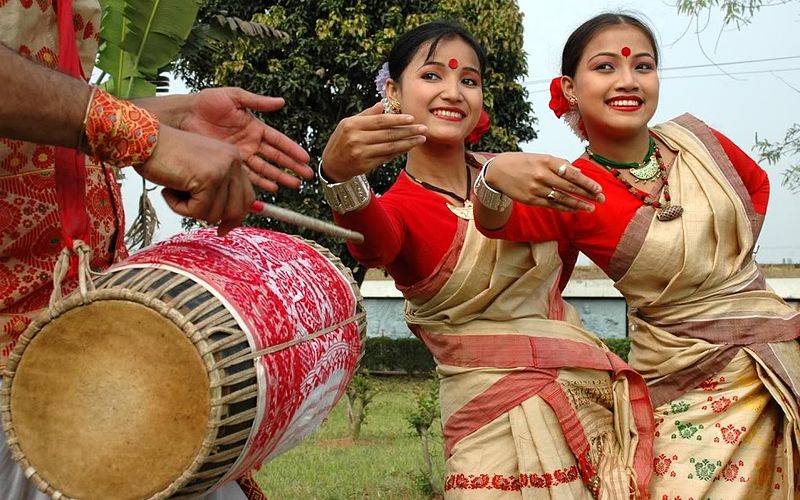 The energetic dance steps and quick hand movements define the Bihu dance of Assam. But that is not all as any folk dance is incomplete without its costume and jewelry and the performers of Bihu don the traditional Assamese attire. This dance is performed usually by the young males and females to show their joy and merriment on the arrival of spring season. A lot of vibrancy can be seen in the dance outfit of Bihu and that is what depicts the genuine spirit of this dance form.

The male performers of Bihu are dressed in dhotis and gamocha. A dhoti is primarily a long and thin piece of cloth that is worn around the waist and it covers the lower part of the male body. Gamocha on the other hand is for the head, and both the dhoti and the gamocha are bright in colors and have beautiful embroidery in different styles and patterns on the two ends. The women who perform Bihu usually don traditional Assamese attire for the performance.

They are dressed in Chador and Mekhela; Mekhela happens to be an attire that is cylindrical in shape and is worn on the lower half of the body. Chador on the other hand is like a drape which is used for covering the upper portion of the body. The women don a blouse beneath the chador and the common fabrics used for making the attire are pat silk, cotton and muga silk. Women team up their outfits with gaudy and heavy jewelry and they also decorate their braids were pretty flowers that perfectly match the color of the attire worn by them.

Music is a vital part of every folk dance and the same is the case with Bihu. There are many instruments that are utilized during a Bihu performance namely a dhol, pepa, Taal, toka, xutuli, gogona and baanhi. Not even one musical instrument can be ruled out of the list as they all play a pivotal role in producing the traditional tunes for the Bihu performance. A traditional Bihu performance is eye catching and worth cherishing as it recites the happiness and heritage of the Assamese people. 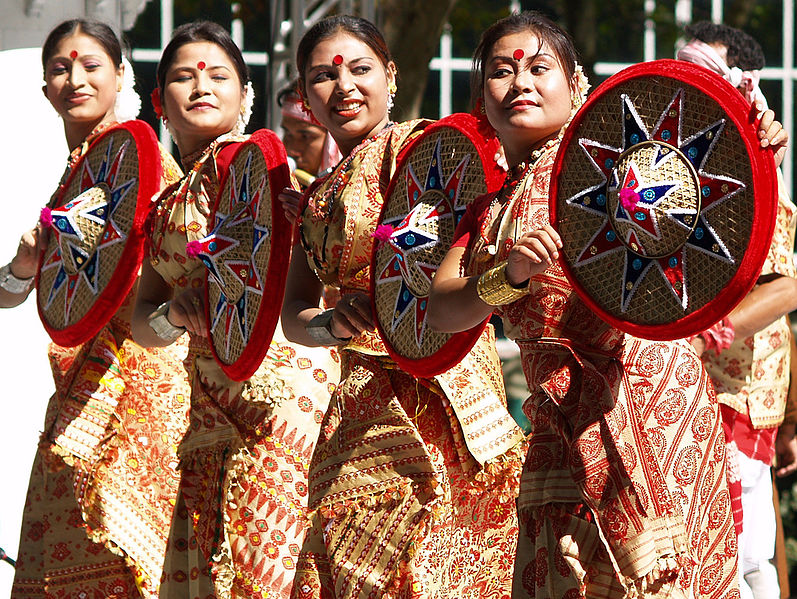 Bihu dance is well known not only in India but across the globe and one of the major reasons that have contributed to this popularity is the fact that the authenticity is still a very important part of this dance. There are no noteworthy innovations that you’ll observe in Bihu and it still welcomes the spring season with the same enthusiasm and energy.