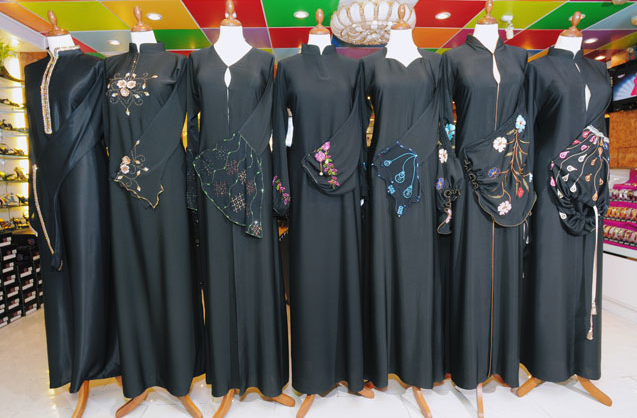 Abhaya or Abaya is a cloak or a robe that is part of the Muslim women’s culture and customs. Also referred as Aba, Abayah and Abah,  it is a loose over-garment that is meant to cover the entire body except head, face, hands and feet. The style of the garment is robe-like and is meant to preserve the modesty of women. From thereon, they have been adapted to become a high-street fashion garment that women enjoy wearing and go as far as to make it a statement of personal style. 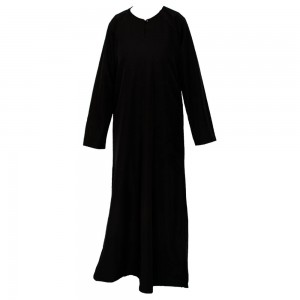 Each country has its own history as to when they became a significant part of their country’s culture and history. The origin however, can be traced to a verse in the Qur’an that states, “O Prophet, tell your wives and daughters, and the believing women, to cover themselves with a loose garment. They will thus be recognized and no harm will come to them”. This verse that inspired the Abaya intended the garment to be loose and multi-layered such that the underlying figure of the woman in indiscernible.

The conceptual background of the Abaya lies in warding off unwanted attention towards their beauty and charms by wearing the Abaya. Muslim religious texts clearly define when and in front of whom their modesty is to be protected. The culture of adorning an Abaya has become a part of the Muslim heritage.

An alternate belief about the origin states that the Bedouin tribes wore them to protect themselves from the harsh weather conditions of the desert. This was later adapted as a religious symbol worn by women.

Derived from the text of the Hadith, it is clear that traditional Abayas were plain black styled to cover the entire body. However, in recent times women have begun adorning Abayas in a variety of other colors, which is generally approved by the society as long as they don’t attract attention to themselves. Such colors include shades of grey, blue, green, black and other dark hues.

The length of the fabric that is used to make the Abaya is double the distance between one’s shoulder and the floor when both arms are stretched out at an angle of 180°. There are a number of length and breadth measurements that are taken including that between the palms when the arms are stretched out as this makes for the width of the cloth that needs to be used. Once the basic structure of the Abaya has been stitched the embellishments of the garment are stitched onto it. 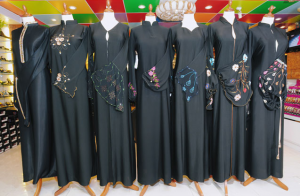 The style of the Abaya does not vary as the fundamental idea and approach to the garment remains the same, which is that of modesty. Within that paradigm however, designers have come up with cross stitch Abayas, butterfly Abayas, trench coat style Abayas and more.  Moreover, the prints and designs on the garment itself can vary from designer to designer as well as the region in which it is being worn. For instance, Kashida (Kashmiri embroidery) is a very popular design on Abayas worn in Jammu and Kashmir in India. Zardozi, as well as animal-print, are also popular embellishments on an Abaya.

Other enhancements to the Abaya include a variety of beautiful embroideries as well as embellishments such as stonework or sequin-work, laces and ribbons.

The materials in which an Abaya can be created ranges from polyester viscose to crepe, lycra, georgette, silk, chiffon and net. A popular form of stylizing this garment is to layer the black net fabric on the outside with other colorful and heavier materials on the inside.

Depending on the comfort level of the customers on the amount of stylizing that is acceptable in their family and country on their Abaya, women can choose from moderately stylized to heavily embellished Abayas. 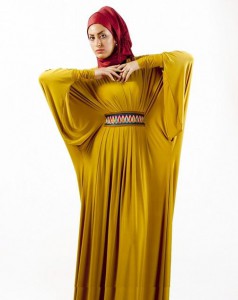 It is no longer an item that women buy off the open market. Instead the Abaya has become a fashion statement with an increasing number of designers taking note of its influence on the population.

The consumer base for different types of Abayas cannot be compartmentalized. Women who follow the tradition of wearing it on a daily basis buy different designs for different occasions. It is a fact that a woman will not wear the same Abaya to a wedding as she will to the market or to work. Therefore, the local and global fashion platforms have created varied types of Abayas that can be used according to the purpose they are worn for.

Wealthier women make it a point to follow global Abaya fashion and frequently purchase Abaya so that they have different styles for every season. 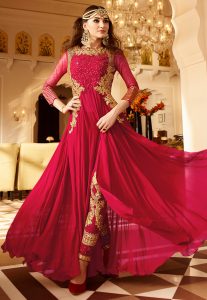 It has inspired a similar yet altogether new kind of Indian ethnic wear known as the ‘Abaya style churidar kameez’. The kameez is styled to be floor-length with full sleeves that is worn with a kind of bottom wear known as the churidar. The look of this type of women’s wear is fancy, dressy, and usually for occasions such as weddings.

The level of maintenance a particular Abaya needs will depend largely on the fabric that has been used in its making. While Abayas made of silk and those with heavy embroideries may need to be hand-washed or dry cleaned, whereas simple Abayas that are used every day can be washed in the machine.