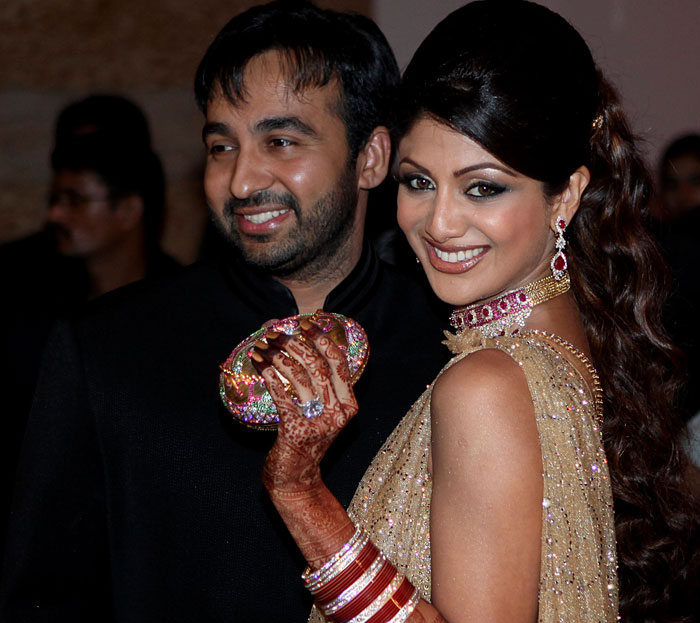 The sultry Indian actress Shilpa Shetty and her husband, the business tycoon Raj Kundra looked majestic at their wedding. Their wedding, a grand hook was nothing less than the endings we read in fairy tales, with Kundra looking as elegant as a prince while gorgeous Shilpa looked as beautiful and poised as a princess. Now, proud parents of a baby boy, they share a single life- Kundra fasts for his wife loves and adores her while she takes on the role of an Indian Bahu, a wife, and mother. 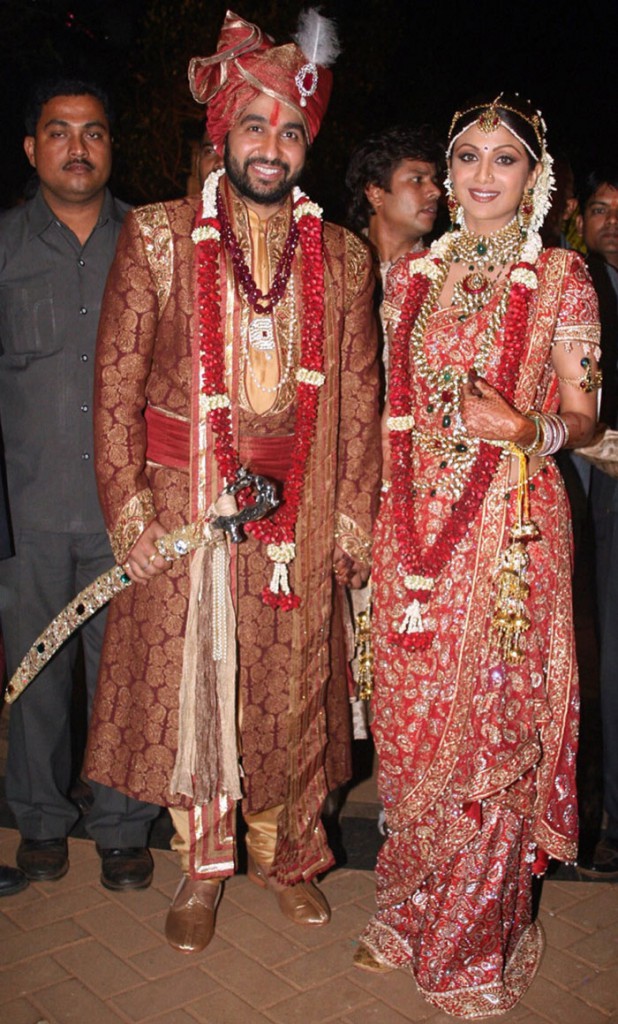 They met soon after Shilpa Shetty completed and emerged as a winner in Big Brother, a popular reality show in UK. The actress and businessman Kundra often saw each other during the launch preparations for her perfume, S2. What began as a profitable professional relationship turned into a loving personal relationship, with the couple tying the knot in a lavish ceremony on November 22nd, 2009!

On a number of occasions, Shilpa Shetty has candidly admitted that Kundra always had an affinity for her, while she initially considered him as a business friend. But over a period of time, she developed loving feelings for him. And after constant pressure from her mother to get married, she started dating him and eventually realized that he was the person who loved and respected her. At the same time, Kundra admits that she was special to him, who loved him for who he was. After a few months of dating and knowing each other, the couple announced their engagement in late October 2009, after Kundra divorced his estranged wife. 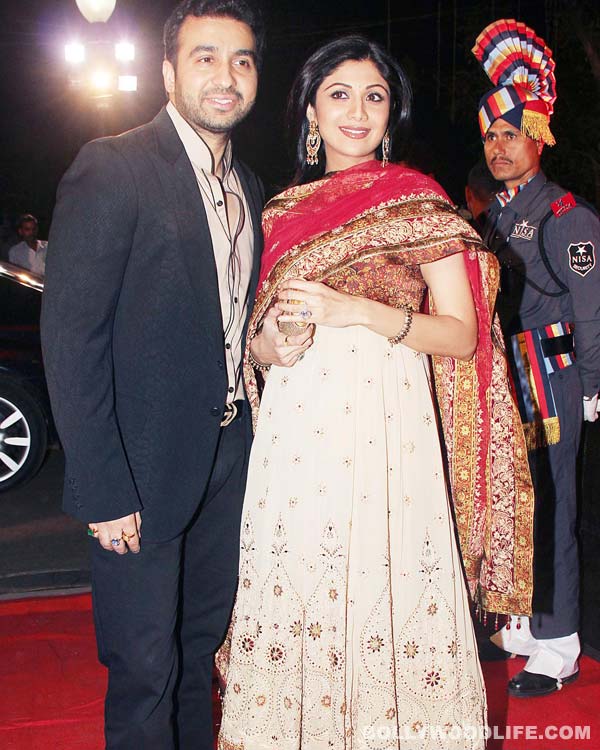 Shilpa Shetty-Raj Kundra wedding was a grand hook in every sense. From wedding theme to outfits and ceremonies, everything was straight out of a fairy tale, reminding guests and fans about the royal heritage of India. It was a Mangalore style wedding, with all ceremonies indigenous to this Southern city.  The wedding was held in Western India on November 22nd, 2009 and the ceremony was as lavish as one can imagine. The couple wore royal outfits, with bright red signifying the depth and passion in their love. The close-knit family wedding, held in Khandala was an all night celebration that served as a climax for two-day festivities, including Sangeet ceremony, where ladies dance joyously and sing songs of wedding along with a Mehendi Ceremony, wherein henna or temporary tattoo was applied on hands, arms and legs of the bride. The wedding reception was held in Grand Hyatt next day and featured intermix of variety of International cuisines at live counters.

What did they wear?

A day before the wedding, Shilpa was seen wearing a golden colored Lehenga for Sangeet and Mehendi ceremony. The Lehenga was designed in such a way that it complimented her figure and showed off her svelte curves. The marriage was performed in accordance to traditional matrilineal Bunt tradition. Therefore, the bride, Shilpa Shetty wore maroon color outfit, which is considered pivotal for Mangalore style, bunt Weddings. Instead of opting for usual Lehengas, she chose a stunning red and burgundy color sari, which matched her wheat color and complimented her height and hour glass figure. The outfit, designed by Tarun Tahilani featured the traditional ‘Mango border’ design, with mango shapes all over the sari. To give it an exquisite look, he added stunning Swarovski crystals to the sari, which appeared in a perfect contrast to her

The outfit, designed by Tarun Tahilani featured the traditional ‘Mango border’ design, with mango shapes all over the sari. To give it an exquisite look, he added stunning Swarovski crystals to the sari, which appeared in a perfect contrast to her Kundan jewelry in gold, with red and green gemstones. For adding extravagance to her ensemble, Shilpa went ahead with large loops or earrings along with a small nose ring and a tika or forehead ornament. Since the traditional style dictates that the bride has to wear white flowers or gajra on her hair, Shilpa decided to tie a bun that featured an exquisite interplay of fresh white flowers. 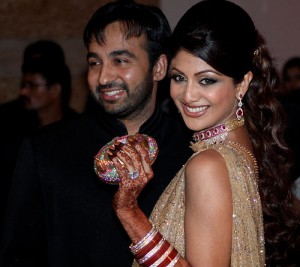 The groom complimented his bride with a maroon colored Sherwani or traditional Indian heavy kurta pajama that featured gold embroidery in a theme similar to Shilpa’s sari. The outfit designed by popular designers, Shantanu and Nikhil also featured a section where he carried a sword. A head gear or the turban in same shade was worn, because of which he looked more royal than ever. A pearl string ‘Shera’ of face mask was used to cover groom’s face before he married Shilpa. The two later had a honeymoon at the Bahamas and spent a vacation with their families on a Mediterranean Cruise.