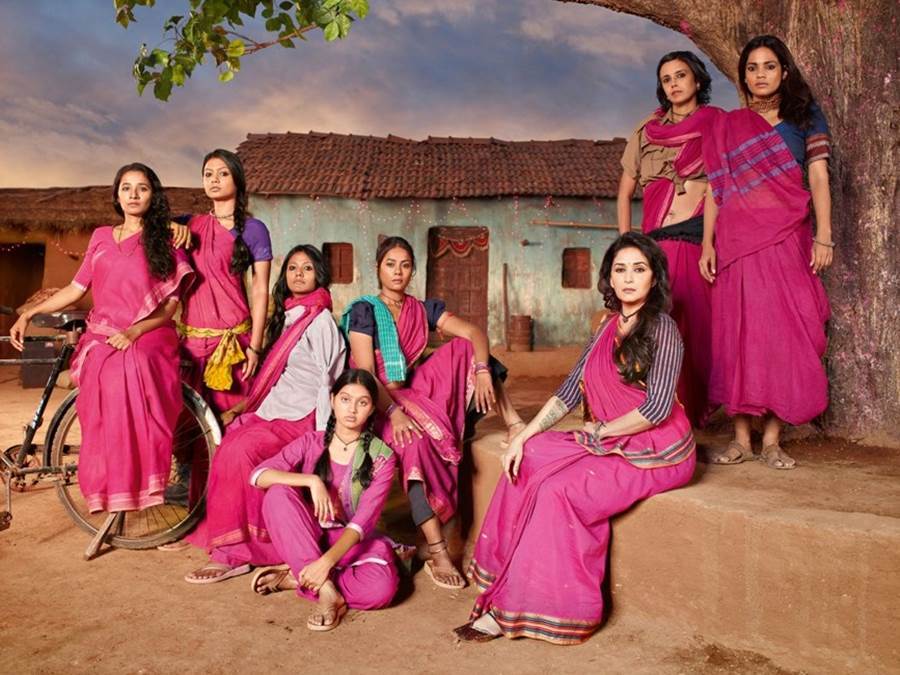 Director Soumik Sen’s upcoming movie ‘Gulaab Gang’ was released in March 2014. The film has two of Indian cinema’s most powerful and influential faces Madhuri Dixit and Juhi Chawla amongst several other actors who have lent their talent to the film.

According to Bollywood movie gurus ‘Gulaab Gang’  created a stir due to its powerful story line and the profound thought that backs up women empowerment. But what we certainly cannot fail to overlook is the vibrancy in costumes, the celebration of the color pink and the basic theme which suggests that feminity can be extremely dominant even in pink!

Gulaab Gang is as the name suggests ‘all about the color pink and a celebration of womanhood. The hot pink sari is showcased as the prime accessory that women adorn while fighting off their violent husbands and other men who oppress them and inflict them with false superiority. Both Madhuri Dixit and Juhi Chawla are seen in beautiful saris which are intrinsic with their characters in the movie. While some characters in the movie wear saris, there are some who don humble simplicity and ethnic appeal in the form of pink salwar suits and dupattas.

Juhi Chawla, who is the antagonist in the movie, wears sober Cotton saris in rich shades of orange, mustard, green, beige and gray. Her style of draping the 9 yard wonder is crisp and smart, while Madhuri’s sense of style is more fluid and has an air of a carefree spirit.

Madhuri’s blouses are quarter sleeved and have thick borders at the end which in turn match the sari’s borders as well. The draping style of the sari is Gujarati and looks extremely beautiful on Madhuri. Saris worn by both actresses are simple, yet exude a rich traditional appeal.

With cotton being the main fabric, the saris have little detailing and are adorned with a little embellishment. A mixture of thin and thick gold lines run across the saris pallu’s and give it an elegant look. 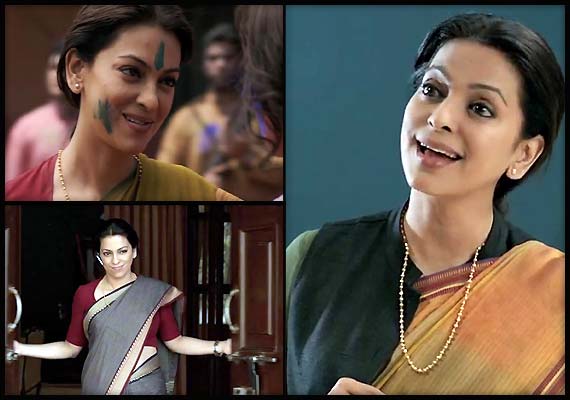 Radiant, fresh and extremely traditional are the best ways to describe the saris and costumes worn by the two actresses in Gulaab Gang. Moreover, what comes as a breath of fresh air is that feminism has been portrayed with grace in Gulaab Gang as opposed to other women-centric movies in the past which have ignored the womanly appeal and have made the women look rugged and disheveled.

Eka Lakhani who is the costume designer for the movie has skilfully designed the saris, lehengas and salwar suits worn by all the characters. Makeup has been kept to a minimal and accessories have also been done away with for the most part. Tribal jewelry with simple designs, however, have been used to adorn certain characters.

A simple kada, tabeez ( a neckpiece worn around the neck), and a strong line of kaajal to beautify the eyes with has been the basic style mantra that can be seen throughout the film. Madhuri’s name in the movie is ‘Rajjo’, and to add more appeal to the character, she has a tattoed ‘R’ in the form of a bindi, which has been inspired by the Devangiri script.

Juhi Chawla who is the clever and greedy politician wears simple gold chains, thin gold bangles, which is symbolic of female Indian politicians across the nation. Kohlapuri chappals and nagras are the traditional footwear used to add charm to the ethnic costumes. One character in the movie has been shown wearing a ‘havaldar’s khadi shirt’ with the pink sari, which adds a unique twist to how feminity can be seen.

The one thing that has made a tremendous comeback is the sari. Gulaab Gang is another fine cinematic example of where Indian ethnic fashion is headed in the next few years.

Cotton saris with bright hues such as pinks, oranges, reds, greens, yellows and purples have been making the global rounds in terms of their appeal and style. Madhuri Dixit and Juhi Chawla’s ethnic display of Cotton saris and lehengas has already started creating a major impact on the Indian fashionistas who love flaunting short lehengas with fine detailing of zari work or the humble yet stylish gold zari border.

Simple, yet chic is the current trend with Indian wear and that style is here to stay for the next several years.