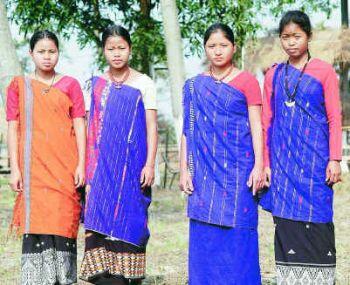 Panchi and Parhan is a traditional attire of the women of Jharkhand. The lower garment being panchi and upper, parhan. Jharkhand popularly known as, Vanachal (the land of woods) is well-cultured with a dynamic heritage of textiles and fabric. Jharkhand’s rich tribal culture has a unique and vibrant expression of taste and style. Panchi and Parhan is mainly worn by the tribes of Santhal Pargana of Jharkhand. 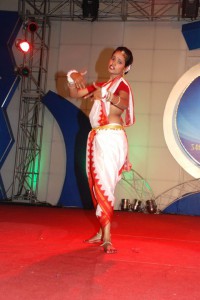 The clothing of Jharkhand draws its inspiration from the tribes that belong to the state and have been living there for generations. Some of the most prominent tribes of this region are Santhal Pargana, which dominates the way, the women dress in this region.

The basic tradition of costume goes back to a similar sari and blouse. These sarees have the traditional imprints of the tribes and are made of basic cotton fabric.The traditional costumes of the tribal women are the Panchi, a rectangular piece of cloth about 3 metres in length, which is tucked at the waist, and the Parhan, the upper garment. The prints in these costumes depict the stories of various tribal stories, culture and art.

A major chunk of the population is of the non tribal people who do not dress in the old conventional dress of cotton sari but some have adapted the same in their daily clothing such as salwar kameez, sari, etc. The costume consists of a skirt, usually ankle-length, wrapped around the waist which is the panchi and the parhan is a blouse worn above. There is a pallu-like cloth draped over one shoulder to complete the outfit. The attire is accessorized with jewelry to make it more vibrant during the religious or social festivals and events. The textiles and fabrics used for these garments have distinct prints depicting the tribal life, festivals, art and civilization of Jharkhand which adds grace and grandeur.

Women love to accessorize what they wear and go along with the changing fashion trends and market while staying true to their traditional roots. The women usually use accessories that are made of gold and silver. Sometimes the use of beads and gemstones are also seen. The ornaments are beautiful and eye-catching and the women use artistic and colorful costumes in order to bring out the traditional grace of the attire. The women also love wearing different perfumes made out of natural leaves and flowers as an important part of their accessory while dressing up for any occasion.

The traditional sari of the Jharkhand women boasted upon the rich history of their culture. Hence, to retain the same and move forward with the world, the new trends were adjusted in the design. The saris worn by the women are now seen to be made with silk and trendy textures and fabrics. The color combinations are more vibrant and the embroidery is more clear and beautiful demonstrating the tribal dances and tribal festivals. 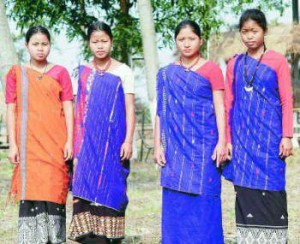 With the launch of different textiles and fabrics such as the Tussar, Anjana and Swarnarekha silks, which are now prominent names in the fashion industry, have helped develop the traditional wear to match the evolving trends of fashion.

The costume has captured the global market on a large scale. With the launch of different types of fabrics and textiles, especially of Tussar Silk, the state of Jharkhand has contributed greatly to the world of fashion and has become a hot source of inspiration for several designers as well.  The imprints of tribal art, festivals and culture are not restricted to the sari but are now seen on other kinds of modern costumes in the forms of dresses, shirts, skirts and scarves.