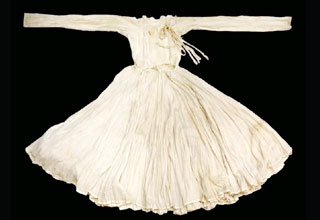 The Jama is an outer garment that was worn by Mughal royalty and was first introduced to India by the Mughals. The Jama is shaped like a tunic and has a fitted bodice with a flared skirt that starts from the waist. Two of the characteristic features of a jama are that it is long sleeved and is securely tied under the armpits. The Jama was initially a formal wear outer garment, which means that it must have been heavy on embellishments and other elements that added to the grandeur of the outfit. Although initially associated with the Muslims who came to India in the Mughal era, the jama was reinvented and modified so as to be made an acceptable outer garment for all communities in India. 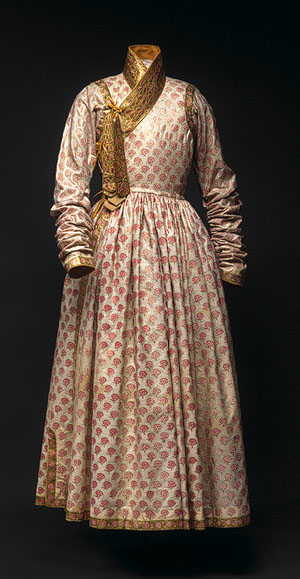 The jama, as mentioned before was brought to India by the Persians in the beginning of the 16th century as an outer garment that was worn for formal occasions. However, since most of India was invaded by the Mughals, the jama as a clothing style was not accepted by many from the indigenous Indian communities. For this very reason, Akbar, the greatest Mughal ruler, renamed several ‘Mughal’ garments and gave them names in Hindi. The jama was renamed ‘sarbgati’ meaning ‘covering the entire body’. Akbar was committed to the effort of distinguishing any antagonistic feelings between the two communities and felt that removing nomenclature with strong racial associations would be a step in the right direction. By the end of the 16th century, the jama was being made of light, translucent and delicate fabrics so as to also feature the pajama worn with them, making this the ideal ensemble for summer. However, this went out of fashion by 1610 because it was deemed unworthy for people of high birth. Only performers and entertainers preferred to wear jamas made of diaphanous fabric.

It is believed that the jama drape was popular in the three Deccan kingdoms as well i.e. Golconda, Bijapur and Ahmadnagar and the fashion there was a lot more influenced by the temperature and climate of the area. The thick outer garment brought to India was unsuitable in such harsh, hot climate and had to be adapted as such. The nobility in the Deccan wore the jama in the style of the angrakha, and among others saw the invention of the Chakdar Jama. 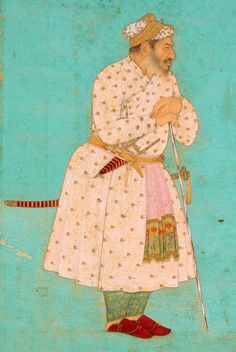 There are more than just a few defining features of a Jama:

The earliest version of the jama had a skirt that only reached mid-thigh and flared only slightly towards the end. This however changed towards the end of the 18th century where the length of the jama was till the ankles (or probably even touched the floor) and flared quite a bit right from the waist. The extension of the length to the floor and the widening of the flare of the skirt was done during the rule of Aurangzeb.

The second type of variety that was found in these garment were the directions of the ties. While Akbar was invested in making the Hindu and Muslim communities comfortable with each other, there continued to be certain subtle differences in attires that distinguished members of one community from the other. In this instance, Muslims tied the jama on their right and the Hindus on their left.

Although women in the common populace were more comfortable with the ghaghra choli, wives of high-ranking officials i.e. nobility were enchanted with the Mughal style of clothing and were eager to customize it for themselves. Therefore, women too adopted the jama with the flared skirt and fitted pants. The only addition to the ensemble was the odhni, as opposed to the stole carried by the men, because this was draped around the heads of the women.

The decoration seen on a jama was largely dependent on the ranks of the wearer. For instance, the king’s jamas would be the most elaborate and most opulent of all. That of a lower ranking officer would be a lot more toned down. This nature of this distinction is cyclic – a lower ranking officer would not have the purchasing power to buy such a grand garment and in turn his outer garment marked the disparity in class between him and his superiors leading to lower purchasing power all over again. However, many a times a special honor was granted to someone who had been of great assistance to the king and as a reward would be granted the finest clothing and jewelry.

The custom of wearing a jama has long since disappeared from the culture and customs of India. They however, are on display in a number of prominent museums in India and across the world as a statement to the world about India’s rich cultural heritage. Moreover, the jama has given way to many garments that have gone through their customary stages of evolution to give us some of the most popular formal wear one sees in India today, the Sherwani.

Nevertheless, historical events are being brought back into the mainstream textile and fashion industry of India by many renowned designers.

It is interesting to see that even in the six centuries that have gone by since the first ever introduction of the jama in India, the flavor has been retained in modern garments like the Anarkali suit for women or the Sherwani for men. However, these are the stages of innovation the original jama went through – The jama was replaced by the choga and the angrakha, both voluminous outer jackets but with ties at the side and of lengths different from the jama. Then came the chapkanm, achkan and the sherwani in the 19th and 20th centuries. These jackets were fitted all the way through and were secured with buttons rather than ties.

Paintings of Mughal royalty and that of their courts show that jamas were worn along with turbans that were reminiscent of Persia and Turkey. The styling and adornment on the turban itself was dependent on the stature of the wearer. Around the neck was at least a string of pearls or some form of jewelry. The jama was paired with fitted pants at all times along with a sash tied at the waist.