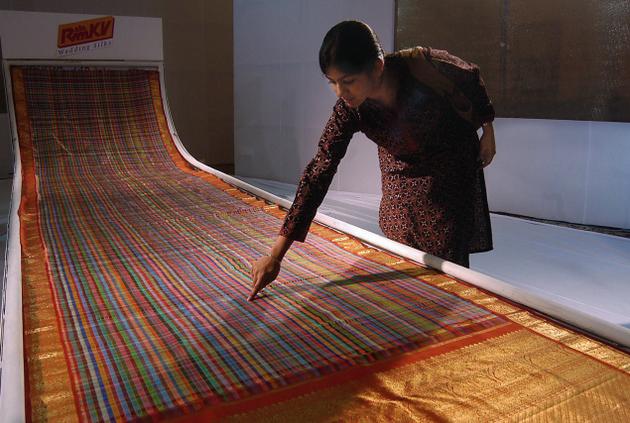 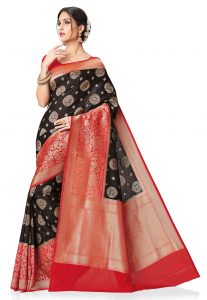 Kanchipuram (also spelled as Conjeevaram, Kanjeevarum, Kanjiwaram, Kanjivaram) is traditionally woven silk from the village called Kanchipuram in Tamil Nadu, India. For years now, Kanchipuram silk sarees have dominated the world of South Indian sarees. Synonymous with the sarees of South India, these are the mark of culture for every south Indian wedding, ceremony or occasion. The shine and durability of the fabric have made these Sarees popular attire among women across the globe. The rich quality combined with an amazing finish make them last longer.

Synonymous with the sarees of South India, these are the mark of culture for every south Indian wedding, ceremony or occasion. The shine and durability of the fabric have made these Sarees popular attire among women across the globe. The rich quality combined with an amazing finish make them last longer.

A famous king of the Chola dynasty ruled Kanchipuram between the years 985 and 1014, who took an initiative of silk trade. It was during the reign of Krishna-Deva Raya, when the famous weaving communities of Andhra Pradesh, the Devangas and Saligars, migrated to Kanchipuram. Thus, occurred the historical migration of the entire silk industry in the 15th century, to this city.

The two weaving communities were exclusively acknowledged for their skills at weaving silk. The weaving industry was temporarily halted during the French invasion in the 17th century. It rejuvenated and revamped its style in the 18th century. Today, it ranks among the most popular silks in the world. Very few stand out in the competition against Kanchipuram silks. The British translated the Kanchipuram silks to Conjeevaram silks, also known as Kanjeevarum silks.

Evolution & People Behind the Art

This fabric is an inherent part of several traditional and religious ceremonies. Kanchipuram silks have created the main occupation for several in the city of Kanchipuram. The silk bears the images of all the scriptures embossed on the walls of the temples of the Kanchipuram village.

Over decades, Kanchipuram silk has been evolving in terms of design and pattern but hasn’t lost its charm. Initially sold across the world by only merchants, today the real weavers have woken up to their own cooperative societies to sell their woven Kanchipuram silk. 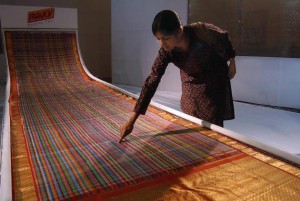 The silk that is obtained from the sericulture of the mulberry worm is finely converted to produce the Kanjeevaram silk. These hand woven sarees hold their charm in the double warp and double wept, and are known for the 1.2 inches of the warp frame that can hold up to about 60 holes through which would be woven the 240 warp threads.

Around 250-300 threads would be woven into the wept. This eventually allows the saree to remain sturdy.  Generally, the zari used in a Kanjeevaram silk saree would be in gold and silver with silver running in first, coated with gold later.

The sarees woven hence from this silk are mostly hand woven to design the best collection. The famous weavers of the city of Kanchipuram have developed the art of converting this fabric into beautifully designed sarees. The designs are inspired by the scriptures and art of the temples in Kanchipuram. 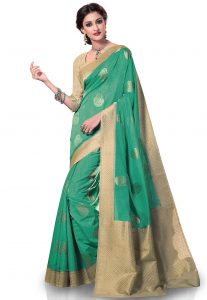 Kanchipuram silk initially started with the 9-yard sarees that were woven to blend well with the culture of designing and patterning temple stories. Over a period of time, these sarees were converted to 6 yards with gold zari weaving. To make it available for every budget, these days there are Kanchipuram silk sarees woven in artificial gold zari, without loosing upon the shining glory of this textile.

The saree has evolved in terms of textures and shapes have taken over the scriptures and art of the silk sarees. Each texture and desi have a name allotted to it with which it is best known. Thandavalam is one such patterned saree where parallel lines describe the saree.

Being the lustrous silk, Kanchipuram has got the charm of Wedding, Cermony or any other festival. Since, silk is a thick weave, it is more suitable for cold climatic conditions.

Accessorizing with the traditional gold jewelry is the trend followed.

Dry cleaning is the preferred method. One should keep them outside plastic bags in a nicely folded state. One can use some pre-washing techniques as well.