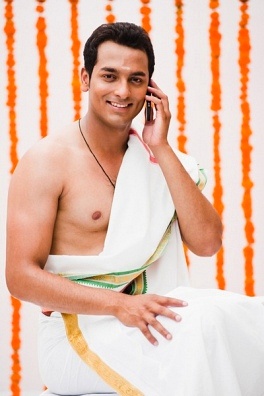 Angavastram or Thundu is traditionally a white piece of cloth or stole, worn by men from the Hindu community, which is draped over the shoulders. It is a long rectangular cloth meant to cover the torso. This piece of clothing is generally worn with the South Indian dhoti or veshti especially among the Brahmins and their temple priests. The angavastram is not just an accessory in South India as this garment has a series of practical uses as well. For instance, farmers tend to wear an angavastram to use as a towel while farming. This piece of clothing is also worn by Hare Krishna devotees and at times by Mangalorean and Bengali grooms as well as the maternal uncle of the bride in states like Karnataka.

According to the PanchrataPradipa, which is one of the numerous sacred texts that are prevalent in South India, a loyal devotee should not wear any piece of clothing that is dirty while worshipping the deity. This meant that no matter what a person was wearing, it had to remain clean as long as the person called himself a true devotee of the deity. However, practically speaking, this posed a problem as while cooking, sleeping and in other day to day activities, the garments worn by the devotee had a tendency to get dirty. As a solution to this problem, the angavastram was devised. This cloth, draped over one shoulder, serves as a napkin or handkerchief of sorts so that devotees can clean their hands on this garment and then discard them to one side immediately, before beginning their rituals and prayers.

Due to the fact that devotees are not allowed to wear brightly-colored cloth while worshipping their deities, the angavastram is usually a plain white stole or a cream colored stole. The angavastram is usually purchased along with the dhoti i.e. they are sold as a set. An angavastram can have a single strip or two stripes of color or even gold zari along the border. Apart from this, no motif or pattern is allowed to be depicted on this garment as it is seen as a mode of defiance towards religion. It should be noted that the dhoti itself is also plain white or cream colored and may have a single strip of color or zari on the border as well.

An angavastram was initially a handspun cotton yarn that was made with simplistic machinery. However, since the commercialization of the cloth industry and the vast demand of this accessory, it is made in factories. More often than not for common folk, cotton is predominantly preferred as the fabric of choice for an angavastram. However, silk is also used at times. When worn by religious men or men working in a religious leader’s capacity, the angavastram is made of silk only. The preferred material in this case is raw matka silk. The use of any form of wool is absolutely forbidden. Similarly, any form of synthetic cloth is also forbidden while one is worshipping the deity.

An angavastram, as an accessory to the dhoti, is meant to be plain white or cream colored. The variations depend solely on the basis of the colors used on the borders which, in turn, depend solely on the colors used on the dhoti itself. The entire ensemble, including the veshti and the kurta are meant to be plain white or ivory. This is why there are extremely limited styles and variety when it comes to this accessory.

As a completely different religious sect, the Hare Krishna devotees sport angavastrams in the saffron color that may have the Om symbol or the Swastika with four dots on it.

As the angavastram is considered a religious accessory, it is frowned upon for designers to experiment with the overall look of the stole or angavastram.

In the olden times, angavastram were worn by all Tamil Brahmins as a sign of their devotion to God. However, recently, the angavastram, along with the veshti and kurta that comes with it, are worn most often by either religious leaders, religious practitioners or even by those belonging to poorer families.

In terms of Hare Krishna leaders and followers, the angavastram as well as the veshti that accompanies it has been widely popularized. Followers of Lord Krishnas, or the Hare Krishnas, from all across the globe are seen wearing this outfit as a symbol of their devotion to the god. On a fashion spectrum, this garment is not tampered with. 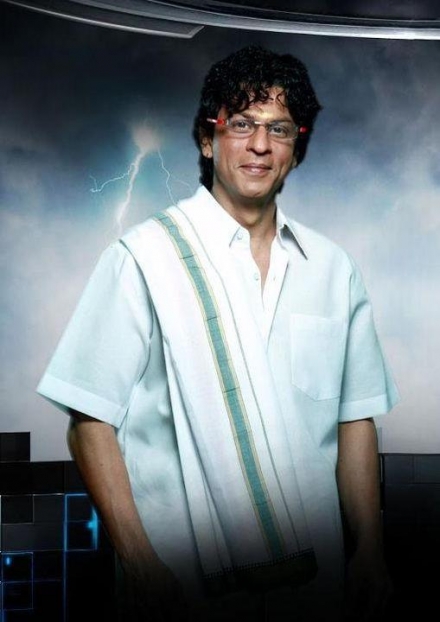 The recent innovations of this garment are extremely limited. However, of late angavastrams have been designed and made available in colors matching the dhoti stripes. This means that instead of a plain white angavastram, people now have the option to wear a colored one such as an orange angavastram. Nevertheless, it is still preferred that the angavastrams be in warm colors that are a reflection of the Hindu religions, such as saffron.

This garment is also worn on festive or religious occasions by urban Tamilians, which is why the recent innovations have taken place while designing this accessory. However, these innovations are limited strictly to the color of the garment and embroidery or any other type of work is avoided as of now.

Once the dhoti with the kurta has been worn, the angavastram is added to the ensemble to complete the look. This stole is essentially starched, folded, ironed and then draped across one shoulder. It has been designed to be worn in warm, tropical climates and can act as a stole in winter however, that is not the purpose it was designed for. Geographically speaking, it can be worn anywhere. 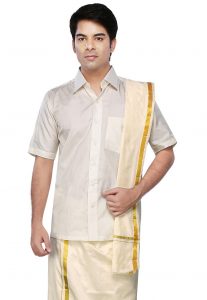 During Mangalorean weddings, the grooms use the angavastram as the sole garment for their upper body. The cloth is bunched loosely and draped around both shoulders, covering as much of the chest as possible. Bengali grooms on the other hand, wear the angavastram over the kurta. It is not bunched but is draped around both shoulders like a shawl or a blanket, but hung loosely on the front.

Most Tamil Brahmins tend to pair this garment with gold jewelry as accessories however, the overall look is highly minimalistic. When worn by religious followers or leaders, accessories are avoided as they are a sign of one’s attachment to the physical world, which is essentially frowned upon.

One can maintain a silk angavastram by dry cleaning it and avoiding hand washing or machine washing at any cost. A cotton angavastram can be maintained easily by hand washing it in starched water (which is how it is traditionally done). However, modern day users, also wash it in the machine and keep it well ironed and folded in perfect rectangular proportions at all times.