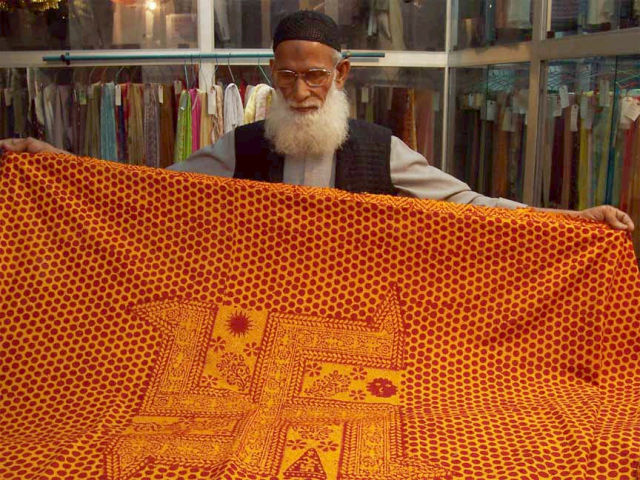 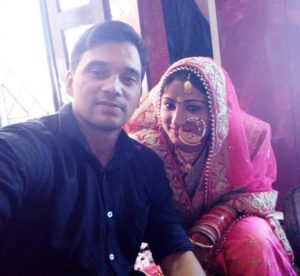 Uttarakhand is predominantly covered by rolling hills and mountains with the Himalayas towards the North and the Garhwali and the Kumaoni ethnic communities which make up for the cultural richness of the region. Since they reside in the mountains and hills, therefore, their attire is also developed out of the climatic conditions and is therefore reasonably warm.

Kumaoni or Garhwali weddings of the ethnic communities in Uttarakhand are very simple, although the various rites and rituals before, during and after the wedding are quite intricate. The traditional bride dons the typical Ghaghra-Pichora. The Pichora is perhaps the only part of the entire bridal attire that looks completely different and is a rich legacy that is passed on throughout generations. The Pichora has utmost importance in a Uttarakhand wedding and is akin to what a khara dupatta means to a Hyderabadi bride. 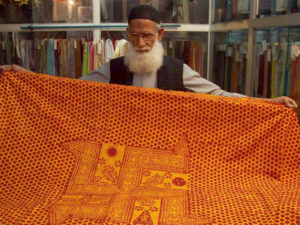 The Pichora is traditionally hand-made as is dyed with vegetable colors after which it is printed by hand; however, a lot of machine-made duplicate pichoras are invading the market. There are only two colors that are used in the Pichora – red and saffron. They are considered auspicious colors in Indian culture. The red color stands for energy and conjugal life, while the saffron represents all the holy and worldly elements. The combination of these two colors brings in good luck to the bride for her married life ahead.

The traditional Kumaoni or Garhwali bride would wear the traditional ‘Ghagri’ which is the skirt-like garment just like the ghaghra along with a ‘choli’ (the blouse) and the traditional ‘Pichora’ which is also called ‘Rangwali’ and is a traditional ‘odhni’ or veil that is embellished with silver and gold tatting’s. However, apart from donning the ghagri-pichora, the more conventional Uttarakhand bride prefers wearing a saree.

Although the Pichora is rather a humble piece of garment, yet the appearance of the garment resonates celebration. The Pichora is draped over the sari and has a saffron base which is embellished with red polka dots that are concentrated near the ‘swastika’ which is artistically made by using traditional motifs like the moon, bells, sun and conch shells. The borders of the Pichora are adorned with paisley or floral patterns and these days, a lot of additional embellishments like zari work, trimmings, beads, sequins and various ornamentation are also done to the Pichora to make it look like an exclusive garment. 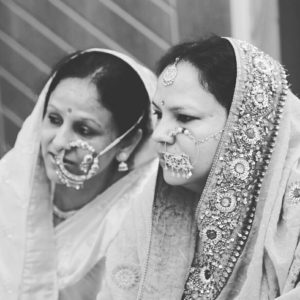 The Pichora is not only symbolic for a bride, but it is also customary for a married woman to wear it during social and religious festivals. Normally, the Pichora is gifted by the bride’s side of the family, however, in some cases; the groom’s side also presents the same. 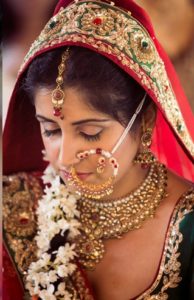 Furthermore, the big gold nose ring called the ‘Nath’ is an absolutely necessary ornament that a bride needs to wear during the wedding and thereafter. After the wedding, the married woman has to wear a black beaded necklace called ‘Chareu’ (just like a mangalsutra) which is a holy ornament in Garhwali tradition. Some brides also wear a very expensive ornament called the ‘Hansuli’ which is like a solid single piece necklace in either gold or silver.