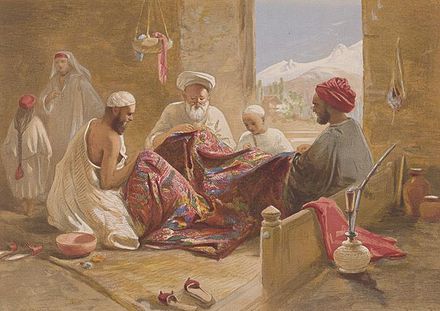 Nikah(also spelled as Niqah, Niquah) is an Urdu word for ‘Marriage’ permitting the man and woman to live as husband and wife in Islam. The wedding attire for a Nikah ceremony follows the sober yet elegant customs of the actual ceremony. The islamic wedding dresses worn during nikah display a wide variety, from sari to shararas, and salwar kameez. The Head is covered with a dupatta as a mark of respect, with a veil or ghunghat drawn to varying lengths, ranging from covering the face only partially to falling as far back as the shoulders. 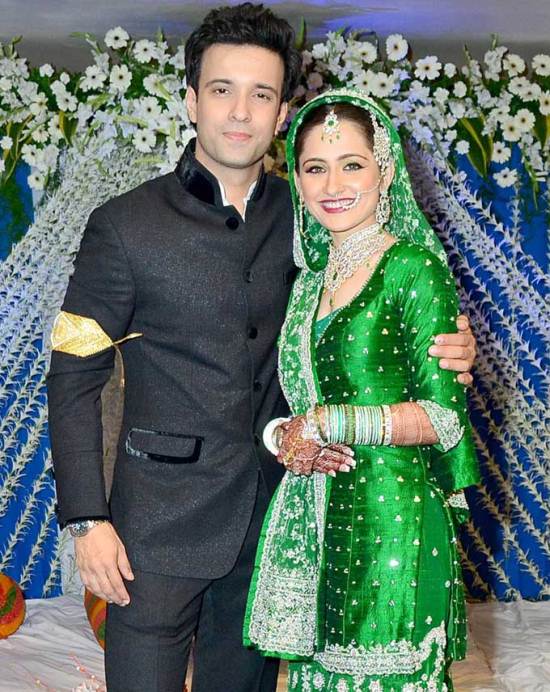 The mehendi ceremony takes place on the first night of the three-day wedding (followed by Nikah and Walima, or wedding reception). Women dress in vibrant salwar kameez dresses and sarees, while some also sport long flowing skirts with blouses called lehengas. The bride traditionally wears an outfit in yellow color, matching the ceremony’s significance, which is application of mehendi or henna paint designs on her hands. She is ushered in under a yellow-colored dupatta held by her female friends and relatives.

On the main wedding day, or the day of the Nikah ceremony, bride typically wears a heavily pleated lehenga in a bright color, traditionally in shades of red, with a long blouse embroidered in gold. A dupatta is draped over her head and styled around the shoulders and waist to keep with the age-old traditional sentiments, while also displaying the fine gold embroidery of the dress and jewelry worn by the bride. 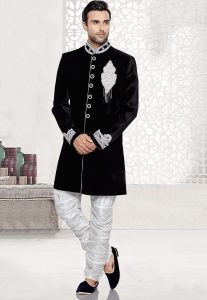 Grooms adorn a traditional sherwani, or a heavy embroidered kurta with churidar pajama, or may opt for a more Western suit outfit. According to customs, grooms may wear a floral veil of roses during the wedding ceremony.

The groom’s parents traditionally buy the bridal trousseau of a Kashmiri bride, complete with clothes and jewelry to be worn on the wedding. Soon after the wedding ceremony, the mother-in-law gifts her new daughter-in-law a husk kaanth or a broad gold bangle along with a gold ring, in a symbolic gesture of lifting the veil and taking the first look of her as a married woman.

The groom wears a sherwani kurta with churidar pajama. He also wears a special turban known as the Karakuli topi as he makes his entrance in the house.

The Bride along with the other women wear gold and silver jewelry studded with precious and semi-precious stones during wedding ceremonies in Kashmir. Women in Kashmir adorn themselves with traditional circular earrings called Kundalas and anklets called Nupura, along with Dekdaman, which is an elegant headpiece worn over the forehead. Necklaces with intricate engravings and ethnic Jhumkas or earrings, heavy gold bangles in delicate designs called Kach Koor and Bingar, gold bracelets with studded stones called Manthoora, the Durcan or big drop earrings, and Pari Hara adorn the bride. The bridal look for Nikah is, however, incomplete without the distinctive Veja Daman, which is wrapped around the wrist and runs in chains along the bride’s fingers and end as rings. 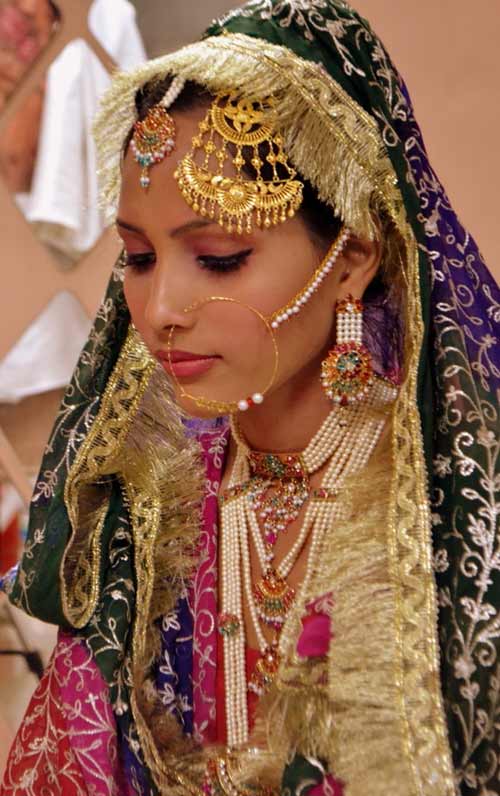 While bridal wear for Nikah in the eastern countries is white or in lighter shades, Muslim brides in India and Pakistan adorn bright colorful wedding dresses on their big day.