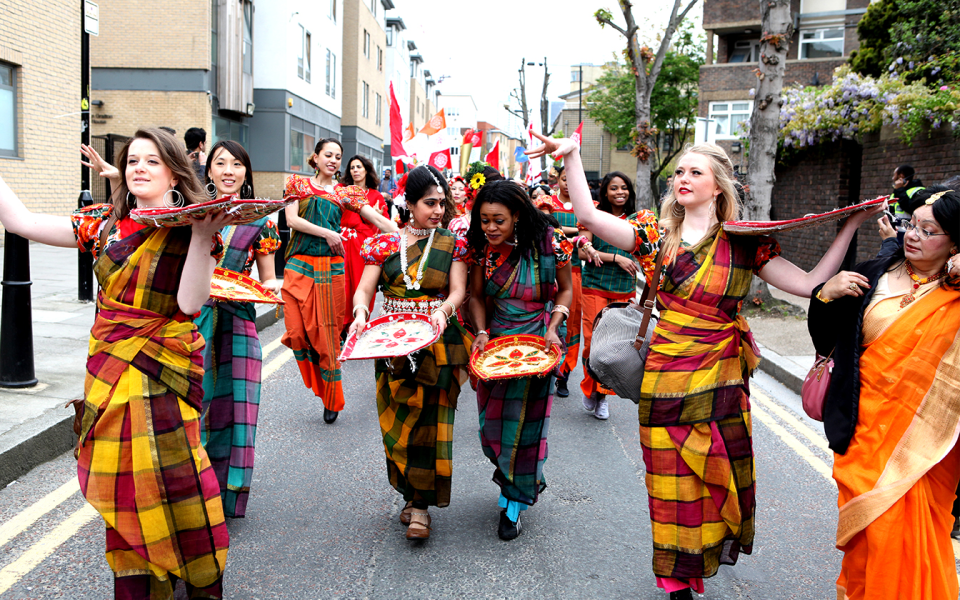 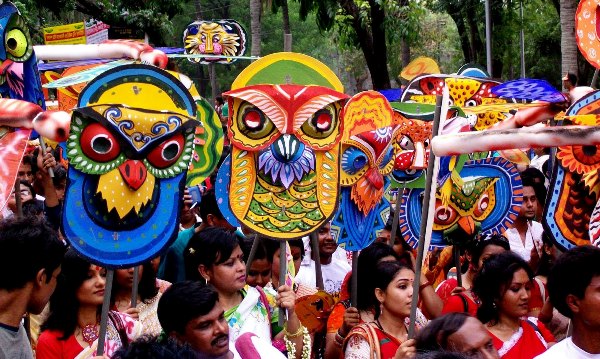 Poila Baisakh (or Baishakh) is a festival celebrated in West Bengal in India and marks the New Year for this community. The word Poila means ‘first’ and Baishakh is the first month in the Bengali calendar, which falls around mid-April as per to the Gregorian calendar. It is one of the biggest festivals in this state. People greet each other with a ‘Shubho Nabhobarsho’ or Happy New Year in the native language and celebrate this day within their families as well as with the larger community.

The Bengali calendar came into being only in the 15th century, and was instituted by the Mughal Emperor Akbar. The purpose of making a new calendar for the state was the levying of taxes. Agriculture has been the mainstay of Indian economy for the longest time, especially in the rural areas of all states. According to the Hijri lunar calendar, the time of tax collection fell out of the harvest season, thereby making it difficult to pay taxes. The Bengali calendar is unique in that it is a mix of both the Hindu solar and Hijri lunar calendars. This calendar was launched in 1584.

The preparation for the Poila Baisakh begins in the last month (Chaitra) of the previous year. Many places hold end-of-year fairs in the month of Chaitra and vendors offer heavily discounted sales on clothing items as well as household items like utensils. The eve of the New Year, known as the Chaitra Sankranti, sees Bengalis visiting the Kalighat temple (as it is the most famous temple in the state, although other temples are as frequented) in order to offer prayers of thanks for the previous year and invoke blessings for the coming year. Families clean and even paint their houses in preparation for Poila Baishakh.

On the morning of Poila Baisakh, people gather together to watch the sunrise as this is considered to be auspicious. Following this, a procession is taken out in area clusters. These processions, known as the Prabhat Pheris, are a sight to behold. Women clad in the traditional Garad sarees (white saree with red border) with a garland of flowers in their hair and men in dhotis and kurtas make the rounds of the area singing songs and performing local folk dances.

There is a traditional custom wherein a special breakfast consisting of soaked rice, fried fish, onions and green chilies is consumed. The rest of the day is usually spent visiting relatives and fellowshipping over specially prepared feasts. Traditional Bengali dishes are prepared on this day.

People worship Ganesha and Laxmi on this day as they are believed to grant long life, good health and prosperity. Since it is also the beginning of the harvest season in West Bengal, people also worship the clouds.

Another traditional practice observed on the day of Poila Baishakh is the inauguration of the Haalkhata or new accounts register. As the New Year is considered to be the ideal day to begin new ventures, all old debts and loans are cleared in the previous months.

Several parts of West Bengal are hosts to small scale fairs, which may be organized by the Residents Welfare Association of the area or even the government of the state. The most popular of these, is the government-planned fair known as the Bangla Sangit Mela. 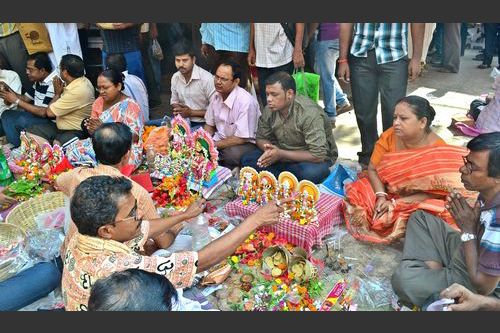 During these fairs, both professional and amateur groups perform local songs, traditional dances and even skits and theatrical performances for the entertainment of the audience. There is a large variety of performances within each of these genres too. For examples, songs like the pala gan, kobigan, gazir gan jarigan, jatra, gambhira gan, and alkap gan; folk songs like baul, bhatiali, marfati and murshidi as well as narrative plays like Laila-Majnu, Radha-Krishna and Yusuf-Zulekha.

Most of these folk dances are performed by women wearing the traditional handloom cotton sarees with broad checks in the weave. They can be in a number of dual color combinations with a thin strip of zari at the border.

Stalls that sell traditional items like handicrafts, cosmetics and clothing items, among others, are set up at the venue. For instance, Shantiniketan handbags, Kantha stoles and dupattas, Tussar silk suit pieces and chunnis, handmade-paper diaries, regional paintings are all very popular items for sale at such a fair. Food and toys are also popular purchases.

Within India, Bengali communities settled in other neighboring states such as Assam, Orissa, Jharkhand and Tripura also celebrate Poila Baisakh with much gusto. The same holds true for foreign countries with a sizeable Bengali population. Australia, UK and Sweden are among those that celebrate this festival with a lot of pomp and show, mostly through fairs known as Boishakhi Melas. 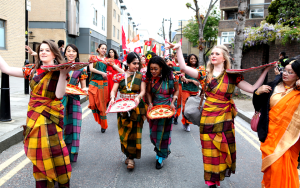 Among the celebrants of the Poila Baisakh, the women are the ones who heavily accessorize their garments. The red bindi is a trademark of Bengali culture and this is complemented with heavy gold necklaces and dangling gold earrings. The jewelry pieces can also have white pearls in them. The men on the other hand, opt for tikkas or tilak from the mandir (temple).

The women performing the cultural dances and songs may either simply braid their hair or wear a checkered cloth over their heads, with a bun underneath.