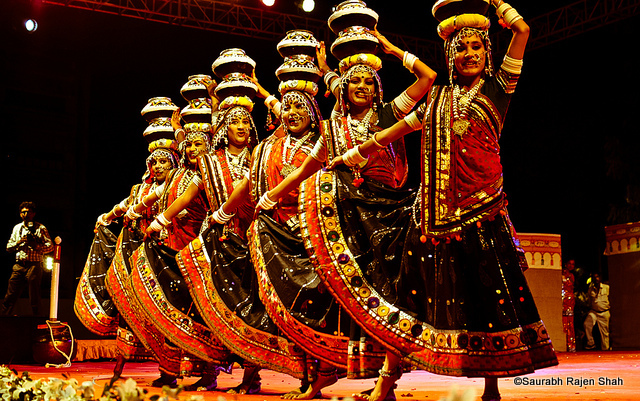 Navratri, which translates to nine nights, is a festival celebrated in India during the beginning of spring and autumn. This festival celebrates the nine forms or avatars of the Devi across India and the celebrations along with the traditional garb vary from region to region. The dates of the festival vary as well and are determined on the basis of the Hindu lunar calendar. During this festival, women and men fast in order to appease the Devi. Some people break the diet on the morning of ashtmi, when the final prayers are conducted, while others break it on the next day. These nine days are filled with festivity and celebrations where women are known to dress in traditional Indian ethic wear.

Navratri dates back to the Vedic Age in India. According to mythology, after the death of King Dooshibago, various royal families wanted to place their sons or husbands on the throne, due to which there was a war. The victor, who turned out to be King Yudhajit, promptly placed his grandson on the throne, Prince Sudarsana. The prince was then introduced to a hermit and his eunuch friend called Kleeba however, on mishearing the name, he pronounced it Kleem which was a syllable used to invoke the Devi, which led to enlightenment and peace in the mind of the king. The king was then praised throughout the kingdom and was blessed to have the Devi by his side at all times.

Navratri celebrations are most common in Gujarat and Rajasthan. During these nine days, Garba and Dandiya parties are held throughout the state. These are forms of folk dance that are widely popular in the state and require one to be extremely enthusiastic and energetic. The songs played during this dance revolve around the Devi as well as Lord Krishna and his many incarnations.

Traditionally, during a Navratri celebration, women have a large variety of ethnic outfits to choose from. Out of these, the most preferred and commonly worn is the Ghagra choli (also known as the lehenga choli). This outfit has three main components, a choli, which is the blouse, the lehenga, which is an full length skirt and the dupatta which is an Indian stole. One of the reasons why this outfit is the most preferred out of others is that the skirt is usually long and flowing, which makes it easier for women to dance as the steps involve a lot of movement.

The choli or the blouse can either be a fitted crop top with intricate embroidery and embellishments or even  like a shirt that goes up to the waist. The dupatta is nowadays more a statement of fashion than it is a garment to cover the ‘modesty of women’ and is generally preferred to use a light fabric with exquisite embroidery like stone work or zari. The lehenga is made of lighter fabrics so that it doesn’t restrict movement. However, the lehenga is embellished with stones, sequins and other such elements that denote celebration and festivity.

Similarly, a bandhini or bandhej is a type print on fabrics like cotton, chiffon, georgette and crepe that is widely associated with Gujarat and, more importantly, the Navratri festival. Bandhini is a type of Tie and Dye cloth that is created by dyeing a fabric that has been wrapped and tied tightly with pieces of string to create different types of shading and styles of this such as Ekdali, Leheriya, Mothra and Shikara. This outfit is usually made of either red, yellow, green, black or blue colors.  The most commonly occurring motifs or patterns include squares, dots, strips or waves.

No matter what type of outfit women choose to wear, a few common aspects between them include abla work, which means mirror work, as well as thick borders. These features make it quiet easy for one to spot and identify a Gujarat or Rajasthani ensemble meant to be worn on Navratri. Although these outfits are most prominently worn on this festival, they can also be worn on other occasions.

The men are known to wear kurta pajamas with bottoms that are similar to salwars or, at times, dhoti pants as well. These are usually red, yellow, blue or black in color and have heavy embroidery and mirror work on them, the same way as the women’s clothes are decorated.

In Bengal, Navratri is known as Durga Puja or Durga Pujo, which means worshipping the Devi. This festival is one of the most important festivals for Bengalis During this festival, an alter or a pandal is set up where people come to dance and prey to the Goddess.

During Durga Puja, women are known to wear tant sarees. These are traditional sarees that are made of muslin and were made popular during the Mughal era. The craftsmen that specialize in creating this garment first start by weaving the cotton to thread and then weaving the thread to form the fabric for the saree. The most common form of this saree is one that is white with thick red borders. However, the newer varieties include motifs and patterns such as paisley and floral motifs.

Women also put mehendi or henna on their hands during this festival. The pattern used by them differs from the ones used by others in the sense that the henna only covers the tops of their fingers (that is, the first digits) along with a circle at the center of the palm. Some women also put white dots around their eyes and on their forehead however, not all do so.

The men usually wear kurta pajamas which are often plain white. The kurtas are long and reach the knees while the pajamas are slim fitted and can be tied with a drawstring.

Other parts of India

While not all parts of India have nine days of festivities like Gujarat and Bengal, women generally wear comfortable ethnic attire such as salwar kameez sets on the day of the final puja.

With global fashion playing a large role in the perceived beauty of a garment, most designers are now creating lehenga cholis and sarees that have blouses that emulate the western aesthetic sense. For instance, the choli for the lehengas is now a crop top and bares the midriff while also having a backless look or spaghetti sleeves.

Navratri is a recognized festival in various countries such as England, Canada and Australia, with people of Indian origin settled in these countries marking these nine days with song and dance. The culture of wearing ethnic Indian outfits has transpired to foreigners partaking in these festivities as well. Lehenga cholis are a novelty for celebrants of different ethnicities who are called to join the celebration.