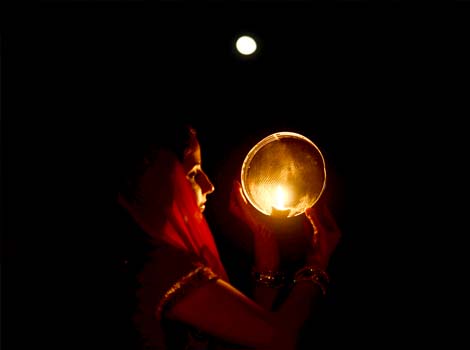 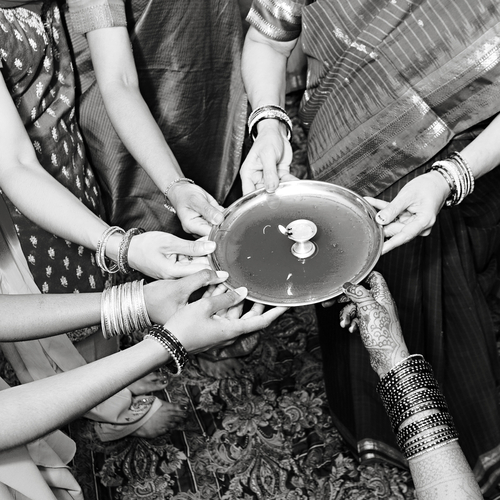 A day that Indian married women dedicate to fast for the longevity, well-being and prosperity of their husbands is called Karva Chauth. It is also spelled as Karva Chauth, Kadwa Chauth. The festival falls in the month of October/November, on the fourth day of the full moon. Women wear ethnic apparels, namely sarees and lehenga cholis, in shades of red, orange and pink with embellished border. This festival is known to test a woman’s will power and strength. Karva Chauth is celebrated in states of Uttarakhand, Uttar Pradesh, western Bihar, Himachal Pradesh, Jammu and Kashmir, Haryana, Punjab, Rajasthan, Chhattisgarh, Madhya Pradesh and Gujarat. The husbands, in turn, offer them gifts as a gesture of gratitude.

The word Karva means pot (earthen pot of water) while Chauth means fourth, in regard to the fourth day of the Hindu calender of the month, Kartik. One of the traditional tales that narrates the origin of the festival is ‘The Legend of Karva’. It is said that a woman named Karva, deeply loyal to her husband, had strong spiritual powers due to her dedication and love. Her husband was once caught by a crocodile while bathing at a river. Karva captured the crocodile and asked Yama (the god of death) to send it to hell. When Yama refused to do so, Karva threatened to curse and destroy him.

Yama, frightened of a devoted wife’s power, sent the crocodile to hell and blessed Karva’s husband with a long life. There are other myths which revolve around this festival. One hypothesis being that the military campaigns and traveling usually commenced at this time, therefore, women prayed for their husbands’ safety during this endeavor. The other story states that earlier, young teenage girls used to marry and live in their in-laws’ remote village. During the wedding, a custom began which made it mandatory for the bride to befriend a girl from her in-laws’ village who would be her companion during tough times in her marriage. This woman was to be the bride’s god-sister or god-friend. Although, this is said to be the origin, the husband is the primary reason for this festival because it is a woman’s marriage to him that leads her to the god-sister.

During the festival, women shop for traditional adornments like choodi, payal, ghungroo ,etc. They buy new clay pots and paint them with beautiful designs which are filled with jewelry, home-made sweets, ribbons and clothes. These pots are exchanged among the women on the day of Karva Chauth. The two most important gifts during the festival are Sargi and Baya, as they bring good luck to the married couple.The sargi has sumptuous food like sweets and sometimes clothes.The mother-in-law hands this to the daughter-in-law before sunrise so she can eat it before her fast begins. Baya is a collection of mathris, almonds and few gifts, given by the girl’s mother to the son-in-law, which is supposed to reach the girl’s house before evening.

The fast begins at dawn and women do not drink water or eat for the entire day. Traditionally, they are not supposed to work and instead apply henna and makeup on each other and meet relatives. In the evening, women from the neighborhood come together dressed in their festive sarees or lehengas to sit in a circle with their puja thalis and sing folk songs and narrate legends of Karva Chauth. Later, they offer baayna, an assortment of food like halwa, puri, namkeen etc. to the idols and hand it over to their mother-in-laws.

Post the baayna offering, the women await the rising of the moon. Then they view the moon’s reflection in a vessel filled with water through a sieve. Water is offered to the moon to earn blessings and then they view their husbands in the same manner. The husbands take the water from the thali and give the first sip to their wives and feed them the first morsel of the day, this breaks the fast. India being diverse in traditions, this ritual differs from state to state.

Wearing the Attires for Karwa Chauth

During Karva Chauth women indulge in exquisite traditional clothing and heavy jewelry. Color palette primarily revolves around red, orange and yellow. Some dress up in bridal attire to reminisce her wedding and some experiment with the silhouettes of their sarees, anarkalis and lehenga cholis in order to preserve cultural value and add a fashion factor.

Traditionally, women do not work but in the present time, working women dedicated to celebrating Karva Chauth do not have the liberty to the same. The festival has also observed unmarried women fasting for their future husbands, although it is not universal. Another point noticed was women practicing Karva Chauth in states like Bengal and Maharashtra, who have not traditionally celebrated the festival and were once unaware of its existence.