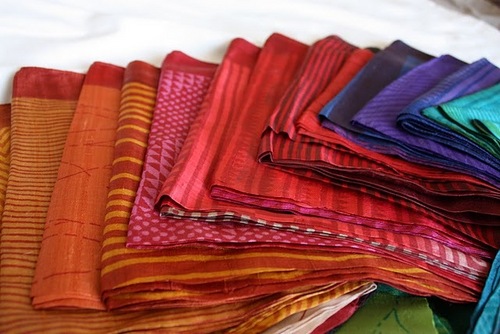 Tussar Silk , also often referred to as ‘Wild Silk, Tassar Silk, or Tusar Silk is an exquisite thread obtained from a wide winged moth that is yellowish-brown in colour. The scientific name of these moths is Antheraea Paphia and they are a part of the group known as Emperor Moths or Saturnids. These moths are a true wonder of nature. Their wings are embellished by circular markings that look like a mirror. Indeed, when you look closely into those circular markings, you’ll be able to see a reflection of yourself.

Kosa Silk is the Sanskrit name of Desi Tusser. Produced mainly in India, Tussar is highly valued for its natural Gold colors, which it inherits from the Antheria Paphia, Antheria Milita, and Antheria Proylei. As far as the history of the origin of Tussar Silk is concerned, there is very little data regarding the time of its origin.

However, borrowing from the history of raw silk, it can be said that Tussar silk was a discovery of the medieval times. Prior to that there wasn’t any trace of Silk being made out of any other natural or artificial object in place of mulberry fed Silk works.

The cost difference between Tussar silk and other forms of silk arises from the fact that the former is not fed on mulberry. In fact it is the rearing of the Tusser silk worms that makes them a cheaper variety. That said, Tussah silk is as illustrious a variety as any other.

A lot more textured than mulberry silk, Tussar silk is used in creation of Tussar silk sarees and silk suits. Indian attire inspired from traditions and values easily take shape in Tussah silk. The dull gold texture that it radiates works as a suitable base for embroideries as well as print motifs that have been inspired by nature. Floral patterns as well as those in the shape of trees, bels, buds, leaves and leaflets are enough to spark creativity and serves as a source of inspiration for Tusser silk. 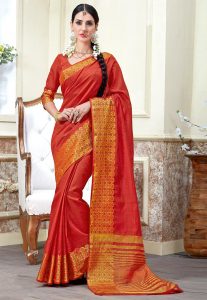 India is the main producer of Tussar silk with Jharkhand being the main state of its production. Producing Tusser is a rural art. Traditionally, the women of the tribal and rural areas were trained in weaving Silk out of cocoons and weaving fabrics out of the threads hence obtained. Like most of the other textile arts, Tussah too became a fabric of mechanization.

The Tussar silk industry makes extensive use of rural and tribal labor. The women who are absorbed by the industry are trained in the production of Silk. It takes them 3 days to finish a single 10 meter Tussar silk cloth. For each employed labor, the task is to weave at least 10 Silk sarees in a month. Each Tusser silk saree is sold for Rs. 3000 to Rs 3500. While the rural women who are involved in making the saree earn between Rs1500 to Rs2500 for a single saree, the town women get a higher wage for the same job.

Tussar, which is itself a variety of Silk, can be further divided into various subcategories like Katia, Ghhichha, Thigh reeled and machine reeled. On further permutation and combination of these varieties two distinct varieties named as Tusser Ghichha and Mulberry Ghiccha are obtained. 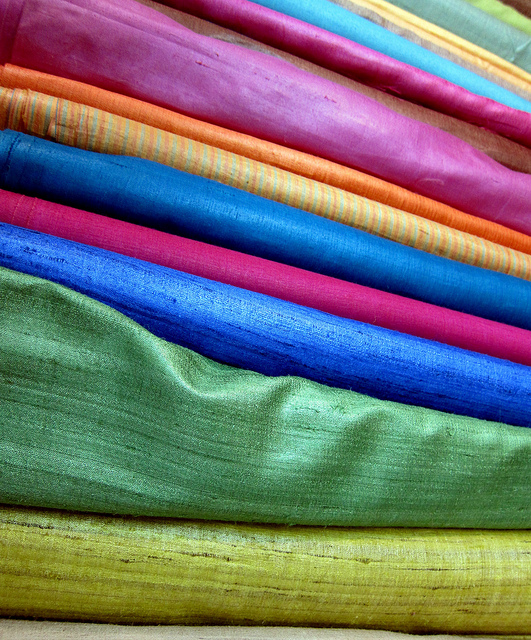 As far as the maintenance of Tussah is concerned, it is not a difficult fabric to maintain. Two things however, need to be taken care of. Firstly, the fabric should be prevented from any kind of stains. Secondly, it should be prevented from losing its sheen and luster. Ironing Tussar sarees and suits, as well as getting them dry cleaned once in three months ensures that your ensemble will never lose its freshness.

– The worms that produce Tussar silk are not fed mulberry leaves.

– Kosa is the Sanskrit name of Tussar silk.

– Jharkhand in India, is the main producer of Tussar Silk